The Times of Venerable Father Agnelo 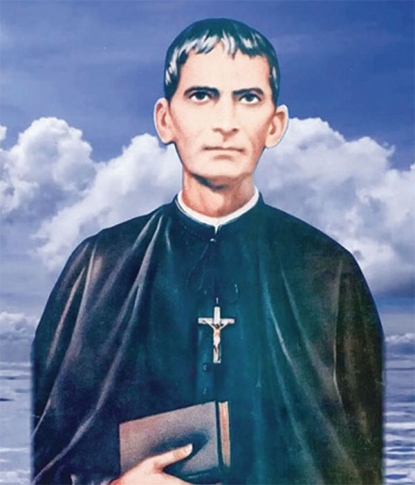 “Padr Agnel”, as he will always

be in the hearts of Goans, was born on 21st January 1869, over 150 years ago. By then Goa was well entrenched into a Portuguese colonial lifestyle. The people mostly lived-in the villages and Anjuna, the birthplace of our beloved Venerable, was and still is a village of the most breathtaking scenic beauty, deep calm and stillness. And amidst this beauty, calm and stillness lived a family of holy disposition.

Large families were common in those days. in fact the colonial rulers would acknowledge and reward such large families. Agnelo was born in a family of nine children, 8 boys and one girl of which he was the 6th. His father was Miguel Arcanjo Mariano de Souza and his mother was Maria Sinforosa Perpetua Megalhaes. This was in keeping with the extended names of those times. In fact Agnelo’s full name was Angelo Gustavo Adolfo de Souza. Today, the trend is just name and surname. A friend in London had to be asked by his Parish Priest to include a Saint’s name to the dual Baptismal name chosen for his son.

Tragically, Agnelo lost his both his parents when he was just 11 years old. This was not uncommon in those days when health facilities were the bare minimum. Thankfully, by then Agnelo was already raised up to be a responsible, religious and caring boy. His father had taught him the ways of discipline and hard work and dignity of labour through his own labouring on their family lands. His mother instilled in him the virtues of faith, love and reaching out to help others. In fact as she lay on her deathbed she had all her children gathered around her and told them that henceforth their mother would be “Saibin Mai” (Konkani for Mother Mary).

This was a shattering experience for the children who were now under the custody of their paternal Uncle Fr. Lazaro who had already seen the pious disposition of Agnelo and had once uttered words which turned out to be prophetic: “Agnelo will one day become a virtuous priest and a renowned Preacher”.

Indeed Agnelo turned out to be both a virtuous priest end a renowned preacher. But this was only after a rigorous 10 year priestly training at Rachol Seminary and a crucial almost 10-year period of seclusion, fasting, sacrifice and intense prayer within the imposing walls of the Pilar Monastery which was then ensconced on a lush forested hill slope called Pilar after Our Lady of Pilar whose statue was previously brought to the monastery by the Franciscans. Agnelo’s Pilar was surely a far cry from today’s Pilar Complex with its added modern structures, gardens, tarred roads and electricity.

Providentially, these years of Fr Agnelo’s withdrawn life turned out to be the ground for the spiritual foundation and launching pad for his future life as Priest, Shepherd, Guide and, above all, as Preacher of God’s Word.

Even as a boy Agnelo had a frail physique which followed him into his priestly life making him prone to illness. While studying at the Rachol Seminary he had to be given special leave to board with a neighbouring family. His otherwise commendable role as Parish Priest of Kumta and later Savordem had to be curtailed. But his years as Spiritual Director at the Rachol Seminary was a major and crucial contribution to the Church in Goa as he trained, counselled and inspired many Seminarians who would later, now as priest themselves, unhesitatingly gave glorious testimonies of Fr. Angelo’s saintliness and life of heroic virtues.

A standout aspect in the life of Fr. Agnelo was his meekness and humility, always obedient to his Superiors. He was always the last to take his place at the meals table and that too at a corner place. In fact this corner position is maintained even today at the Pilar refractory. The name Angelo was taken from the name Agnes (the Saint on whose feast day he was born) which in turn is taken from the Latin word “agnus” meaning lamb, as in the Agnus Dei during Holy Mass.

Once, Fr. Agnelo and his companion reached a Church, where he was to preach, late into the night. The Church was locked and the caretaker asleep inside. But rather than disturb the man, Fr. Agnelo insisted that they sleep outside under a tree. That was our Padr, meek and humble to the core.

But undoubtedly, Fr. Agnelo’s greatest contribution was as Preacher (Pregador in Portuguese). Under the guidance of his Superiors, he would take assignments in far and near Goan Parishes. In those days, preaching at Novenas would mean nine continuous days of sermons by the same Priest, who would probably stay at the church presbytery. Today, according to individual priest’s schedule and for the sake of variety, one priest gives sermons for 1 to 3 days.

In those days priests did not have the “luxury” of a microphone, so they had to preach with fire in their bellies. They would stand in an elevated pulpit positioned in the middle of one of the side walls. People would turn around to face the preacher. Then, benches/pews were few if any. Today’s Gen-X would have not heard a sermon from a pulpit! Inevitably, yet sadly, the pulpit has become a decorative items in our Churches.

Tragically, the pulpit was to the beginning of the end for our beloved Padr Agnel. He collapsed after prematurely ending his final sermon on the occasion of the Vespers of the Feast of the Sacred Heart of Jesus whom he worshipped with all if his frail heart. Fr. Agnelo departed for his Heavenly abode in the early hours of 20th November 1927.

The Feast had to go on but in an abridged and sombre manner. Festive decorations gave way to funeral drappings. The Goan faithful from all over began flocking to pay their respects to their beloved Priest and they have not stopped till today daily converging to where his remains rest at his beloved Pilar Seminary.

Goans are storming the Heavens for the early elevation of their favourite son to Sainthood in the Holy Catholic Church, according to God’s holy will.

Let us all continuously strive to live our lives in imitation of our saintly Fr. Agnelo. PADR AGNEL MAGH AMCHE PASOT.