The first King Momo talks about kingdoms and kinship

He is the first King MOMO ever, perching himself on a bullock cart hired from Merces and was responsible for selecting the kings for several years later. This tradition has become the living history of the Goa carnival, inspired by the one in Rio, Brazil. Timoteo Fernandes spoke to the Café about his memories from those days. 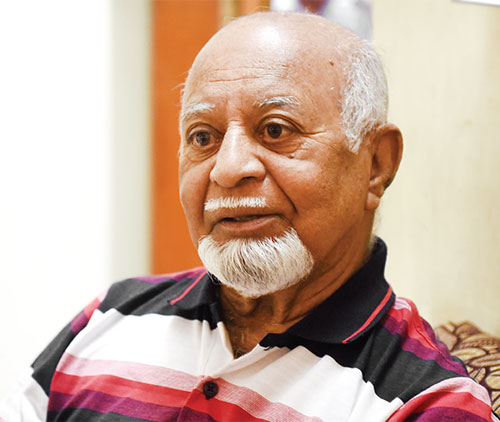 He is a man who showed others the way. Today when King Momo holds sway during his four day reign, people should thank Timoteo Fernandes for the role he played. In 1965 he conceived the idea of organizing a carnival parade after reading about the carnival in Rio de Janerio in a magazine. Yes, that’s how it all started.

It started in a very simple manner. Timoteo said “I used to be good friends with the late Vasco Alvares who used to be the President of the Club Nacional. He used to invite our group to perform for parties at his residence. One day at this house I picked up a magazine called the Carnival of Rio de Janeiro. He used to get the magazine from a family member based in Portugal I think. This magazine gave me the idea and the inspiration to organize a fun carnival on similar lines in Goa. Taking a cue, I gathered some of my friends and hired a bullock cart from Merces and perched myself on the cart as King Momo. I was accompanied by some musician friends; I started this King MOMO Fun Parade as it was called then from Old Patto Bridge and ended at the Municipal garden in Panjim. Remember this was in 1965. There were no crowds, in fact no one knew who or what King Momo was. ”.

This was repeated in 1966 and this time the Panjim municipality provided him with a jeep for King Momo. He had managed to arrange five musicians and they went down the same route that was taken the previous year. By now there was some buzz and in 1967, the state government paid attention and set up a government level committee in which Timoteo was a member. In 1967, there was the first officially organized Carnival Parade with him as the first king Momo. It was the first time crowds began to pack the roads to participate in the happy occasion.

In 1977, he had the privilege of being present on the very first float to represent Goa at the Republic Day parade. He was of course essaying the role of King Momo. Speaking about his experience as the first ever King Momo, he said it was all about fun, where everyone in Panjim joined in the fun. Nothing he said was structured like it is today. As king Momo his job was to encourage everyone to have fun. He said it was intimate, everyone knew everyone else but today it had turned into something very big. Timoteo said people came from different villages dressed in impressive costumes whereas now it was all much more polished. He however emphasized that it was important that people have fun. Now people were spending a lot of money on the floats as well as the participants which was not the case earlier.

From 1967 there were several dancing groups, especially in 1974 when Francisco Martins brought a big dancing troupe with music. After that people imitated him and participation of dancing groups increased.

In the south, they were enthusiasts and the joined parades in different dresses on cycles, motorcycles with children participating in great numbers. This forced the central committee to create new categories.

He also selected people who went on to become King Momo in the following years. He was in the carnival committee for forty three years. Asked what he looked for in the ideal candidate, he said he had to be of a jolly personality and had to be fat.

Timoteo is one of four brothers who over a period of time all were crowned as King Momo over the years. One of them, Tome Fernandes, was king Momo for six years.

Speaking about the future he said participation of groups in the carnival was increasing every year and he hoped this would increase which would guarantee more fun. He said “People from different parts of India and parts of the world come to Goa to watch the Carnival time and I estimate the numbers are increasing by 20,000 every year. I want this to continue. The government is paying very well for the various categories. This will encourage more people. I strongly believe the Carnival will continue to grow and get stronger in the years ahead.” One can only hope his dreams come true.