The many sides of Anupam Kher

Versatile and renowned actor Anupam Kher has worked in 532 films, and is still hungry for more great roles. Sharing his thoughts on the change of perspective towards cinema in India, he feels no one can be blamed 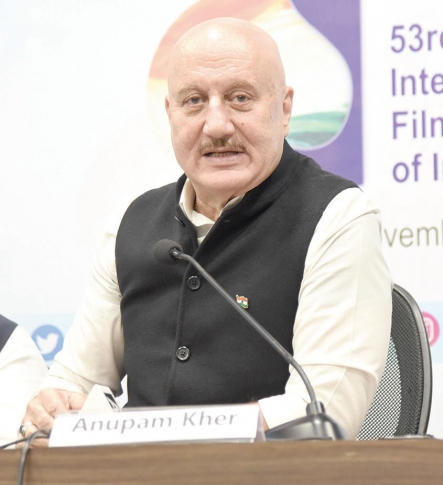 Anupam Kher needs no introduction. He has made the audience laugh and cry and in every film, he showcases a new layer to his acting abilities, in films from across the world. While in ‘Kashmir Files’ he bared his soul. for ‘Uunchai’, he showed that the elderly too deserve to have fun.

2022 has been a great year for Anupam Kher as big stars have flopped at the box office but his films have received rave reviews. “The world says it’s my best year. According to me every year is my best year and I give my best. But the problem is that everything is measured by box office and by money. I feel that I’m rich without money. I live in a rented apartment. It liberated me the moment I decided I don’t want to live in a bought house. It makes me happy. This year, ‘Kashmir Files’ made 350 crs, ‘Karthikeya 2’ made 130 crs and ‘Uunchai’ made 25 crs in a few days. From that point of view, it’s a great journey,” says Anupam Kher.

The box office has been quite a reality check for filmmakers and actors since people have started going back to cinemas. However, Anupam is humble yet flying high on the success of his three films in the year. “The lockdown has changed people because everybody has dealt with their own fear, insecurities, turmoil and have lost someone dear to them. They don’t want something that is pretentious or fake. ‘Kashmir Files’ has no songs or comedy and still it was a superhit. ‘Karthikeya 2’ has no romance angle and ‘Uunchai’ is about people above the age of 65 years. It’s important not to blame the people and it is not our fault also because it is like churning for something good. I think this is the churning period and something nice will come out,” he shares.

Post the pandemic, the world has opened up with a new perspective to cinema. “During two years of lockdown, people saw unbelievable cinema, whether it was world, regional, Assamese, Tamil, Telugu or Malayalam. They discovered that there is more to entertainment than just a certain section of cinema. They will demand that kind of sincerity and realism in the movies,” he explains.

Speaking about his preferences for web series, he says, “I’m looking at something substantial. There are some works which have come out recently. I have also worked for Neeraj Pandey. I do anything that he asks me as I like him as a person. I’m doing one web series with him. I have also done a guest appearance in another story. But if something nice comes, I will certainly take it up.”

Anupam is also known for his roles in Hollywood films like eight Oscar nominated film, ‘Silver Lining Playbook’. “I have 2-3 scripts which I’m in the process of reading. I think it will take 10-15 days to decide,” he informs.

As a writer, Anupam has written three books, ‘Aap Khud Hi Best Hai’, ’Lessons Life Taught Me Unknowingly’ and ‘Your Best Day is Today!’. His personal favourite book is Irving Stone’s ‘Lust for Life’, a biographical novel on the life of Vincent van Gogh. While searching for his break in the film industry in Bombay for three years, Anupam constantly exchanged letters with his grandfather in Shimla, who also motivated him with his wise words. “My grandfather was Pandit Amarnath, he was not a writer but a very learned man. I dedicated my first film, ‘Saaransh’ to him,” says Anupam, as he has dedicated ‘Kashmir Files’ to his father, Pushkarnath Kher.