The not so uncommon men and women 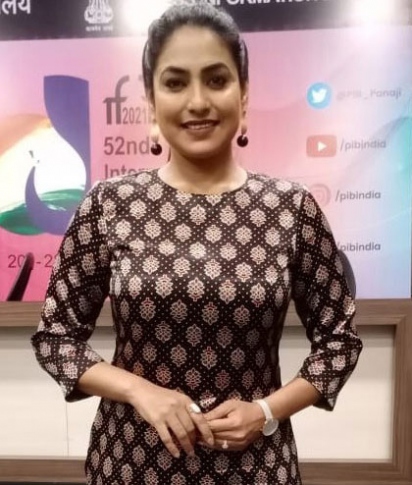 The work of people who do jobs everyday without being recognized or appreciated or of people who do something that is so great but is still not recognized were subjects of films screened yesterday. The “Creation of Gangaputra is a documentary on the life of Raja Ram Tiwari, a selfless social worker. It is a kind of documentation of his unique work. Dressed in a simple dhoti and sadra and known as ‘Bhule Bhatakwalon Ka Baba’ (Savior of the Lost). Raja Ram Tiwari sets up ‘Khoya Paya’ camp-tents to reunite lost pilgrims with their loved ones during the Kumbh Mela. This has been his lifelong work. In 1946, he set up an establishment called ‘Khoya-Pay Shibir’. More than 21,000 missing children have been traced and reunited with their parents so far. Despite his death in 2016 at the age of 88, the camp is a beacon for the devotees of Kumbh Mela, Ardh Kumbh Mela and Magh Mela, serving the needy with unparalleled enthusiasm and dedication.

Speaking about the birth of the film, the director said that the film showcases Raja Ram Tiwari’s unique and consistent efforts on the silver screen, which has lasted for more than 70 years.

Prakash gave a detailed account of how his team made special efforts to enable the audience to experience the scope and grandeur of the contribution of social workers. The ‘Khoya Paya’ camps set up by Tiwari get help from the administration and the police. Prakash appealed to Tiwari’s ongoing humanitarian efforts to get official recognition. He hopes that the audience across the country will get to see the selfless work of Raja Ram Tiwari through this documentary and his work will be noticed.

21st Tiffin – a film with a protagonist without a name, for a reason which is as ordinary as it is extraordinary. Explaining the curious portrayal of the character, Director Vijaygiri Bava says: “It’s an intimate story on human emotion and relationships. We have tried to depict the lives of all women who have lost their identity, in the service of others. That’s the reason we have not given any name to the protagonist.” The film is based on Gujarati writer Raam Mori’s Sahitya Akademi award-winning book. He was also present on the occasion.

The Director said that his movie tells the story of a middle-aged woman who is busy serving others within her family and outsiders by providing tiffin box. The lady runs a tiffin service by herself, in addition to performing her various duties as a wife, mother, daughter, sister and friend. It turns out that in this process, she ends up never bothering about herself. Her daughter Nitu notices that her mother plays all her roles well, yet finds something amiss in her behaviour. Things change when a young boy named Dhruv, who comes to the lady as the 21st customer of her tiffin service, begins to appreciate her. This sudden entry of little admiration takes away the affliction in the lady’s behaviour.

Nilaam Panchal who essays the role of the mother said it was something that was common in almost every household. She said the response of the audience at the screening was remarkable. They surrounded the group and congratulated them and would not let them go. Everybody recognized the fact that she had a role everyone recognized. She was just a mummy, a person without a name and a personality of her own. She said “Being a mother, she has lost herself and monotony has entered her life. She does not receive any appreciation”. The shoot lasted eight days. The director Bava said Gujarat was usually known for business and trade, but there are very good artists in the state. “Our art and artists are underrepresented on national and international platforms.

Then there is the simple quest of a simple and self-effacing ice-cream seller to discover life and its meanings. Set in rural Bengal, the Bengali film by Director Satrabit Paul is about simple people and their simple lives. In keeping with its name (meaning “very easy and simple”), the story and the characters too portray simplicity at its finest.

The Director revealed the wellsprings of inspiration which led to the provenance of the movie. “I have been witnessing the characters of the story ever since my childhood. The role of the protagonist is based on a real life ice-cream seller from my school who used to come in his cycle and sell ice-cream to little kids. I got the inspiration of my main character from him.” Paul said this, while addressing a press conference, on the sidelines of the 52nd edition of the festival, in Goa today, November 23, 2021. The film has been screened at IFFI under the Feature Film Category of Indian Panorama Section.

Describing the film as a black comedy, Paul said: “The film revolves around an ice-cream seller from Haldibari, a border town in West Bengal. He happily travels through the remote areas of rural Bengal for work. While travelling to remote villages for his work, he experiences both good and bad things during his journey, which teach him the meaning of love and life.”

In the film, the ice-cream seller goes to a mela, which symbolizes life itself. Like in life, the ice-cream seller encounters different kinds of people on the way. While some try to help him reach his destination, others mislead him. “My protagonist goes from city to villages for work because he doesn’t like the hustle-bustle of city life, sometimes he doesn’t want to sell ice-creams and for that, he gets scolded by his manager, but he is not bothered. One day, he meets a man who tells him about a mela, a meeting place.”

Shot in black & white, the film is a satire portrayed through the eyes of the storyteller. The events take place when he embarks on the journey to the mela. He loses his cycle, his only source of livelihood on the way, but he gets its back again. In the end, the ice-cream seller couldn’t reach his destination but he met a man who was returning from the mela. The man said his hunger got satiated but his heart’s desire remained unfulfilled. Paul said in life too, we have many dreams and wishes but most of them remain unfulfilled.

The Director told film delegates how the story progresses with the beats of the bell of the cycle. “The film doesn’t have any background music, the only music is the sound of the cycle of the ice-cream seller.”

It is obvious the common man and woman is well represented at the film festival.