Yet another violation in Old Goa.A structure being constructed on heritage land and those responsible don’t seem to fear anyone. What is the solution to all this?People involved in fighting for the heritage of the State presented their views 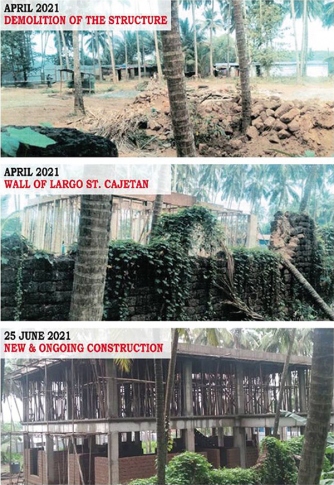 Construction taking place in heritage land is not something new in Goa. It’s happening in Old Goa and it has caused a great deal of a stink. The question that is begging to be asked is why does it keep happening in Goa? Why is a policy not in place to ensure this does not happen?

Heta Pandit Heritage activist said this was a classic case of irregularly obtained permission. She said this permission had been obtained from the Panchayat and the TCP. The person who obtained the permission, she said, showed a house which actually was in Pernem. She said” Since this was a protected area it fell under the ASI act and they are the only people who give permissions. In addition it looks like it is within 100 metres of the high tide of the river bank”. When asked if they had pushed for a policy she said they had been rooting for a policy for the past 21 years. She along with Poonam Mascarenhas, Raya Shankhwalker, she said had been pushing for this.

There were, she said, 900 properties in Panjim itself which were listed by an NGO of very limited means. She said “What stops the Town and Country Planning Department to do a proper inventory of heritage properties. We have been writing for years for regulation. There is a heritage policy but policy is not an executive document.. From that policy you can create guidelines. It has not been done. The government created a basic list in 1986 which made no sense. It had the name of the person and the village. It makes no sense. Listing guidelines are available all over the world. We follow the Indian National Trust for Art and Cultural Heritage (INTACH) process.”

Prajal Sakhardande Professor of History at Dhempe college of Arts and Science in Goa was his usually blunt self when he said “The Old Goa illegal construction is a serious case of all types of violations. First and foremost being an UNESCO designated World Heritage site no construction can come up within a radius of 1 km. Secondly the ASI national rule mandates a buffer zone of 300 metres from the monument similarly state archaeology rule of 100 metres plus this construction apart from flouting all the said rules also is a CRZ , CZMA violation. There are violations galore for this special construction. What do we need to know. We do not have a Heritage policy in place. We have been pressing for heritage rules and regulations for long but to no avail”.

Poonam Mascarenhas laughed heartily when asked why this was being allowed to happen. She said “We have been asking these questions since 2000. How did they give permission to a plan that showed a house that actually is in Pernem. The owners claimed the house was being reconstructed. The authorities know what is happening”.

The Goa Heritage Action Group in a press release provided details of the violations. It pointed out that for the last 20 years and until December of last year there was a hut in the plot adjoining St Cajetan Church made of traditional material. Now there is a huge concrete monstrosity, which has been constructed while residents of Goa have been indoors due to the second wave of Covid. This was the private construction of an individual. The group revealed it had three reports of the ASI Goa which exposes the truth behind this construction. In report1 the ASI concluded that since the proposed construction was entirely new, permission could not be granted as it falls within the Protected Area, only repairs to the existing structure as it is, may be granted without any addition to the structure. Technically permission in protected areas is beyond the term of reference of the ASI Goa. In spite of this report, the state TCP Department and CRZ Department has given permission for reconstruction of a large structure here in 2016.

The law states that ASI Delhi cannot permit any construction in the protected area. They can permit repair of an existing structure. However as per the second ASI report it concluded when the application for repair was filed, there were so-called existing photos attached. But upon reading the ASI Goa’s report, they concluded it was fraudulent. The report said it was relocation, with major additions and alterations and any technical person would say it was a repair, not reconstruction but a completely new construction.

The third report from the ASI which was a show-cause notice dated April 2021 pointed out that despite all this being pointed out the construction continued.

Tahir Noronha an architect who is from the Charles Correa Foundation in Goa said the problem was that everything went through committees who decided everything on a case to case basis. Unless a policy was not in place, this he said would continue to happen.

A policy was a need of the hour. A policy that reflected the needs and aspirations of the people of Goa.