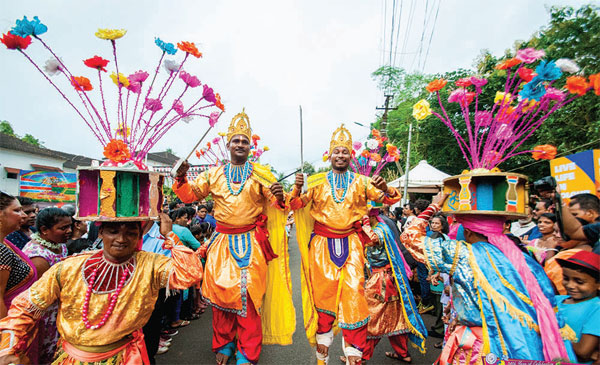 I recall a conversation I had a couple of years ago with my late father, Eurico da Piedade Menezes, where he told me that when his family arrived in 1962 from Pune to settle down in their ancestral home on the island of Divar, my grandmother had fired out this old Portuguese phrase “Agosto é mês do disgosto” meaning that August is an unpleasant month, to my grandfather. But for my father, as a young lad right till his passing away in 2016, Divar was always “the island in the sun” that he associated with the popular song sung by Harry Belafonte.
He told me that his family had arrived on the island in the right month of the year when it was full of greenery everywhere and the crop was ripe for harvest. This event was celebrated annually as the “Konsachem Fest” which was preceded by the flag procession on the previous day. Today, it is famously celebrated as the “Bonderam Fest” and my father took great pleasure in setting out the history behind this event in print regularly over the years. As I was going through his articles which were preserved for reading pleasure, I could not resist not sharing this information, painstakingly researched by him and experienced during his lifetime, with all who might have an interest. The “Bonderam Fest” was celebrated on the fourth Saturday of August every year on the island of Divar which is 12 Kms from Panjim. Bonderam comes from the Portuguese word “Bandeira” meaning flag. The story of the Bonderam festival is in itself quite interesting. During the Portuguese regime in Goa, frequent disputes were witnessed between two sections of the island village, i.e. Piedade and Sao Mathias. Incidentally, these two sections have two Panchayats and two communidades. In the days gone by, the festival was celebrated by the two communidades on the same day. But the people of Piedade would not cross the boundary and enter Malar as an intrusion on this particular day would erupt into mock battles and sometimes, end in bloody duels. To avoid any untoward incident, the Portuguese demarcated a boundary which exists even today. On the day of Bonderam, flags of different nations were placed on the boundaries. The rival groups would however, knock down these flags with stones to mark their displeasure. Mock battles were held using toy weapons made of bamboos, used as guns, and wild berries as missiles. These were to remind people of the days of rivalry and to remember the lesson they learnt from it. People fired at each other and had a good time. These were taken in good spirit and later on, they would gather to have a feast together. On the next day, the harvest feast, “Konsachem Fest” was celebrated with a High Mass followed by cutting of the first fieldcrop, to thank God for the bountiful harvest. The brass band would accompany the procession to the field and everyone would be in a festive mood. Patoleo, a rice pancake filled with grated coconut and jaggery and steamed in turmeric leaves, was the main sweet to commemorate the occasion. In the recent years, the festival has taken a carnival ambience. It is celebrated by Piedade Youth Association and Sao Mathias Sports Club on two different Saturdays. In Piedade, it begins with the sound of the Alvorada played by the brass band at the break of dawn. The annual flag march commences in the afternoon and is followed by a fancy dress/talent contest and the float parade. The wards in each section organise colourful floats accompanied by song and dance performed by the members of each ward dressed in pretty colours. There are prizes awarded for the best floats, which have a rich local flavour. In recent years, the entertainment is continued with music performances played by DJs or live bands/performers till late evening. The festival has certainly become a popular tourist attraction and is now prominently displayed on the world map of festivals. Wishing the PYA all the best this year too! Hope to see you there. Viva Bonderam!
Related news