Vibing to Sao Joao beats in the UK

Sao Joao was celebrated with great pomp across Goa, but the chants of Viva Re Sao Joao reverberated in the United Kingdom as well this year. Goan brethren continued with the tradition of wearing Kopels - headgears adorned with fresh flowers and fruits - with great excitement as they celebrated the feast of St John the Baptist at Hounslow 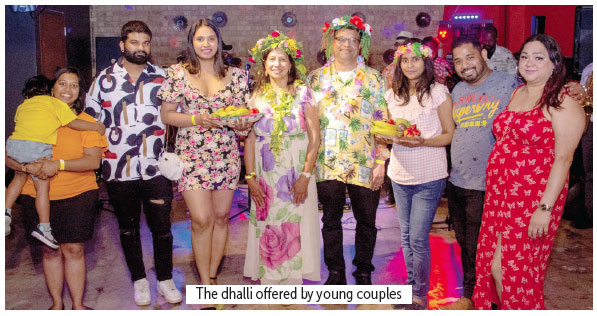 Goan traditional culture is so enticing that one can’t just leave behind the heart thumping beats of the ghumot or sounds of the trumpet. The same goes for the lively celebration of Sao Joao, the feast of St John the Baptist. This year, Goans in the United Kingdom were literally given a nostalgic trip to Goa through the traditional celebrations at Viva San Joao 2022, organised by Amigo Events at Market Place, Hounslow High Street.

Simon Rodrigues, the founder of Amigo Events, has been in the United Kingdom for the past six years and has been organising events for Christmas, Easter, Carnival and Sao Joao since 2019, but all with an emphasis on Goan music and food. This Sao Joao was no different. “The crowds poured in from places like Northampton, Leicester, Oxford, Croydon, Southall and Wembley even though the country was facing a train strike. The entertainment for the evening included one-man band Iggy Fernandes, live band M25 and the surprise element of a brass band which was a real treat to the Goan audience. Other traditional activities included the ‘kopel’ competition for kids and adults, the jackfruit weighing competition and Bingo,” says Simon.

Simon moved from Vasco to Hounslow with his wife Risma and children. Risma is the daughter of legendary tiatrists Christopher and Meena Leitao. Simon and Risma had also organised a show earlier in Goa in their memory. ‘Chrismeena Ugddas Tumcho’ in May this year at Ravindra Bhavan, Margao. “I love to organise events in the UK as it brings together Goan families even if it is for a day. It also promotes Goan musicians and bands and through their performances, they even get bookings for their next show,” says Simon, who virtually held Carnival and Easter over Facebook in 2021 with Goan musicians.

Master of Ceremony for the Sao Joao night, Simon Varella from Uxbridge, London, is originally from St Estevam. “It was nice to see the newlywed couples that took part in the Sao Joao parade with Dhali, the traditional fruit platter. This was the best Sao Joao in London with packed crowd at the London Bar Stock Exchange, Market Place, Hounslow, London. The organizer has done a great job which surely gave value for money. The event surely gave me an opportunity to meet my fellow villagers, friends from Dubai and Goan friends in UK,” says Simon.

Leicester-based Alvita Rodrigues was overwhelmed with the nostalgic feeling of celebrating this popular feast of St John the Baptist in UK. “As a Goan living abroad, we feel humbled to attend this festive and colorful traditional event. I thoroughly enjoyed the famous Goan Mandos, dancing to the beats of the brass band, a live band M25. Above all, I enjoyed meeting new people who share our Catholic faith, young Goans from Kenya and many youth from the UK too. As always, Goan food was finger-licking good together with great entertainment and competitions. It’s a wonder why such feasts get celebrated just once a year. My prayer to Sao Joao is for his intercession so that our homes,

fields and country may be blessed abundantly this summer,” says Alvita, originally from Benaulim.

Tome D’Souza from Aldona, who currently resides in London, says, “I thoroughly enjoyed the event along with my wife and my son. Simon had planned the event so well, bringing Goa to the UK. There were varieties of games and competitions like weighing jackfruit, best made kopel to name a few. This sent me and my wife down memory lane when we were growing up as kids in Goa. Simon Varella kept the crowd on their toes with his inimitable style. Way to go Simon Rodrigues,” says Tome.

The band, M25, comprising band members Risma Leitao, Russel D’Costa, Reman Fernandes, Santano D’Mello, Joyeaster Barreto and Manuel Dias entertained the crowd with foot-tapping music for the night. “As a part of the band, we got to witness upbeat dancing by the crowd, which was just like a huge Goan family reunion. The food was delicious, leaving everybody wanting for more,” says Russel D’Costa excitedly.