When in Goa, NRIs are Goans first

The first ever NRI Fest was held in Divar, where people from the village and NRI Goans came together, connecting Goans from across the globe 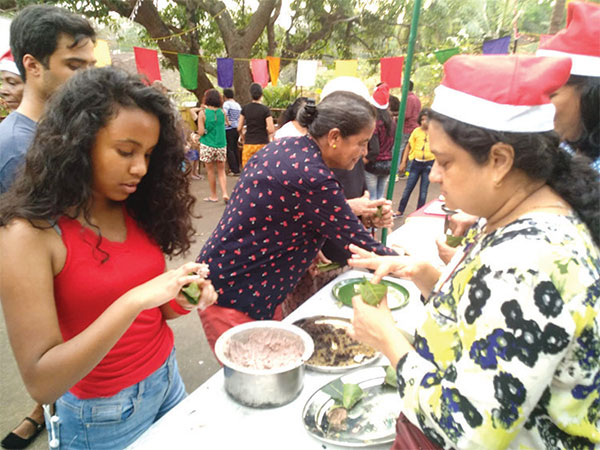 Divar turned out to be a mini Goa on Saturday as Goans from across the state as well as the world made their way into the island for an evening of togetherness. The island was hosting the first ever NRI Fest with loads of activities for the young and the young at heart who wanted to feel at home while coming back to Goa. St Mathias Sports Club, Divar was the place to be as the islanders had everything from Goan food, music and catching up with old Goan memories.
Marius Fernandes, the brainchild behind the fest is back in his village of Divar. “This is the first NRI Fest in Divar connecting Goans across the world. Make in and Made in Divar showcased Zumba, cooking workshops, ghumots, dance, music and films. Many Goans come down to Goa for holidays especially during this festive season. We have taken it to the next step and tried to connect these Goans with other Goans. The fest was open to all Goans who are NRI, NRD or OCI. Many Goans when they reach Goa, the first thing they do is rush to the Mapusa market to buy local ingredients. We had all that here at Divar for the fest,” says Marius.  The NRI fest had performances by students of Sanjay School and National Institute of the Blind. It was a great chance to catch up with the rich cultural heritage of the state and revive the lost arts like making ‘mollam’ by weaving coconut leaves and weaving the perfect rotessao for the wooden chairs. There were also workshops on making delicious Goan sweets, broom making and traditional Goan sweets like Pudde and Alle Belle were also demonstrated in a workshop. An interesting initiative by Sohail Pereira of making sustainable bricks from plastic and reusable glass was also introduced at the fest. The night was entertaining with the film 'Delightful Divar' and a jam session by Divarkars from Goa and abroad. “It’s a very nice concept where the locals interacted with NRIs. Everybody is busy in today’s world and this fest gives an opportunity for Goans especially the oldies who knew one another years ago to mingle together. It was a different village life earlier where people knew each other in the community. This fest was a time to relive those old memories. The festival was open to the whole island including NRIs and even NDR, Non Divar Residents who are residing outside the village, an occasion to come back to their roots. It was a joy to see the young musicians of the village, all below the age of 16 years, perform for the fest. Other musicians from the village jammed later in the evening,” says Ivo Azavedo, President of St Mathias Sports Club, Divar. Greg Fernandes, a Divar resident now settled in Muambi was also in Goa for Christmas and the New Year. He was delighted to be a part of the fest but mainly focusing on the backstage duties. “I support Marius with the behind the scenes requirements. I have been in Konkani programs and Tiatrs in Mumbai and I have worked with the best from the tiatr scene in Mumbai. I am also a member of the Maharashtra Konkani Kala Sanstha and I also received an award from the Tiatr Academy Goa for my contribution in Tiatr. This fest gave me another chance to catch up with old friends in the tiatr and music circle,” says Greg. Besides a good time, Marius wanted NRIs to feel comfortable in their own home state. He understood their problems which were also addressed at the fest. “Being an NRI myself, I knew what it feels to come back to Goa. You don’t know whom to contact for the smallest of chores. Who is the ideal carpenter, plumber, telephone repairer or electrician in the village? Who are members of the Panchayat. These are basic information that are required for any work to be done around the house. I got everyone under one roof and in case they need more information, I am ready to help,” concludes Marius.
Related news