When they all left: Looking back at Goa’s migrant exodus

Circa April-May 2020 A large number of migrant workers were stuck as they lost jobs due to the virus. Many were without food and their plight was addressed by people who organized a system to ensure they received food packets everyday. In Goa too a large number of volunteers stepped up to ensure these migrant workers were helped. A year later many speak of their experiences and how they look back on those days 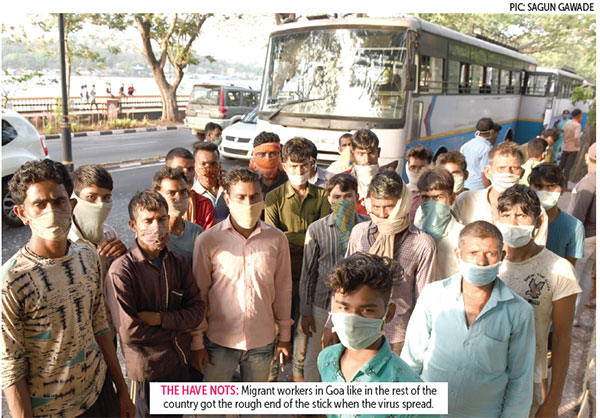 The images were quite stark. Exhaustion writ large on their faces, their eyes resigned to their fate. This was an image captured all over the country as millions of migrant workers were caught unprepared as the country slipped into a brutal lockdown. A lockdown due to a virus that was sweeping the country like it had done around the world too. In Goa the situation was no different. Scores of migrant workers from the construction industry and other small scale industries were left in the lurch, without a job and more importantly without money. They all wanted to return home to their villages but were stuck. Many were young men but there were also families with young children. The system had collapsed and many decided to walk home that was more than seven to eight hundred miles away on an average.  In this time of great suffering an army of volunteers emerged to help these migrant workers get food everyday and even get on the trains. It was an experience that will stay with them for the rest of their lives. For Vijaya Paes of Offbeat Goa the sheer divide between the haves and the have-nots was a massive shock. She said the fact that there was such a huge swathe of the population whose voice could not be heard was an eye opening experience. Vijaya said “The discrepancy between people with options, those with jobs and choices and those without was very startling. My takeaway from all this is that if another crisis occurs, we should be better prepared. There should be better planning.” Ishita Godinho who has been involved in the social developmental sector and was closely involved in the campaign to help the workers get food felt it was important to not take anything for granted. She said, “It is important to be sensitive and this was very important when we were working with daily wage workers and even those who used to work in houses but were let go. It is important to be aware of the people around you and check if you can be of any help to them. I learned labour does not have the knowledge of their rights. This sector needs to be formalized in India”. She said in the year since it all happened many had returned to work on construction sites and fishing trawlers. She felt many were resentful about their treatment but they had to return to earn money for their family. The only solution was to build awareness amongst them about their rights. The prospect of dealing with men very aware of their own dignity and what this situation was doing to them was something Nandita Deosthale was very aware of. She said none of them had any provisions and they were losing their dignity seeking help. She said “They used to work and earn money and buy food but now they were incapable and were accepting handouts. I could feel their hurt. I wish we could have done more”. She said they experienced opposition from locals but the experience of working with such a fabulous team made it worthwhile. They created a structure which could be considered a fine example of teamwork. It was very flat and where everyone took responsibilities. She said “We can look at how things work and how systems can be created and maintained. The world is as real as you make it.” Asked whether people had returned she said she had interacted with a group of 25 and all of them had returned to work in Goa. Promising artist and someone very involved in several community mobilization programs, Sharada Kerkar said interacting with various government departments, understanding the state machinery was a big part of her experience. She said “There were good as well as bad experiences. Our focus was the migrant workers with each looking after 2000 odd people but the government was looking at scale. I learned a lot from it”. She confirmed many of the people who had left had returned because Goa offered a better wage rate. Perhaps Shivangini Tandon's experience as a volunteer will be an eye opener to the government. She said “We heard people were without food and when we went over it was not ten or twenty but people in their hundreds. In terms of learning, it was an amazing group of people who put everything aside and worked with remarkable efficiency to ensure people got food to eat everyday. Eventually we were supplying food to a thousand people.” That was the good part. They started interacting with the government. They tried working with them. They interacted with senior government officials as well as those in the Panchayat. She said “At the end of the day they did not care. There was a complete absence of empathy. As long as all the boxes were ticked they did not care. There were people in the system who worked very passionately with us. But that was few and far in between. The government saw us as mischief makers who were demanding accountability. They had no idea how many migrants were present in the state. That was the sad state of affairs.” A resident of Siolim where a large percentage of migrant workers were from Bihar, she said they had all returned back to jobs. She conceded it was a tiny sample size but it could be said a substantial number had returned to work. It was an experience which was a blot on the national conscience but it was also a time when people with a conscience stepped up to be counted. Ironically it took the crisis and their exodus for people of Goa to realise the importance of migrant workers. All of whom who returned were welcomed back.