FC Goa had a very strange season; it topped the league and qualified for the AFC but then it lost in the semi-finals. The sacking of the successful coach for yet unnamed reasons perhaps gave an indication of what was to come. Now he has taken several star players to Mumbai. FC Goa’s cream will be playing with Mumbai FC shirts this season. Café spoke to fans about who really lost the dressing room, Lobera or the team management 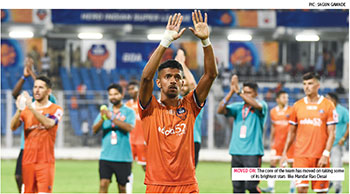 With the likes of Boumous, Fall, Jahouh, and Mandar leaving it's obviously going to be tough but I'm pretty much sure our coach Juan Ferrando & the Fc Goa management is going to recruit talented and promising players. At the start, we didn't know who Sergio Lobera was or his playing style or his players so we just have to trust Juan, give him some time to adapt, and then make comments. Let's ‘Trust the Process’. Our team needs a major rebuild but we have already found replacements with the likes of Redeem Tlang coming in for Jackie and Igor coming in for another foreigner. Our young talented academy players are also being promoted into the first team so let's look forward to next season. Força Goa!!-Kunal Kunkolienkar, Student, Margao

It was very certain and clear right from the time of the sacking Sergio Lobera that this was coming and I think the club should have prepared for it. I think it’s Very difficult be it any industry to adapt to major developments suddenly. As an individual you lose trust, you Lose Confidence and it’s been normal for individuals to follow their managers/coaches for self-development. For the next season the primary focus on is to build all over again and as a fan I don’t have the patience to support them.

The turn of events in FC Goa Club has been no less than of a “TSUNAMI” which has wiped away players deserting the club one after the other. As an ardent FC Goa fan, I strongly feel that the club needs to come out with what prompted them to sack a successful Coach like Lobera. It is absolute nonsense to state he (Sergio) lost the dressing room especially when we have seen that top players like Hugo have parted ways with the club in the most dramatic way on social media recently. I believe FC Goa Management has lost its dressing room. The players which took them to qualify for ACL to play at ASIA will now be missed.  The next year will be a big challenge especially for finding a suitable replacement for Hugo, Fall, and Ahmed Jahou- Kane Barreto, Self Employed Candolim

I am sure the team will stick together even in these rough times and we will be productive. Hope, skills and talent have never fallen short for FC Goa therefore we are certain we will come back stronger. The only thing the team and its supporters need to do have faith and play wisely. Well, it's evident that great battles can be won with smart brains too. I wish FC Goa emerge victorious as always- Deitan Luis, Gaur Army Member, Assolda

FC Goa which until a few months ago were looked upon as India’s first-ever club to qualify for ACL is now unfortunately become a wounded house with all its inmates choosing another club over it. The dramatic sequence of events can be best summed out with their biggest blunder to sack Sergio Lobera. We have seen how players like Hugo Boumas who had their contract till 2022 have parted ways. For next season we hope the New Coach Juan Ferrando builds up a strong team- Shubham Faldessai, Self Employed Quepem

I believe FC Goa will rise up to the occasion as the new Jaffer is very positive about Club Philosophy. As far as next season is concerned, we have to support our players like Brandon Fernandes, Mohammed Nawas, Lenny Rodrigues among many other promising talents who will make a mark for the team- Pooja Kamat , Housewife, Kundaim

FC Goa has been the most entertaining sides of Indian Super League. Sergio Lobera will always be in the hearts of Goans and his contributions for FC Goa will be remembered and shine as Golden Era of the club. We hope that The Tiki-Taka football style Legacy is continued. We expect closed-door matches ahead but we can’t wait to see players like Lenny Rodrigues and Mohammad Nawas adore the national colors in the national Indian team. We are very positive under the leadership of Clifford Miranda and Juan Ferrando -Sidharth Mehta, Self Employed, Navelim

The fresh signings of the Gaurs like Igor, Chote, and Redeem are exciting and we look forward to them creating new records for the team. No doubt we are undergoing a low phase but we believe that management will take steps to reorganize and bring up a strong side for its fans- Vilas Gokul, Fatorda, Gaur Army Member

The new season will be very different for the Gaurs. With many of our star players leaving our Gaur family, it did sadden us and sincerely, made us angry too but we can't help it. All we can do is wish them good luck. On the other hand, we can hope for the best for our own beloved team- Conchita Goes Peoenca, Teacher Calangute

Stars leaving FC Goa, I don't think so!! We still have many star players in the team who need no introduction, be it Brandon, Seriton, Gama, Princeton, Nawaz, Lenny. And with the signing of Igor Angulo and many more to step into the boots of the departing players, I don't think there's anything that can stop FC Goa from conquering the coming season. And when we have such a motivating coach, I feel "Bhivpachi Kaich Garaz na". Vamos Goa- Suraj Subhash, Ponda, Physiotherapy Student
Related news