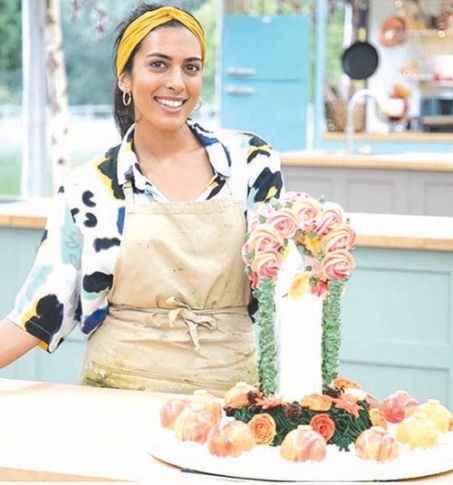 The Great British Bake Off TV (UK) baking competition programme, which has been running for several weeks comes to it’s finals next week Tuesday. Among the finalist is Crystelle Pereira, London born of Kenyan Goan parentage.

The show started with twelve amateurs bakers, age ranging from 19 to 70 years.

Crystelle faced the challenge working under pressure and always keeping her cool, smiling even when things went wrong. At the semi finals last Tuesday, the quartet finalist were tense which was a Patisserie week pushing the candidates to their limit. Crystelle managed to get through the finals and was also awarded the Star Baker for this event. An amazing achievement for someone who had or was concerned about her experience. She applied for this competition last year during lock down on the insistence of her elders sisters, being reluctant having very short experience.An application that proved very rewarding.

Crystelle’s passion for baking started only three years ago, but took a serious turn during the lock down last year. Having learnt to cook much earlier picking skills from her parents who are very good cooks. Her Mum would ask her to taste the food which she had cook, officially qualifying as the family chief taster.

Her Grandma, Nana as she loves to call her also has had influence in her cooking and baking specially with the Goan ingredients. Grandma, or Nana as she calls her has imported common Goan original ingredients, among these is Goan jaggery, Goan vinegar, and other spices. She has experimented with these Goan ingredient to create new flavours. Her style of cooking is a fusion of Indo-Asian, Italian and other European cuisines. Ancestry connections in Goa is Tivim where her Dad has links and Corlim Mum’s side.

During the weeks in the competition candidates have had to demonstrate theirs skills in baking technics, presentation of a signature dish and finally a Show stopper.

Crystelleis quadrolingual having graduated in French and Spanish. She is also fluent in Italian. Cooking and baking are just a hobby as she works as a Client Relationship Manager for a bank. She also loves singing and drama.

On her holiday travels along with her friends, Crystelle is the one who would select the places to eat and dine.

For the finals she will be chasing the trophy along with two others; namely ChigsParmar who took to baking during the lock down and Giuseppe Dell’Anno a chief engineer

Judges Paul Hollywood and Prue Leith have a task this year as standards of baking have been very high.

What is in store for the finals will be a big surprise as Crystelle might come up with a surprise with a dash from the orient.