Ambulances with party flags, jostling over refreshments at a vax camp. How low will Goa politicians stoop?

For starters, there must be a design in making a solemn and serious act of vaccinating people, especially the vulnerable against COVID. Prima facie these so-called ‘utsavs’ wouldn’t have been necessary, if the State had arranged for enough stock of vaccines. Secondly if the Municipal Corporation of Mumbai (BMC) can float a global tender to procure five million vaccines from the global market and a planned vaccine distribution with private hospitals and housing societies is the Goa government bereft of ideas and initiatives to do even that?

But then, there would no chance of bragging rights, or pathetic attempts to score political brownie points. And let’s face this. No party is exempt from this absolute circus of making the act of vaccinating Goans a politically infused exercise. Goans should see through this shallowness.

Firstly, Margao MLA Digambar Kamat, under the heat for not being assertive enough to get his own Chairperson of the MMC, tried to make up ground by writing to the South Goa collector recommending locations for the Tika Utsav. Then upon seeing Government and BJP sponsored banners captioned, “Seva hi Sanghatan Campaign” (service is what our organisation does) congratulating Prime Minister Narendra Modi and BJP Chief JP Nadda at the entrance to the Adarsh School complex, “seva” wasn’t quite the first thing on his mind. According to the BJP, Kamat got the banners removed. But Kamat’s peev was nothing in the light of the almost ugly manner in which BJP leaders, hardly visible when people were gasping and dying for lack of oxygen or hospital beds were there in full force for what seemed like a jab party with both parties wanting to play host. Well, if not service, there was plenty of lip service.

Deputy Chief Minister Manohar Ajgaonkar, who is the MLA from Pernem in the extreme North of Goa, decided to stamp his footprint in his home town Margao from where his local politics (in the Gandhi market) started. He was last seen gyrating gustily at a family wedding with many guests not wearing masks when COVID restrictions were in force. And he didn’t turn up either when Goa’s deaths and cases were going out of hand, to at least be a part of the Chief Minister’s attempted   albeit far too late   moves to get Goa out of the crisis. He along with the BJP city leadership of Margao landed in full strength for what they called the “government-sponsored” tika utsav. 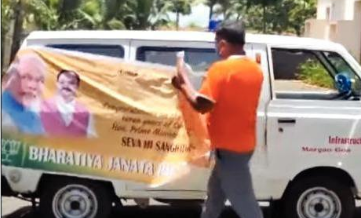 Ladies and gentlemen of the political brigade (Congress included), this isn’t a football match or a village tiatr. But would you know the difference?

An almost bizarre, out of this world surreal drama was witnessed, with a local BJP city person Parag Raikar entering the Daivadnya community hall carrying refreshments, only to be stopped by the MMC Vice-Chairperson Deepali Sawal (Digambar Kamat’s camp) asking him to leave because her leader (Kamat) had already made “refreshing” arrangements. Raikar would have none of it. Jab or no jab, his refreshments, signed and sealed had to be delivered. But how could the Congress, fresh from civic victory allow COVID vaccines injected in Margao, with the vaccinated regaining their energy drinking refreshments provided by the saffron camp?

For the BJP, this was the Prime Minister’s programme and that is all that mattered. A Congress influence in a BJP/Government ‘programme’ was absolute sacrilege.

But there were more surprises in this wonderland. Even the ambulances kept on standby and to ferry those who did not have transport had political stamps. Yes, logos and flags of political parties. And while the police made attempts to calm things down by asking for political banners to be taken off, the parties would have none of it. It doesn’t matter if countless tourists entered Goa without RTPCR tests bringing in the virus. But let anyone dare to even come near a party sponsored ambulance and take their symbol of pride   their party banner off.

The humour or attempts at satire apart, have our elected politicians and their grassroots armies even thought about the optics of such crassness, displayed at Margao. From calling it an “utsav” to the jostling over refreshment ownership to ambulance draped with party flags, has reduced all of them to caricatures. Of course, going by the track record of many, there wasn’t much stature left to be reduced in the first place.

Even if a fraction of this negative energy was spent on the following, Goans would have breathed (pun intended) easy:

u A fresh food supply to COVID patents and their relatives

u Diverting MPLAD funds of three of Goa’s MPs (including the Rajya Sabha MP, who is the BJP state president) to panchayats, equally divided for spends on oxygen, medicines, etc

This is what real “seva” would have been.

Contrast this with the group of Sikhs who have been in GMC for a month feeding almost everyone who comes. Or countless volunteers, restaurant owners and village Samaritans who are raising funds, ferrying the sick, dropping off food packets, supplying oxygen all from donations of large-hearted Goans.

Ordinary Goans truly have no time for “utsavs” or cheap political displays. They have seen enough and lost enough to be taken in by political tomfoolery.