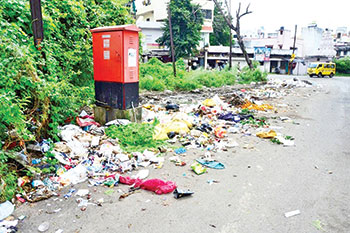 Before Corona we practiced active social distancing with caste and creed! Started to list habits and found that if I list the bad habits of only our VIPs and political (instead of serving) parties, they would fill pages. Corona has exposed most of our bad habits which now have perforce to be confronted and changed since we have to live in a hygienic and safe environment! Regrettably many habits show us as uncivilized. People are full of habits, both good and bad. Some are required and performed on auto like morning abolitions, whilst others like indiscriminately spitting; belching loudly in public after eating or blowing nose openly in the air is not. Habit dies hard and now is the time to list some and see what can be done to eliminate them in public interest! There may be good reasons why some have developed.

A long time back our plane had to stop at Frankfort in Germany for repairs, we were disembarked being served with free beer and sausages in the waiting enclosure. I did not realize I was pushing in a queue of only Indians with disgusted foreigners looking on saying “Do not rush, there is plenty for all”. Those were the days we had grab first habits due to conditions of scarcity in our country and also foreign goods were not freely available in India. Unlike some in our ruling party who blame Nehru and Co for every ill including the migrant issue, there may be good reasons for bad habits we have developed. So no blame game or derogatory imputations intended.

Humans are social beings and with such a large variety of traditions and customs in our country, I am aware that one man’s meat maybe another man’s poison. Manners and etiquette are simply consideration for another person’s feelings and sensitivities. As a nation the Japanese are an example of many good habits. They even bow to greet you, are mindful of government property and defacing any buildings, places or statues. Though they may be conservative, they are not narrow minded as the majority of Indians are although we are the claimants of Kamasutra and considering some cave and temple carvings, our ancestors seemed to be the most broad minded people on earth! Hypocritical moral brigades violently dissuading boys from companionship with girls, Khap Panchayats ordering atrocious unlawful punishments in this day and age are still flourishing. This discrimination which is in fact anti-social keeps Dalits, migrants and people of other status, religion, color, language and so on separated/made fun of or treated unfairly. We generally speak too loudly and stare, more so at foreigners of the opposite sex.

One of our really bad habits is littering. We find people throwing things from moving trains and vehicles, onto the roads and in drains blocking flow, also in rivers and beaches. Swatchh Bharat has not been successful despite much expensive advertisement, propaganda by well known personalities and film stars, not to mention throwing garbage outside the bins, in gardens, fields and open urination/defecation. We criticize political racism and human rights in America but our hearts do not bleed tolerating the polarization going on in our country, the lynching and upper caste discrimination that can tie an OBC boy to a tree and burn him alive for daring to have a friendship with an upper class girl! Another bad habit is indiscipline on the roads, not following rules when no one is watching, honking at traffic red lights and I don’t know whether this is a Goan trait, but the crab mentality is pulling a person down rather than being happy for the success or helping the person rise higher in people’s estimation.

Surely these and other such habits cannot be our culture when even revered book like the Gita prompts us to overcome anger with gentleness, evil with goodness, the miser with generosity and the liar with the truth! Also if  we are propounding Yoga , it is not only Asanas and Pranayam but a way of life which I’m afraid none of the political parties and most boasting doing Yoga, do not follow. Our PM deserves the honor of promoting Yoga in the United Nations and the world, but I wish he propagated and practiced along with it, the philosophy of Patanjali, Vivekananda, Paramhansa Yogananda and other Yogic greats to unify our country by wiping out all the discrimination, communalization and dirty politics that is flourishing in our nation under his watch!

Another trait is the Bhakt (devotee) of some living people! This attitude encourages VIPs and fraudulent God men. Some politicians are revered and behave as if they are some superior beings and are permitted to be a law unto themselves. Cricketers/filmstars are treated like demi Gods. Most of the media has also jumped onto the cult bandwagon. We must stand together to fight three deadly enemies; the Chinese, Pakistan and Covid. Democracy thrives on dialogue, questioning and dissent. Spectator like silence is dangerous and we stand to lose our precious freedom! The PM salutes those who fought for democracy during the Emergency but where is democracy today? There is no respect for the Opposition or any meaningful Parliamentary debate/discussion. The government trait of deriding any criticism of policy or opinion of anyone with strong propaganda labelling it anti national lacking transparency and accountability is bad.

(The author is a retired naval officer, freelance writer resident in Porvorim)