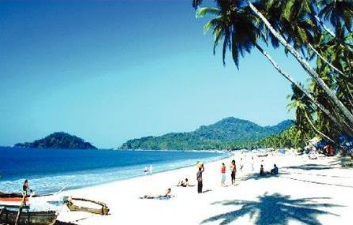 It all starts with the word industry. When tourism is repeatedly either juxtaposed or complimented or becomes a part of the hyphenated phraseology “tourism- industry”, it’s very much like the elephant which is touched and caressed by a congregation of the blind.

Tourism Associations want the policy to incorporate a board like the Singapore Tourism Board, a powerful behemoth which is the last word on tourism. The only aim is to bring in high spending tourists and develop glitzy urban infrastructure to feed that.

Meanwhile, the shack holders are simply pleased that 50% of their licence fees are waived off which somehow has become an end in itself.

On the other hand, the Chief Minister, seems to be speaking from a different plane - or actually planet - when he says the “pandemic curve has flattened” (not ebbed, not controlled but “flattened”) even as the UK, Spain, Russia are either contemplating or have announced restrictions, heading to lockdowns.

Even on the reopening of Goa’s doors to tourism we have heard a Babel of voices “The Tourism Minister had said on April 22 “Tourism has gone to zero. Unless we find medicine for this (COVID-19) how will tourists come?” And now in October, the industry is desperate to close deals with Charter operators and Goa wants MHA to clear them. And where is the vaccine, one may ask?

The ever talking Ports Minister Michael Lobo had in his wisdom grandly opined in April, “The tourism industry will reopen if Corona cases come down in three months. But if they don’t go down to zero in other States, like in Goa, then nothing will re-start”.

Lobo further said, “Domestic airlines cannot be started again yet. You will only end up taking the virus from one state to another”. The airlines started and the minister’s prophecy on the spread of the virus? Well.

These words have come back cruelly to haunt. Cases have surged across India making mortality as obvious as the setting sun and Goa’s cases and death curve is way above the national average. And yet tourism is “open”, as Chief Minister Sawant declared, in a remark filled with pride “80% hotels in the State are full as of now”. Reacting to this, a senior industry stakeholder remarked on Facebook “Don’t know whether to laugh or cry.”

The Tower of Babel was halted by the confusion of tongues. But the tower of confusion in Goa shows no sign of coming down even as tongues and opinions continue to wag. The Tourism policy, for which consultancy fees of massive amounts were paid to “experts” also suffers from this malaise.

It took four years to finalise the tourism master plan and then the draft policy as simply hanging with the government for months on end till it finally got cleared this week.

But what do we have here. Does the policy give direction or is it a document of logistics and admin? The creation of a tourism board is not a policy, it’s an administrative decision. Waiving of 50% licence fees is not a policy, it’s an administrative decision to help shack holders temporarily tide over an economic crisis. The Tourism Minister announcing that “Goa wants to promote drug-free tourism” is not a policy. It’s an admission that Goa has failed miserably to control the menace of drugs, whose trade happens with the complete compliance of the authorities and some tourism stakeholders. And by the way, you don’t promote drug-free tourism. You make law enforcement so strict that the drug trade and consumption is a constitutionally controlled deterrent. That isn’t the case at all.

And there’s this strange naivety that extends even to the Tourism Minister that only tourists do drugs. According to reliable information the maximum amount of drugs in Goa is consumed by those who live here. They may not be Goans, but they surely are people who have a base here. The tourists only add to this pattern.

Read this cute remark of the Tourism Minister on the day the tourism policy was announced “We don’t want tourists who come to Goa and do drugs or those who cook in public places”. Now we don’t quite know if this means street cooking is as serious as an offence as selling or consuming drugs or selling drugs is akin to cooking on the streets, but these throwaway remarks don’t bring clarity.

There can’t be a standalone policy on drug-free tourism. There has to be a policy of a drug-free Goa for which various law enforcement agencies must get together with an aim towards a drug-free environment.

The menace of tourists cooking on the streets too cannot be tackled as a policy. There are laws already existing to enforce compliance. Local governments and the police are equipped to do this.

In the four years in the making for the master plan to be formulated and over a year for the draft plan to be finally approved, the tourism landscape has changed. And COVID has played a significant part. Never before has the need to look at hyper-local tourism, sustainable village tourism, development of art and crafts and culture as critical levers of rural tourism, been so important. The makers of this Tourism policy and their consultants may have taken a break when Corona Virus hit but did little to adapt to the change in the way people would travel in an era when the virus will always be present in some form.

The big vision is missing from the policy document. Thinking big is not always about thinking about big infrastructure. Goa cannot be developed in the Singapore model. Firstly, travelling to Singapore and South Asia and spending a holiday there is cheaper than coming to Goa at times. Their economies of scale allow it and they have the basics of seamless transportation of road, rail and water. And yes they have multiple app-based taxis as well as cabs on the road. So can we get these basics first without looking at the billions of dollars the Singapore Tourism Board has at its disposal. Singapore is a curated destination. Goa is a natural one. Singapore needs infrastructure because it is a man-made city like Dubai. Goa is a natural tropical paradise. The draw of both these destinations is totally different.

So for starters let’s think big by thinking small. And by that we mean develop our villages, our hinterland, with attractions that are local, showcased by the indigenous people of the area. But so much of our tourism is based on getting charter deals and five-star hotel rooms and then as an extension have casinos and game parks and ropeways. Where is Goa in all this?

This vision is not in the policy at all. The official vision of the government, according to the policy, is to make Goa the “most preferred destination around the year for high-spending tourists in 2024."

With all due respect to international level consultants, professionally sound and highly qualified, their narrative is to make the sector more lucrative and bring in revenues. Linked to this are huge opportunities for tourism infrastructure. The new tourism board headed by Tourism Minister is designed to push this narrative. It’s basically about rich tourists coming to Goa, being offered glitzy infrastructure. The irony is that super-rich tourists have seen it all and spend their days in the confines of their suites and villas with private pools with 24-hour room service and activities: for their children. There is very little that enters the Goan economy with even airport transfers arranged by the five-star hotels.

The tourism policy hasn’t underscored this line of thinking or vision. Rich tourists do not make a destination richer by doing six nights in a seven-star resort suite. And high spending tourists are not likely to do embrace hinterland tourism because their vision of tourism is limited to resorts, five-star hotels, fine dining and party places.

What Goa needs is holistic tourism with something in it for all sections: from luxury to affordable luxury to even budget tourists. The entire policy should have focused on these broad areas. In the high footfall coastal belt, tourism should be all about how to enhance the experience for the tourist by making available basic infrastructures like transport, good internet, affordable round the clock restaurants and efficient waste management systems.

Till now do we even have a definite deadline by which all taxis will have digital meters and can be booked through apps? Is there a single line in the policy which guarantees app-based taxi companies will operate in Goa, with local sons of the soil operating them professionally? This elephant in the room is never addressed.

One wishes that the visionaries of this policy had the vision to take Goa beyond coastal Bardez, Salcete and Canacona and a bit of Pernem and showcase Goa’s beauty, culture, costumes, art and music in a manner never shown. It is then that international tourists, (when they do arrive), as well as discerning Indian tourists, will see Goa beyond the obvious.

It is really up to us and our policymakers to change how Goa is perceived, and this tourism policy has done precious little to achieve that.