A new era begins in the United States of America

The Donald Trump era in the White House has ended, and some would say in good time. 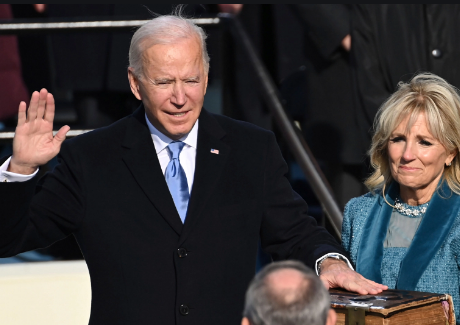 Joe Biden has taken oath of office as the new President of the United States of America, and Kamala Harris as the Vice President with the gaze of the entire world focused on Washington, with the hope that the new era beginning will calm the frayed tempers. A few weeks ago it hadn’t appeared possible that the transition from Trump to Biden would be easy. What transpired in the US capitol in the past few weeks was unprecedented, leading to the Donald Trump presidency ending with him being impeached a second time in the term and this instance for inciting a riot, as his supporters stormed Capitol Hill and even entered the Congress.

Washington DC was sewn tight for the Biden-Harris inauguration with the National Guard out on the streets to thwart any possible attack on the Capitol. This has never happened in the US before, but then no president of the United States of America has caused the administration to take such precautions. Even as he demitted office, Trump did not back down from the claim that the election was rigged. A claim that casts a shadow on the Biden presidency, as there exist conspiracy theorists who support this idea despite the lack of evidence. It also damages the faith of the people in the democratic process, an idea that the US has stood for and defended in the long years of the cold war.

That’s the past, what from now on for Biden and Harris? Trump leaves behind a massive workload for the new president. Biden is perhaps inheriting a nation that has not been as deeply divided as it is now, since the end of the American civil war. Harris, as the first woman, first black and first South Asian vice President has a huge role to play here. The struggle to unite the people again will only be rivaled by the new administration’s fight with the COVID-19 pandemic that has absolutely crippled the nation. The United States has the largest number of COVID-19 cases and the largest number of deaths from the virus. Among the first acts of Biden as president will be signing executive orders to tackle the COVID-19 pandemic and the downturn in the economy.

It does not end there, as Biden is also set to reverse the Trump presidency’s climate change policies, taking US back to the Paris Climate Agreement, from which the outgoing president had withdrawn. At the international level this will be welcomed, as the reality of climate change has percolated in every country. Another move that Biden is set to reverse is cancelling the process to withdraw the US from the World Health Organisation. The new President is also set to rescind travel bans that prohibit travelers from some Muslim majority countries from entering USA. Biden, will possibly be quite busy undoing what Trump did before he can set his mark on the White House and the presidency.

The four years ahead are going to be a long and tough journey for Biden, as though the Democrats control the House of Representatives, in the Senate it is equally balanced with the Republicans and the Democrats having 50 senators each, making Vice President Kamala Harris’ tie-breaker vote all important. Harris, as Vice President is therefore going to play a crucial role in the Senate to ensure that the policies of President Biden are not scuttled when they reach the Senate. After four years during which the US has seen some tumultuous moments, the country appears to be heading to a period of stability, as the old Washington DC hand assumes charge of the country.