Another honest officer bites the dust 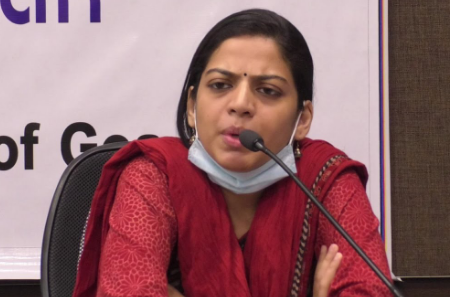 The decision of the Central government to transfer IAS officer Nila Mohanan to Delhi has come as a rude shock to many in Goa, especially since she was of the few bureaucrats who dared to stand up to the demands of the political class. No doubt Mohanan’s transfer could be just a routine one, as she has already served her term in the State, but the timing of the move raises a few questions. Mohanan has been transferred as Deputy Director Personal Training, New Delhi and the central department has asked that she be relieved immediately.

Mohanan has been handling two key portfolios – Health and Education. What is surprising is that the State is currently going through a critical phase considering the COVID-19 pandemic and Mohanan had gelled really well with the doctors and medical experts throughout the crisis. At the same time, her second portfolio Education, too has been badly hit by the pandemic. Considering the above situation one wonders what made the Centre call for her immediate transfer? And what happens to the Health and Education departments now, that are looking for administrative directions? Obviously, whoever and no matter how talented the new officer who takes charge may be, he or she will take time to understand the situation before reacting, and there will be some key decisions to be taken in both departments.

In the early days of the pandemic, Mohanan played a critical role in equipping the ESI COVID hospital besides also overseeing the entire COVID-19 situation in the State. It is an open secret that the officer had differences with some politicians over the management of the pandemic and the purchases on nomination basis. There were times she put down her foot refusing to clear files. One such instance was on appointment for the plasma therapy wherein the Health Minister had to go through Chief Minister to get the appointments and purchases cleared.

Mohanan’s work had drawn praise from former Governor Satya Pal Malik, when he had met the State Chief Minister and Health Minister. “The only good plan to tackle COVID-19 in the State came from the Health Secretary Nila Mohanan,” Malik had said at that time, but since then he too has been transferred. Not only did Mohanan play a critical role during the pandemic, she also has to her credit that she had successfully handled the mining dependents’ morcha. She was the North Goa Collector at that time, who had negotiated with the mining dependents and asked them to back off.

It is a known fact that honest officers do not survive for long at any one place as they essentially represent the inherent insecurity of some individuals, who are uncomfortable with the use of power. This is not confined to government alone but becomes more visible here because of the scale involved and the relative transparency of governmental activity. A government officer, like any other individual, can make honest mistakes in performing his or her duties. This is likely to happen more frequently in the case of enthusiastic officers who wish to deliver results like Mohanan.

One has to agree that despite numerous checks and balances, a bureaucrat is easy prey for political leaders and corrupt officers. But in reality, well-meaning bureaucrats often bear the brunt of a faulty system. Often, their colleagues collaborate with political leaders with the hope of getting plum postings and post-retirement benefits. It should not be surprise that honest officers are often at the receiving end, especially when they go against the whims and fancies of the politicians, who feel politics and running a government is nothing more than running a business.