Choice is between road and rail over trees and forest 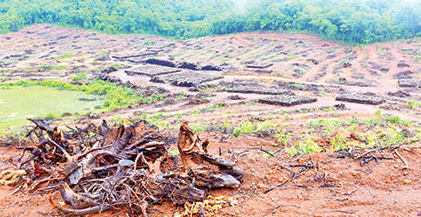 Explaining that the infrastructure projects that are currently on the planning board and that have drawn opposition from civil society have been planned with a vision of 50 year ahead in mind, Chief Minister Dr Pramod Sawant asserted that the three linear projects will see the light of day despite the resistance to them. There were a few more assertions that he made – that coal transportation may reduce to 3 million tonnes and that the government is trying to bring other commodities to MPT; that the improved infrastructure at the port is not only for handling coal but for various tourism activities at the port; that the Tamnar power project is a necessity to supply sufficient power for at least the next five years; that the national highway expansion project will benefit future generations. Does Goa indeed need all these?

Goa could do with a lot of vision and projects that would be planned by determining the needs of the future. Augmenting the infrastructure of road network, railway lines and power supply cannot be ignored. As years pass and the population increases these will be required to meet the future needs. The current opposition to the projects or rail double lanning, highway expansion and power projects is because these are seen as projects that will aid in coal transportation via Goa. The Chief Minister made the attempt to clarify that these projects are not for coal transportation – the quantum of the mineral transported will decrease he said – but for passengers, tourism and other activities. The issue here is whether Goa has the potential to develop so much that it will require a double railway line and expanded highways at the cost of the existing forest.

When there is a 50 year vision, there has to also be a scientific study that will aid decision making so that the plan for the future is built on solid ground. The reason for the opposition to the three linear projects is because the government has been unable to convince the people that these are indeed for their benefit. When it is mentioned that the projects are for passengers, tourism and other activities, are there studies with data to prove that the additional infrastructure is required? Has there been a study on the carrying capacity of the land been undertaken to arrive at the decision on the need for these projects? Because these are infrastructure projects they have been exempt of the Environment Impact Assessment report, and ironically all three are being opposed because of the thousands of trees that are slated to be axed to clear the land for them.

The Chief Minister is adamant that the projects will not be stopped. He said also that the government is concerned about the environment and animals but that human lives are more important and cited the example that on a daily basis one person loses his life at Anmod Ghat. Human lives are important and the balance between protecting lives and protecting the environment has to be found. Speaking specifically of Curchorem, Minister Nilesh Cabral said that there is need of ‘big and important projects of the public interest for the development of the area’. While he may have been focussing on his area, this appears to be the rationale of the government in introducing various projects in the State – that they should be big. Importance should instead be given to projects that are beneficial to all – people and the environment so that all benefit. Future generations will need roads and power just as much as they will require trees and forests. The compromise cannot be made.