If not in Melauli, why not an alternative parcel of land?

A day after President Ram Nath Kovind gave his assent to the three contentious farm acts passed in Parliament the previous week, farmers staged protests across the country, with a token protest in Goa that was led by the opposition Congress. 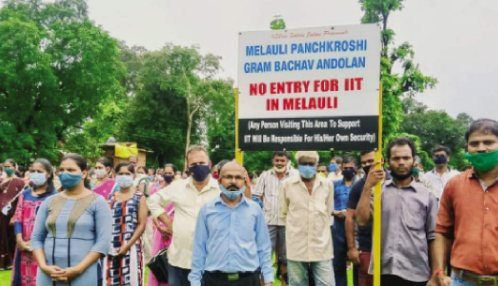 The protest in Goa may not have been as effective as those in the rest of the country, but, while the farmers protested elsewhere, in Goa villagers of Shel Melauli met Chief Minister Dr Pramod Sawant with their grievances about what they claim is their land and that their rights to the land must be transferred to them. They were protesting the IIT in their village.

On the other hand, the government has been insisting that the land that has been earmarked for the IIT belongs to the State, and has agreed to compensate the land losers if they have valid documents. As per the CM’s statement, if the villagers have old orders that lay claim to the land, the process will be fast tracked and they will be given replacement land immediately. That, however, was not acceptable to the villagers, who said that the replacement land would not be feasible as it takes years to cultivate cashew plantations.

The villagers, essentially farmers were protesting for different reasons. They want that the land they are in possession of be transferred to them and that the IIT project be scrapped on this site. They also rejected the proposal of the Chief Minister to have a four-member committee to discuss further with government authorities. The Chief Minister’s explanation that the IIT will bring in opportunities and development for the people, was also rejected by the people, who appeared not in the mood to accept the government’s version of the project.

Here, however, the protests take a different turn, and the issues involved are many and not just ownership of the land. The villagers questioned as to why their fellow residents working in government departments and whose relatives were part of the agitation, have been transferred to distant places. If that’s one question the government has to answer, than there is also that about the environmental damage that the IIT will cause to the area. The CM stated that much of the construction will come up on a plateau and ruled out that the IIT will come up in an eco-sensitive zone. But, a plateau too has its own eco-system that needs to be protected.

The issues go still further as the CM stated that it is political parties who are trying to instigate people, and if they (parties) do not want the IIT they should clearly state that they do not want it. Politics has no place here and has to be kept aside from this issue. The IIT is a prestigious project and cannot be rejected for political reasons. Goa cannot afford to lose an institution of higher education for frivolous reasons. A commitment has been made and the IIT must be given land, but the needs of the people should not be overridden when doing so.

It is the other issues surrounding this project that need to be tackled, but without affecting the future of the IIT in Goa. The government can still consider other parcels of land for the institution, thus saving the Melauli plateau and the plantations. It is not that the government does not have land in its possession that can be suitable for the IIT. Herald reiterates that the land that had been earlier earmarked for the special economic zones (SEZ), and is now in the possession of the government, can be replacement sites for the IIT. Can the government consider this before the agitation at Melauli grows?