In effect, sadbuddhi did not prevail at the yatra

In a democracy, everybody has the right to disagree and protest. 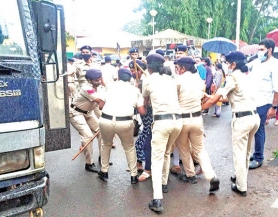 Citizens have the right to gather peacefully without arms. A violent protest has no role to play in a democracy. At the same time, the government also has to protect citizens from violent protests. Democracy cannot survive in the absence of protest, whether the protest is on legislation, policies or plain statement made by the persons in power.

On Sunday, the opposition Congress planned a yatra to the Chief Minister’s residence intending to offer him flowers and ‘enlighten him of his responsibilities’. The Congress aim in meeting the CM was obviously political in nature, and being an opposition party they have every right to protest and highlight issues. The issue that the Congress wanted to raise by the yatra was Chief Minister Dr Pramod Sawant’s statement on the rape case at Benaulim, when referring to which he had raised questions of parental responsibility and on what the teenage girls were doing out on the beach late at night. That contentious statement brought the Chief Minister into the limelight and forcing responses and clarifications a day later.

The yatra would possibly have gone ahead without any untoward incident, but the Bharatiya Janata Party karyakartas had other ideas and turned up at the same spot shouting slogans in support of the Chief Minister, termed the Congress a corrupt party and burnt effigies of Congress leaders. Was it necessary for the party in government to put up such a defence? We have seen this in other States, where the ruling party has thwarted opposition with its own workers countering it, this was a first in Goa. The strength of the Bharatiya Janata Party workers at the site was double that of the Congress workers, and it was the presence of the police force that succeeded in preventing any confrontation between the workers of the two parties. What transpired therefore was a slogan shouting match between the workers of the two parties.

The police force had to be present and managed to keep the workers of the two parties apart, but what transpired in the moments later was surely uncalled for. It was when some Mahila Congress workers managed to break past the police cordon and rush towards the Chief Minister’s residence, that the clothes of one of the women members of the Congress were torn in the scuffle with the police, leading to recriminations from the party and the demand of an unconditional apology from the Chief Minister. The police present at the spot should have acted responsibly and with more maturity. They displayed neither. Will there be an inquiry on the garments of a protestor being torn? The lady in question was carrying a bouquet of flowers to be given to the Chief Minister, was it necessary to manhandle her?

The surest way of avoiding any scuffle would have been allowing a small delegation of the protestors to meet the CM. This is a practice that has been employed in the past. It could easily have been engaged again in this instance. The failure of the authorities in permitting such a move allowed the peaceful protest to deteriorate into a disturbance that was entirely avoidable.

Disagreements between the government, the opposition and the people will always exist. It is the response of the government and the bureaucracy to the protest that is important. In the run-up to the Legislative Assembly elections due early next year we may see a lot more instances of protests and yatras. The authorities would require to use all their experience and maturity to ensure that there are no more scuffles. The yatra was named sadbuddhi (good sense), but ultimately, it appears that sadbuddhi did not prevail at the yatra. We can’t allow that to repeat. There really is need of some good sense to keep the peace.