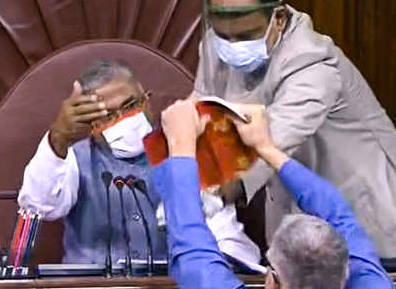 The fight is on and the boxing ring is the Parliament, literally. The Farmers Bill debate did give the opportunity to the entire world to witness that the Deputy Chairman Harivansh Narayan of Rajya Sabha a former journalist was intimidated by a popular Member of Parliament (MP) of Rajya Sabha representing the Trinamul Congress (TMC). Amidst all this pandemonium two bills related to issue of farmers were passed on Sunday.

The two bills - Farmer’s Produce Trade and Commerce (Promotion and Facilitation) Bill, 2020, and the Farmers (Empowerment and Protection) Agreement of Price Assurance and Farm Services Bill, 2020 - were passed by Lok Sabha on Thursday.

The Opposition members in the Rajya Sabha were seen rushing to the Well of the House, attempting to tear up the rule book and break the microphone of the Deputy Chairman. A voice vote was held after a short adjournment. The bills which the government called as “historic”, was tabled amid huge protests by farmers in Punjab and Haryana, who have called it “anti-farmer”. Prime Minister Narendra Modi said passing of the bills was a “watershed moment in history of Indian agriculture”. But why so much of a hurry to deal with controversial bills?

Congress MP from Punjab Partap Singh Bajwa termed the farm bills as “ill-conceived” and “ill-timed” and added that “We will not sign on this death warrant of farmers. Agriculture markets are a state subject. APMC and MSP should not be tinkered with,” he said. Prime Minister Modi later on tweeted saying, “I said it earlier and I say it once again: System of MSP will remain. Government procurement will continue. We are here to serve our farmers. We will do everything possible to support them and ensure a better life for their coming generations.” This statement of Prime Minister Modi and his party, exhibits that their messaging to India particularly the farmers of whom some are agitating, has not been apt enough and is a total failure.

Meanwhile, Congress has targeted the Modi government on the issue of Minimum Support Price (MSP), calling the farmer bills introduced by the government as “black laws”. “Why the government is running away from providing legal obligation for MSP. Who will take a guarantee of MSP outside ‘Mandi’,” were the questions asked by the Congress. The Centre has tried to allay the concerns of the farmers that the MSP will remain intact and slammed the Opposition parties for misleading the farmers for their political gain.

Shiromani Akali Dal (SAD), the oldest constituent in the ruling National Democratic Alliance (NDA) whose party member Harsimrat Kaur Badal resigned from the cabinet last week, was of the view that there cannot  be any talks with the Union government unless the agriculture bills are taken back. This stand was announced by SAD chief Sukhbir Singh Badal.

Mamta Banerjee’s TMC in West Bengal wanted the bill to be sent to a select committee of Rajya Sabha for greater scrutiny. Deputy Chairman Harivansh put their demands for vote and said the motions were rejected by voice vote. There was then slogan-shouting as the Rajya Sabha members who tried to heckle the presiding officer who was protected by House marshals. The Aam Aadmi Party (AAP) also has opposed the farm bill. The party’s Rajya Sabha member Sanjay Singh lashed out at the government alleging that it wants the corporates to take over the agriculture sector of India.

Launching a scathing attack on the Modi government over the issue of the farm bills, Rashtriya Janata Dal (RJD) leader Tejashwi Yadav, son of Lalu Yadav  said on Sunday that his party has always fought for the rights of farmers and will fight “tooth and nail” against this “corporatisation of the agriculture sector”. Why did a Union cabinet minister resign if the bills were not “anti-farmer”, he asked.

The bigger question now is: who benefits with this Farmers’ Bill? The Bills formulate a framework on agreements that enables farmers to engage with agri-business companies, exporters and retailers for services and sale of produce while giving the farmer access to modern technology. They provide benefits for small and marginal farmers with less than five hectares of land. Yet another question is pertinent that whether the income of farmers will increase or will the middle-men be eliminated from this sector, much to the delight of farmers?