Would a tiger reserve protect the forests of Goa?

The movement in Goa opposing the double tracking of the South West Railway (SWR) line has now taken an interesting twist with the Standing Committee of the National Board of Wildlife (NBW) having deferred taking a decision on the proposed doubling of the track from Tinaighat-Castlerock (Karnataka) to Caranzol (Goa), as this segment passes through the Dandeli-Anshi tiger reserve. 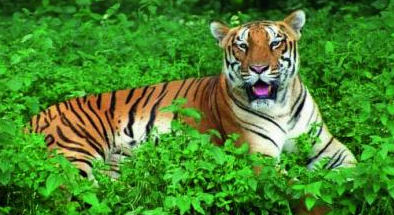 Let’s be clear it has not stopped the project, the committee is of the opinion that this being a tiger reserve, the project must be appraised by the National Tiger Conservation Authority (NTCA). This decision is of extreme importance to Goa, as the Dandeli-Anshi tiger reserve is contiguous to the forests in Goa, where the same double tracking has been proposed.

In Goa, the project for doubling of the track is for the diversion of 138.39 ha of forest land under the Forest (Conservation) Act, 1980. Of this 128.294 ha come under the Bhagwan Mahaveer Wildlife Sanctuary. In the past months since news of this surfaced, there has been sustained opposition to the project, not only because some houses along the route will be affected by it, but mainly because of the thousands of trees that will have to be cut to permit the project. Last Sunday there was a protest meeting to save the Mollem forest, and there have been letters and representations sent to the governments in Goa and at the Centre seeking it protection. But, now we have to ask the question of whether a tiger reserve in Goa have helped the State save it forests.

In 2011, the then Union Environment and Forest Minister had written to the Goa government requesting that the State send a proposal for a tiger reserve in the State, as the Goa forests border the Anshi-Dandeli and Bhimgad tiger reserves in the neighbouring State. Goa has had two elections since then and four chief ministers, but there has been no move made to declare a tiger reserve. For a short while in January this year, when a tigress and her cubs were killed, there had again been some discussion on the subject, but it died down soon. While, a tiger reserve would not only protect the wild cat, we now can appreciate how this may also have been able to save the forests and trees in Goa, that are now under the axe for development projects.

The inordinate delay in protecting the big cat may now prove costly as Goa is also unable to protect its forests and trees. A tiger reserve could therefore have been highly beneficial to the State as besides keeping the tigers safe from predators, it would also preserve the biological and ecological reserve that makes up the tiger habitat, besides getting Central funds that would go towards the maintenance and protection of the forest, amelioration of the habitat and eco-development of the people living in the buffer areas of the reserve. It is not just that the tiger would be saved, but so also the forests and the trees.

Under the circumstances, Goa may have to learn from Karnataka on how to protect its interests. Where the waters of the River Mhadei are concerned Karnataka has also stolen a march over Goa in defending them. Where the forests are concerned Karnataka gets more protection than Goa due to the tiger reserve. Goa’s reluctance to take the proposal for a tiger reserve ahead may turn out to be very expensive for the State in the long run. Along with protecting the people’s interests, the State has to take the steps required to preserve the land, the fauna and the flora, and use whatever methods are required to achieve this.