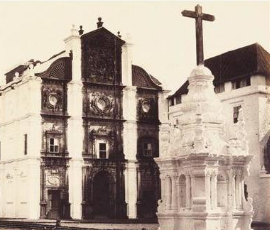 Through the courageous voice of Fr Patrício Fernandes, many in Goa and beyond are now aware of the grave state of disrepair affecting the Basilica of Bom Jesus in Old Goa. It has been demonstrated that part of the cause for this situation is the prolonged effect of heavy rains pouring down on the Basilica’s exterior walls, which were de-plastered in the 1950s, thereby exposing the laterite stones. Although these effects are now dramatically visible to the naked eye, they are not a recent phenomenon. Merely five years after the de-plastering of the walls, technicians were already sounding the alarm as to the damage in store for the Basilica’s structural integrity. For many years following 1961, the issue continued to be debated between members of the Archdiocese of Goa and those trusted with the safeguarding of the Basilica, the Archaeological Survey of India. Nothing was done to tackle the root of the issue, and one might argue that part of the reason for this inaction relates to the public opinion of some who didn’t – or don’t – want to see the Basilica plastered again as it was before 1952, preferring the aesthetics of the exposed laterite. Why the Archdiocese and the ASI were, and are, so heavily influenced by public opinion when the structural integrity of a protected monument and World Heritage Site is at stake is a matter for debate. Why the two institutions still can’t agree on a solution to tackle the issue is a woeful matter of neglect.

Those who oppose the re-plastering of the Basilica’s walls are probably not aware of the context behind the de-plastering of those same walls on the orders of Baltazar da Silva Castro in 1952. His interventions on Old Goa’s heritage were, first and foremost, short-sighted initiatives to “prepare the stage” for the public exposition of St. Francis Xavier’s body happening that same year. This exposition was used and manipulated by the Salazarist regime as a crucial propaganda stunt, intended to sell a pro-Portuguese, Luso-tropicalist image of Goa amidst adverse political pressure. Foreign dignitaries and journalists were invited to Goa for the religious celebrations and other connected events. For them in particular, a scenario was hastily created in Old Goa by Castro and others. The de-plastering of the Basilica, of St Catherine’s chapel, and of the walls adjoining the Arch of the Viceroys were the most visible changes to the national monuments of the erstwhile capital. But undoubtedly Castro would have carried on his de-plastering campaign had he been given the chance. For Baltazar Castro’s Luso-tropicalist vision for Old Goa was to create what he thought to be a picturesque and colourful – joyful? -  backdrop for a religious and imperial exaltation. Traditional lime-plaster was too common, too low-key for his taste. Could he have been inspired by images of the Red Fort in Delhi? Was his vision of a red Old Goa trying to compete with the red sandstones of Fatehpur Sikri? 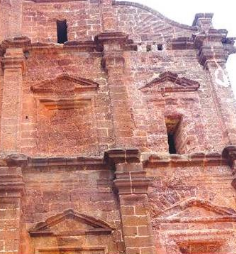 Whatever the influences of his heritage folly, Baltazar Castro had no technical or historical justification for his actions, only immediate aesthetic and ideological motives. It also stemmed from his ignorance in thinking that the same methods he had used in Portugal could be uncritically applied in Goa and to laterite walls.

Naturally, the architectural uniqueness and heritage significance of the Basilica have nothing to do with the laterite stones exposed since 1952. Among many other characteristics, the design of its various exterior and interior elevations, the exquisiteness of the exterior applied ornamentation, and the richness of its diverse interior artistic programmes constitute the heritage elements that form a truly unique building, giving it a World Heritage status.

All of them are in eminent jeopardy because of a myopic aesthetic fad.

(Sidh Losa Mendiratta  has been active in researching and writing on Old Goa’s architectural and archaeological heritage since 2002.)