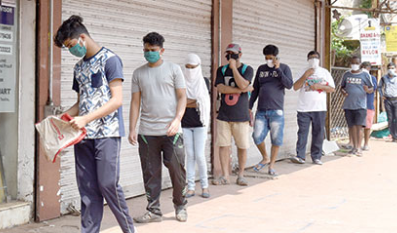 What we are experiencing in the current days are kneejerk reactions of a government that is clueless about how to deal with the situation that the lockdown has brought about. And that is shocking. How is it that a government which was able to restrict COVID-19 cases to 7 in the State from April 3 to May 14 is now desperately attempting to clutch at any possibility to stem the spread in the hope that any one of them will work for it? The numbers of positive cases are surging ahead and it does not appear as if they can be reined in at this point of time. The only consolation for Goa is that there has been no community transmission yet, but this cannot be ruled out in the coming days.

As long as there was no crossborder traffic, or while it remained at the minimal, Goa remained a safe zone, as no persons entered the State and brough the virus along. Of all the COVID-19 cases till date, only one was a local transmission, all the others having being of people who have come from outside Goa. It was but natural to foresee that if the borders were opened and train services would start, there would be no stopping the number of cases. But the State did go ahead with opening the borders, and the result is there for all to see. But there are some other shocking decisions of the government, that makes one wonder whether the State is treading the right path in the COIVD-19 fight.

For now, the Rajdhani Express will not halt in Goa, but the Nizamuddin Express will. Both trains start from New Delhi which has 10,000 COVID-19 cases. This is because the State government has noticed that there is a high number of passengers from the Rajdhani alighting at Margao and testing positive for COVID-19, while there are fewer passengers alighting from the Nizamuddin and none have tested positive. This is the logic by which the government in Goa is running the State. Here is what the Chief Minister, Dr Pramod Sawant, said on Sunday: “Since instances of passengers arriving from Delhi train being tested positive are on the rise, the train will not halt at Margao railway station. However, Nizamuddin Express running between Thiruvananthapuram and Delhi will continue to halt at Margao railway station. We have noticed that few people alight from this train and none have tested positive so far.”

Is Goa waiting to find COVID-19 positive cases from passengers travelling on the Nizamuddin Express to halt that train too? Is that how the government wants to keep Goa safe from the virus? If so, its reasoning is completely flawed. If the State is going to base its decisions on what activities can take place depending on the number of COVID-19 cases that will arise from these activities, then the State is in trouble. In a situation such as this, the governement cannot take the chance of being reactive to what will occur, but has to be entirely proactive to ensure that the spread of the virus is stemmed.

There is another aspect to this inter-State travel. If those coming to Goa are residents of the State who have been stranded in other States because of the lockdown, then the government has to facilitate their return, and take precautions to ensure that they are tested on arrival and quarantined. It cannot, however, allow others to take advantage of the train and bus services come to the State for other reasons. Until such time that the lockdown exists, Goa has to maintain its stand that the borders will be opened only for returning Goans and for essentials, and to allow those from other States stranded in Goa to go back.