When there is no money to repair potholes, how is the govt building a 12-km road for Rs 30 cr through the Mollem forest?

The High Court's order restricting the construction of a road though the pristine and fragile Mollem forests, in the guise of routine repair works has not just embarrassed and brought to light how public departments work with no concern for wildlife and the environment. It has also once again highlighted how the departments that are supposed to be custodians of the forests and wildlife have fundamentally failed to do so.

As always when prima facie violations were found in the construction of a concrete road through the Mollem forests, Goa Foundation wrote to the Chief Wildlife Warden of the Bhagwan Mahavir Wildlife Sanctuary and Mollem National Park to take note of them, asking for his immediate intervention

The letter stated “It appears that there is a proposal for a road to be constructed from Collem to the Dudhsagar waterfalls, as a bulldozer has been seen working in the area. I have the photographs. Both these projects are illegal as they are not permitted in view of Section 29 (1) and 35 (6) of the Wild Life Protection Act, 1972. Please inquire into this matter and take notice of the intention of the Foundation to move the Hon’ble High Court for an inquiry into how such projects have been sanctioned within the wildlife sanctuary and national park – despite numerous orders of the Supreme Court of India.”

While there was no concrete response to this, the High Court intervened in time to restrict the construction. However, the manner in which this road was allowed needs to be studied and reported, tracing from the High court order.

It is clear that the system to protect wildlife is completely skewed and bent towards the destroyer of wildlife and forests and not the protector.

The PWD is undertaking a huge project at a cost of over Rs 30 crores only to promote tourism. There is no approval for this project from the National Board of Wild Life (NBWL) in terms of the said Act. The concrete road will cause “irreversible damage” to the Mollem National Park and to its wildlife. The project is also not a part of the Wildlife Action Plan which outlines all activities within the forest area, which needs to be in accordance with the needs of and protection of wildlife. 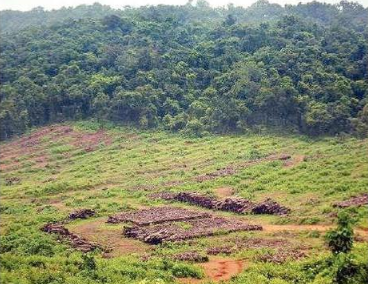 However, the picture officially presented by the PWD is works are basically routine repair and maintenance works and no prejudice will be caused to the environment or wildlife, if the same is undertaken. It stated that it will undertake only the works described as 'first phase' and further, if it is determined that any approval of NBWL is necessary for works in 'second phase' then, such approval will be obtained before proceeding with the works in second phase.

Surprisingly the State Wild Life Board had

The Chief Wild Life Warden submitted that the works have the approval from the State Board for Wild Life on December 2 2019. The CCF said that the recommendations of the Standing Committee of National Board of Wild Life (NBWL) permit such works

Do you call this routine improvement? At the cost of Rs 2.5 cr per km

The Court rejected this and said that are not some routine repair or maintenance works but involves, replacing the katcha road surface with lateritic soiling with murram, providing cross drains, ramps, parking bay, retaining walls, culverts, crash barriers, random rubble masonry. It also includes providing toilet block, guard room, etc. This is all proposed to be undertaken for approximately 12 kms. This means that the project involves an expenditure of Rs 31 crores or thereabouts, covering a stretch of Rs 2.5 crores per km. For an integrated project of this nature, at least prima facie, approval from NBWL is necessary.

Shockingly, this project was pushed through when the State is struggling to pay salaries of employees, is cash-starved and debt-ridden and has no money to even repair potholes. Yet it sanctions a Rs 30 crore project of 12 kilometres by violation specific acts and without taking crucial approvals.

The Goa government and its departments, by their actions, have not just drawn the ire of the court but are also likely to be violative of this landmark Supreme Court Judgment.

In Essar Oil Ltd vs Halar Utkarsh Samiti and ors. (2004) 2 SCC 392, the Hon'ble Supreme Court, has explained that “no person shall destroy, exploit or remove any wild life including forest produce from a sanctuary or destroy or damage or divert the habitat of any wild animal by any act whatsoever or divert, stop, or enhance the flow of water into or outside the sanctuary, except under and in accordance with a permit granted by the Chief Wild Life Warden, and no such permit shall be granted unless the State Government being satisfied in consultation with the Board that such removal of wild life from the sanctuary or the change in the flow of water into or outside the sanctuary is necessary for the improvement and better management of wild life therein, authorises the issue of such permit.”

While tourism or a passage to the Dudhsagar falls may have been one of the reasons for this unauthorised construction, the Goa government has to understand that its decisions regarding wildlife are getting increasingly challenged and ruled against them. The movement against Goa’s destruction is being fought on the streets and the courts. And the government is not winning either this battle or the war.