The people have a responsibility in voting the right people, but can political parties present voters with better choice in candidates? 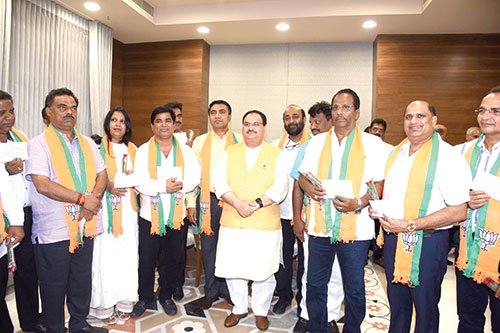 Speaking a week ago at the Goa Legislators’ Day function, Vice President M Venkaiah Naidu made a telling comment that Goa would have done much better had there been political stability in the State over the past years. There would be very few individuals who would disagree with this statement. On the other hand, large numbers would endorse this comment, going on to demand accountability from the elected representative. It is evident to all that the constant changes in government and the scourge of defections that have plagued Goa since it achieved statehood have together conspired to keep the State struggling to rise from the morass it has been pulled down to and achieve the best. Yet, simultaneously, Goa almost annually is awarded as best performing State in the Small States category by national media houses. It appears to be a contradiction of what is occurring in Goa, but what the award indicates is that Goa is performing better than other States. Imagine, therefore, what Goa could have achieved had there been political stability in the State.

Vice President Naidu in his address broached a subject that is extremely relevant and has been often debated in Goa on a day that was reserved for legislators. While it is often said that it is the people who are responsible for the changes in government as it is they who elect the MLAs, it is also clear that it is none other than the legislators who bring about political instability in a State. The people have a responsibility in voting the right people, but can the political parties give them a better choice in candidates? Vice President Naidu in a very pointed statement said that he expects ‘all stakeholders, and in particular the legislators, to deeply reflect on this issue as you have to find answers to the challenges that the State has to overcome if it is to retain its frontline position’. He could not be more correct in saying this but will the elected representatives pay heed to this counsel?

Political instability does not encompass only the act of overthrowing governments, but the changing of party colours that is widespread in the State and the country also brings about a shift in the balance of the government. In the past, and even in this current term, Goa’s tribe of politicians have shown little resolve in staying on with the party on whose ticket they have been elected, but displayed great determination in finding their way to the winning side no matter which party ticket got them elected. Ideology mattered little as they gleefully crossed the floor, never once considering that they were betraying the electorate. The fact that 13 of 40 MLAs have changed parties during the current term, which has about 14 months to go before it is dissolved, is indicative of how irrelevant political ideology and propriety has become to the elected politicians. In such a fluid political situation it is obvious that a government cannot function to its optimum level.

Linking Goa’s development – or economic growth for that matter as development is often construed as infrastructure – with political stability is very relevant, as these are closely interconnected. Political stability in any State will always lead to the creation of a suitable environment for investment and growth, while changes in government will not inspire confidence among investors to place their money in a State where they are unsure of the longevity of the elected government. An investor is always looking to ensure that his investment will be safe and that a change in government will not result in a loss. Which company will risk its investments and projects in a State that is politically unstable? Business is a risk, but it is a calculated risk, and political stability is one of the boxes that any investor will tick when identifying a State for investment. Development and growth depend not just on the trust and confidence of the people in the government, but of the same trust and confidence that potential investors have in the government.

Goa has most definitely faced this problem an ample number of times in the past and the rapid changes in governments were mainly responsible for the lack of growth in the State. For that matter, it actually works both ways – political instability will not attract investment and slow economic growth can in turn lead to a fall in government. It may not have happened in Goa, but there are examples elsewhere. Political parties are aware that economic conditions are a major political plank, and this is one of the reasons why every elected government works hard to create jobs for the people, and when there aren’t enough in the private sector, it merely opens the gates to employment in the public sector, which does not help the economy to grow. The Goa government recently promised 10,000 jobs in government departments, which will be advertised soon. It may bring about political stability, but will this lead to economic growth? That’s definitely a question to ponder, as Goa stands a year away from electing a new government.

It would be reassuring if the positive attributes expected of law makers that Vice President Naidu listed were to be taken seriously by the elected MLAs. The Vice President urged MLAs to develop a strong connect with the people they represent so as to properly assess and understand their difficulties and aspirations; conduct themselves properly in public and inside the legislature; have a character based on moral integrity; have the capacity to understand the emerging complexities and deliver and develop communication skills for effective communication with the people and all stakeholders. Goa certainly needs legislators that would have these above attributes. The tricky part is that these would have to be developed by the elected members, not just at the legislature level, but at every level of governances going right down to the panchayat. It is beneficial that we had the Vice President speak so eloquently to the legislators. It would be a great disadvantage if his advice was not heeded.