TEMPORARY SWEETENING OF THE SUGARCANE FARMERS WILL NOT SUFFICE 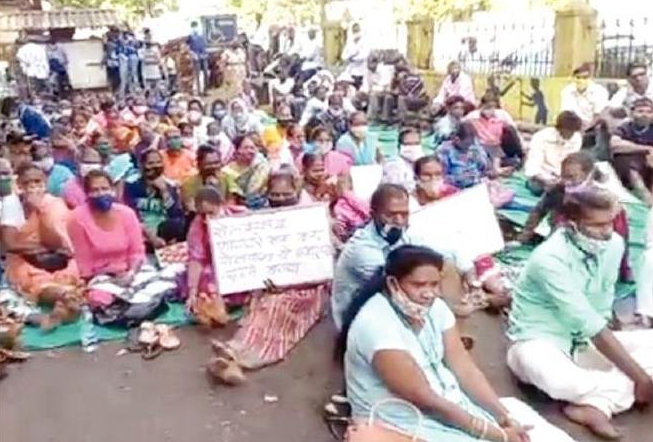 It was a week during which the sugarcane farmers of Sanguem and the farmers of Shel-Melauli protested. There was displeasure in the State’s hinterland, but it had nothing to do with the protests of the farmers in New Delhi. These were different matters totally, unconnected to the Farm Bills, and also not related to each other. It just so happens that those who were agitating in Goa are also those living off the land, and find that their livelihood is suddenly at stake. While the sugarcane farmers’ issue was quickly wrapped up, with the government and the protestors reaching an agreement, in Shel-Melauli where the protests erupted into violence, the tension is still simmering and the issue is very unlikely to come to an end anytime soon.

The Melauli issue has been discussed quite in detail so we look closely at the sugarcane farmers’ issue that has arrived to a conclusion with the government agreeing to the demands of the agriculturists. The demands were payment of compensation of Rs 3600 per tonne for standing crop, payment to be effective latest by end of February and immediate payment of Rs 600 towards harvesting charges of the crop supplied by the farmers to the Laila Factory last year, and calculation of compensation for standing crop based on average of ten years of sugarcane supplied by individual farmer. The last demand was the bone of contention, with the government finally coming to an agreement with the payment of compensation being based on average of eight years of sugarcane supplied to Sanjivani Sugar Factory.

The sugarcane farmers’ issue was simple to solve, and the agitation ended within a few days. All it required was the government agreeing to compensate the farmers for the losses they are suffering due to the fact that they cannot sell their crop to the Sanjivani Sugar Factory. But merely solving the current problems of the sugarcane farmers will not suffice. This is a short-term measure, and the long-term prospects of sugarcane farming have not been taken into account. For this the government has to speed up its plans to restart the Sanjivani Sugar Factory in the State. In September last year, the government had promised that the factory will not be shut down but will be kept open. The progress since then on this assurance has been negligible.

That, therefore, leaves unresolved the Sanjivani Sugar Factory issue that has been hanging fire for far too long. In September last year when it was decided to keep the sugar factory open, the government also decided to transfer it from the Registrar of Cooperative Societies to the Agriculture Department to ensure its smooth functioning. That has been done, but has any further action been taken? It has to be taken forward, or else another sugarcane harvesting season will come, bringing with it the same problems that the government has been wrestling with in the past couple of years. An option that the government is considering is a public private partnership (PPP) to keep the sugar factory open and, more importantly, make it profitable. Now, three months after the cabinet decided to keep the factory open, has there been any progress made on this initiative? Meeting the demands of the sugarcane farmers does not ensure continued profitable harvests for the farmers, unless the sugar factory begins operations again. Quite simply, sugarcane farming in the State is directly related to the Sanjivani Sugar Factory. One cannot exist without the other. That has to be understood and appreciated, and all plans have to include reopening the factory.

Seeking answers to the timing of the reopening of the sugar factory is important, as in the past there have been promises made on the same issue, but they have remained mere assurances. In August 2019, the government, promising a new lease of life to the sugar factory had suggested that farmers increase sugarcane production. A year later, the factory was still not opened, leading to the new decision taken in September last. Yet, it is entirely one matter to keep the sugar factory open and quite another to make it profitable, which the government should aim at, and for which a PPP may perhaps be the best alternative. The working of the loss-making unit has to be restructured from scratch to have it emerge from the losses that it has accumulated over the years and start showing a profit.

That is one of the agitations that was happening during the week that went by. The other was a little more complicated. In the case of what is occurring in Melauli, the government has to realise that the people are not opposing the Indian Institute of Technology. What they are saying is that their agricultural land should not be utilised for this institute. They have been saying this for months, and there is little point in making this an-IIT agitation. It is the location of the institute that is being opposed. The government can still find an alternative site for the IIT. What is stopping the government from scouring the countryside for another parcel of land? An institute such as an IIT is required not just for the State, but for nation building. Goa needs it.

For the smooth development of the State, disagreements have to be avoided at cost, but conflicts of this nature between the people and the government will continue if there is no dialogue between the two. These are two instances of agitations, there are others happening, but let’s not go into those now. An IIT in Goa is a matter of prestige, but by allowing the protests to continue, by allowing it to descend to violence, the government is not sending out the right signal, neither to the people nor to potential entrepreneurs who may be interested in investing in Goa, especially in the education sector. Goa last year enacted the Private Universities Act, which means inviting private parties to set up institutes of higher learning. The State needs to show that it is open to these on the ground, and not merely on paper. These twin issues of the factory and the institute need to be settled at the earliest possible to bring about the development that is needed, but without the polemics that surround them.