THE GRAPH SAYS IT ALL, THE CURVE IS POINTING UPWARD 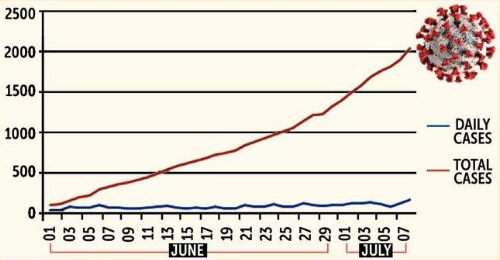 Like a sprightly little child who has been allowed to go out and play in the garden after a long period of convalesence, Goa emerged from its lockdowns a shade happier than when it entered the phase as it was repeatedly told that in was the green zone, and so it strode forward ready to face what it thought would be the post-COVID world. But instead, it was in for a rude shock from which it is still reeling and unable to emerge from. Goa decided to open the gates to that pristine garden where it was gamboling around breathing the clean air, and then through the gate now thrown open entered strangers bringing with them the virus that it had so effectively shut out. Two months ago on May 13, seven rapid tests of travellers came positive, they were quickly isolated, but it wasn’t long before the virus took its own course and in early June, Mangor Hill became the focal point of infections. Since then the numbers have just kept increasing, galloping at a speed that has been unmatched in the State.

It took Goa three months to go from three cases on March 26 to 1,039 on June 26, and then just 12 days to cross the 2,000 mark, which it did on July 8 when the figure of confirmed COVID-19 cases was 2,039. Given the rapid increase in cases over the past few days, the graph, if the numbers are not arrested, will continue spiralling upwards, with no indication of flattening the curve, which to beat this virus is what is required. It, however, can be done. The world has seen how Italy, France, Spain have managed to flatten the curve. There were weeks in the past months when it had appeared that it would be impossible for these countries to return to a normal life anytime soon, but they did it, and how they did it was testing, tracing, isolating and treating. A lockdown helps in breaking the transmission, but without the other precautions, it doesn’t work as effectively. What you need is a combination of all these to slow the spread of the virus.

The national media that had been praising Goa for staying green, now refers to the State as a hotspot for COVID-19. With the numbers increasing, they would not be wrong. Yet, in this battle with the novel coronavirus, there is one thing that Goa is doing better than the rest of the country, which is testing for it. The State tops in terms of the highest COVID-19 tests carried out at 44,129 tests per million as on July 5, which is almost 6.5 times the national average tests of 6,859 per million. These are statistics from the Indian Council of Medical Research (ICMR), so let’s not contest them. Additionally, as per the Directorate of Health Services, Goa has tested over 86,000 samples, which as a number may be less than the other States, but compared against the total population is quite high. This number has been achieved primarily because Goa is testing almost every traveller who enters the State. But the virus is now no longer being only imported, it is being transmitted among the local resident population and herein lies the danger of a fast spread through the State.

Let’s be frank, Goa is also tracing, isolating and treating. Look at the statistics dished out by the Health Services daily, there are tens of persons in isolation, hundreds in covid care centres and thousands of tests being done daily. Where then is Goa going wrong that the cases keep increasing and the spread reaches to different villages across the length and breath of the State? It is here that we need to look at social distancing and how Goa, for that matter India too, did in adhering to this precaution. Lockdowns in European countries were successful because they also strictly maintained the norms of social distancing and wore masks covering their nose and faces when out in public. In contrast, in India the lockdowns led to large numbers of people being confined to small areas for days on end and that expedited the spread of the virus if even one person among them was infected.

Take the case of Mangor Hill, Zuarinagar, Moti Dongor, Chimbel which are all containment zones or certain areas in these places have been designated as micro containment zones because of a large number of cases. These are congested hillsides with narrow lanes, houses built cheek by jowl, some of them with more than half-a-dozen persons living in cramped conditions. When these spaces were declared containment zones due to the rise in numbers, they turned into perfect grounds for the spread of the virus. In the case of Mangor Hill, even a month since the area has been barricaded, the virus is still spreading as cases of COVID-19 were being detected even in the last week. The reason for this is simple. In congested spaces there can be no social distancing and that’s the reason why the virus continues to spread in these areas. This is happening here, and there is little that the State can do about this aspect, but surely it can about the others.

It is becoming extremely clear that the government didn’t expect such a rise in cases and also didn’t use the lockdown time to prepare for a spurt of cases of COVID-19. The hospital that it got ready was for 170 beds with later more beds added, and in the beginning all cases, even those that were asymptomatic were admitted at this hospital. It was later, as cases increased that the COVID care centres were opened and patients displaying no symptoms were shifted to these. Similarly with equipment for treating patients and for plasma therapy. The administration really did believe that it had nothing to fear and allowed the mirage of a green zone to lull it to a state of comfort. Today it is the medical, nursing, paramedical and other hospital staff who are working tirelessly to treat the symptomatic patients and monitor the asymptomatic. Goa, small in area with a manageable population could have been the State that others in the country could emulate during the COVID crisis. Unfortunately it is not.