THE GREEN, GREEN GRASS OF HOME IS SWAYING AGAIN 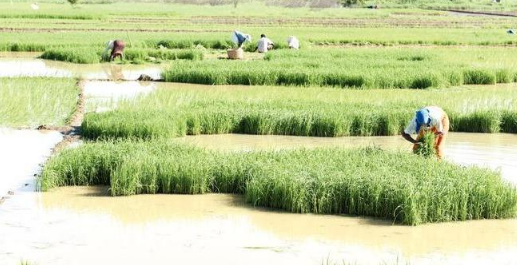 Across the State people are returning to the land that they had for some little time ignored. In a strained economy, where there have been job losses and repatriation of overseas Goans, including a large number of seafarers, the land is what everybody has begin to set their eyes on to pull them through the crisis. Goa’s was once primarily an agricultural economy. At the time of Liberation there were no industries other than some mining firms, the economy stood on agriculture, fishing and remittances from abroad. In the 1980s and into the 1990s Goans discovered that their land holdings on which they grew paddy, coconuts and mangoes were prized assets that they were ‘gold mines’ when converted from agricultural to settlement and commercial and sold to real estate business entrepreneurs. This realisation spurned a whole new industry of developers, builders, contractors and brokers. There was massive competition and a large number of people earned from it. Persons who until then were landholders saw their bank balances fatten even as they lost their status as landlords. Builders, brokers and developers earned and this business became the new sector that began to control the politics in the State. Yet, hundreds of others who joined the rat race in the real estate sector as builders with no experience or even technical knowledge of civil engineering, lost their investments. The scales tilted both ways – creating millionaires and also paupers.

Three decades after that early building boom, the real estate and construction industry in the State still flourishes, and despite the massive downturn in the economy, land prices in Goa have remained steady. This is possibly because the buyers are from outside the State, who want to park their money as investments in the land. Yet, for many a Goan, the same land has today turned valuable for a very different reason.

The COVID pandemic and the resulting lockdown has led to many Goans looking at their land with very different eyes. With job losses across sectors – mining has not restarted, tourism is locked down and construction is awaiting the return of the migrant labourer – there is need to earn a living from a different avenue and there are people returning to the very fields that they had left fallow for years. As the monsoon began to drench the parched earth, the NRI, the seafarer and so many others stepped into the red mud of their fields to plough the soil and plant seedlings. The seeds they are burrowing into the land will not only bring them a harvest in just four months but will also sprout a new employment avenue for them and for others after them, just so long as the people seriously continue working on the fields. On the other hand, months down the line, as other sectors open up and white collar jobs and the lure of the foreign land beckon, if agriculture is again forgotten then it will be a mere passing phase, a momentary 15 minutes of fame for the fields, that may return to be kept fallow again.

While this turns into a new experience for the nouveaux farmers, for scribes like this one, who have often in the past penned reports and articles of paddy fields sprouting concrete structures, writing about the renewed agricultural interest of the Goans is also turning out to be a new and rather fulfilling experience. However, how long will this new interest in agriculture last? Can it turn into a profitable and renewable employment sector? Unless it does, it will not sustain the interest of the Goans.

This is where the State government steps in. The government, especially since the last elections of 2017, has been speaking of focusing on agriculture, and Herald has backed this always. Here lies a golden opportunity for the government that has a better than expected number of people turning to agriculture due to the adverse circumstances. Can the government rise to the occasion and support the new farmer with what he requires to turn his field into a profitable venture? We have heard of doubling farmers’ incomes, of contract farming, of rice intensification system and of mechanised paddy transplantation. These are the focus areas of the State’s Agriculture Department, which has been working towards increasing Goa’s agriculture production by giving a boost to farmers, through scientific methods. There is no time better than the present to put all this into practice and gauge the results at the end of the harvest season. The department can get a report card of its efforts at the end of four months, but first it has to make those efforts. Yes, the agriculture season is already upon us, a month of it is almost over. But the authorities can still step up their efforts to, if not promote the activity, at the very least determine whether agriculture has turned around in Goa.

Amongst the tough challenges that the State government has been facing in its quest – lukewarm at most time – to revive the agriculture sector is the lack of value addition in the profession. This has been attributed as one of the major factors that has held the youth back from taking up farming actively. However, as has been seen now, in times of adversity there is no choice and many have jumped into the fields to earn an income and bounce back from job losses and business closures. The State Agriculture Department has to build from this – construct not buildings in paddy fields, but see to it that the golden paddy sheaves sway in the winds and shimmer under the harvest sun. Goa always turns several shades more beautiful in the late monsoon when its fields grow green. This year, with some more fields brought under agriculture that beauty is set to go up several notches, and all because some people decided that when the chips are down, they should plough the field for their pot of gold. Let’s hope that they discover their fortunes and the government is able to meet the targets it has set for itself in the agriculture field.