Unless Goans are willing to take up the jobs that the migrant workers are doing, there is no way the State can shut the doors to the latter 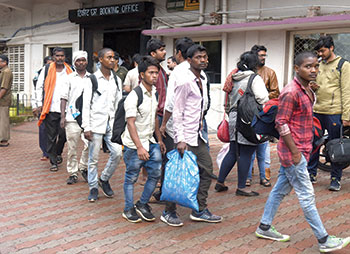 The COVID-19 pandemic keeps throwing up more and different challenges as the weeks go by. Not only has the State been struggling to contain the spread of the virus, it has had to deal with a host of other issues that it had been unprepared for simply because the government could not have foreseen what was going to occur. Tangled with this are other issues that have come up that are turning out to be lessons in learning for the State and even for the people, who have coming to the realisation of how dependent Goa is on the migrant labour force across almost all spheres of activities. It is pertinent to recall what had occurred in July-August last year to appreciate just how the situation has changed.

Last year around this time of the year there had been quite a storm erupting on the social media after pictures and videos had gone viral of trainloads of migrants workers alighting at the Tivim railway station and walking torwards Mapusa. There were questions raised as to who were these people and why they were coming to Goa. The fact that the Patna-Vasco Express had, on two consecutive Mondays, disgorged a number of migrants had then led the State government to seek a report on these mass arrivals. It didn’t take long to get the answer. It turned out that this was not an inexplicable or sudden phenomenon, but that the migrants were coming to Goa in search of jobs on fishing trawlers and in sand extraction. Most had had a couple of months earlier merely returned to their home villages for the annual forced break that the mechanised fishing industry has to take during the monsoon period.

While the explanation may have satisfied some, there were still grumblings about the influx of migrant workers in the State. The episode had reignited the debate on the POGO (Person’s of Goan Origin) bill that a certain orginsation had drafted and wanted introduced in the State Legislative Assembly.

We come to a year later and this time there has been no such mass arrival of migrant workers to the State and the result is that the fishing trawlers, though the fishing season has officially started on August 1, have not been able to draw up anchor and sail out in search of that prized first catch of solar prawns of the season. The boats are there, the owners too are, the weather too is favourable, but there are no workers to man the fishing boats. The situation is currently such that the fish-loving Goans may well have to make do for a few more months with whatever fish is brought to Goa from other States and sold in the local markets, rather than the seafood that is fished out of the waters off the Goan coast. The trawlers owners are unsure as to when they will be able to sail their crafts to the sea, as they don’t know when their workers will return.

There are various reasons for the non-return of the migrant workers. One of course is that due to the COVID-19 pandemic they left sometime in April during and soon after the lockdown as fishing was one of the industries that had been banned during that period. Being aware of the monsoon fishing ban, this turned out to be a longer holiday for them, but four months later the local trawler owners are clueless of when the workers will return. At the same time, though the trawler owners are willing to sail their boats for fishing, there also appears to be a certain reluctance among some of the stakeholders in the fishing industry who fear that even a single COVID-19 positive case could force the closure of an entire jetty, leading to a pause in the fishing activity affecting the livelihood of thousands of fishermen. At the same time, they are now awaiting the standard operating procedure that will allow them to start the business followign the guidelines, but nothing can happen without the migrant workers returning to Goa.

COVID-19 has made Goa’s dependence on the migrant workers increasingly clear. If last year questions were being raised on the arrival of the migrants, 12 months later their non-arrival has brought frowns of worry across industry. By not returning, the migrant workers have brought the mechanised fishing industry almost to a halt. It is not, however, just the fishing industry that depends on them, but the construction and even the tourism industry that relies on their services. Mining is already halted, so we won’t dwell on that, but it is an incontrovertible fact Goa’s major industries are now facing tough times getting back on track mainly due to the absence of the migrant workforce that they so depend on. It is also a fact that as long as there exists the possibility of employment the migrants will come, and with many Goans seeking whitecollar jobs and unwilling to take up other tasks, there are many openings in various sectors for the thousands of migrant workers who come to Goa every year.

However, why not look at this as an opportunity. If the migrant workers are not going to return anytime soon, what stops the local Goan from plunging and doing the work these others would do? A large number of Goans – seafarers among them – have returned to Goa, with the prospects of employment abroad not very bright. Not only will they get employment, but it will also bolster economic activity that has been severely affected since the lockdown of March this year. The wheels of the economy must keep turning, and one more industry cannot remain shut in Goa at this juncture when the State’s finances are already reeling, and unemployment steadily rising.

The unlikelyhood of mining and tourism starting has already severely dented the economy, adding the fishing industry to this list further unbalances the entire economic system that is under severe pressure. Goans will actually have to start fishing not just to get the sea food on their dinner tables, but to keep the economy turning. The reliance on the migrants may well have to be lessened. But there is also a lesson to those who had been questioning the arrival of the migrants. Unless Goans are willing to take up the jobs that the migrant workers are doing, there is no way the State can shut the doors to the latter.