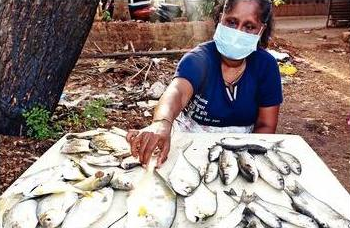 Seems so silly to discuss fish in these trying times, but these are exactly the times surgical strikes on fish supplies are being planned, for that matter every other food supply chain disruptions are either being conducted, or are in the works. No better time really, while the entire population is in a lockdown mode and demonstrations are hard to come by, this really becomes an opportune times for politicians in office to prepare the groundwork to take control of all things food. After all food can then be used as a weapon to control citizens and convert them into slaves from followers. Eventually the goal is, if one applies some imagination, is to take control of the food source and force citizens to be completely dependent on those that have access to it.

The giving away of the Benaulim fishing infrastructure project by the government to a private party is one such attempt to corner the fish supply which will not only be hoarded but released in a calibrated manner so as to jack up the prices and hit the Goans where it hurts the most. However, before this crooked plan comes into full implementation, they need to put in place the local fishermen (ramponkars) by taking over their workplace and eventually put him out of business, hence the Benaulim type of agreement for sale. Fishing infrastructure handing over is just one example of how a Goan eventually will be at the mercy of the people that control the fish supplies, once they elbow out the local fishermen out of business.

Fortunately for Goa the local fishermen are the last and only line of defense and because they are still holding the fort, they have become a thorn in the flesh of those that want to have complete control of the fish supply. The local fishermen might not be educated but they have brought back market forces into play. For example as soon as the lockdown was announced the local fishermen were able to serve the people of many coastal villages with unadulterated fresh fish not necessarily at a reasonable price to begin with, but as soon the supply began to increase the prices began to recede. A natural demand supply dynamics, which does not augur well to those who want to tinker with the supply and artificially keep the prices inflated. So far these fishermen have stayed true to Goans, but for how long is a matter of time, as some have begun to get joining offers from political parties that are waiting to manipulate them and take control of the fish supplies.

During the beginning of the lockdown many jobs local or international got chocked, but Goans seems to have shrugged of the tag they carried for long that they are not willing to take up small jobs, converted that belief into ‘there’s is no job too small’ attitude. Many Goan stories did come out that they were prepared to take up jobs that will bring food on the table, this included distributing fish door to door, while many Goan consumers responded in a positive way, there were some who had their doubts especially when the suppliers were unable to explain the origin of the fish. Why are Goans so bothered about the origin of the fish, the simple reason being that fish is not a trustworthy source of food anymore? There are doubts in the minds of the people that fish imported from other states is being sold as Goan fish and in some cases it is mixed with Goan fish to give some sort of authenticity to the goods. No wonder smart Goans pick up their fish supplies directly from the fishermen at the beach.

This brings us to the question, why do we even have to import fish from other states. Agreed we have tourists to feed, but why should Goans give up their right on the source of food that rightfully belongs to them for the sake of tourism. Imagine you tell a Swiss national that he will have to eat his share of cheese imported from some faraway country because it is cheap and lousy, while we hoard the finest Swiss cheese to feed the big spending tourists. This type of arrangement will not only rile up the citizens of Switzerland but they will make sure the government is out of office in no time.

Actually nobody tells you directly not to consume Goan fish, but these crooks have found a way to confuse the people by mixing it all up and take advantage of the lack of knowledge many Goans have in identifying quality fish. Most Goans in the past went by the word the seller would give them, not anymore, and it is here that a dedicated government food administration will have to come in play, not only to check the quality of the food being sold in the market, but to also display the origin of the food.

The developed world has to deal with well informed customer and therefore there is pressure on the food suppliers to give out all information in a transparent manner. This is the reason you have restaurants encouraging the ‘farm to fork concept’ wherein the restaurants or the hotels buy the produce directly from the local farmers thereby ensuring freshness. There are many restaurants that follow this concept in Goa, but time has come to show it off on the menu cards too. That will differentiate your business establishment and could be a game changer; after all educating the customer can never go in vain. Even agencies that give away food awards will become more credible if they go beyond taste and ambience and give significant importance to use of local produce.

Fish is just one example this writer used to explain the importance of self sufficiency in food Goa needs to focus on. We cannot negotiate with our neighboring states over different issues because most of the time our backs are to the wall as we depend on them for food supplies. Fish is one of the source we have abundant supply, at least enough for resident Goans. Let us not allow artificial scarcity to control and manipulate the prices. If market forces are being manipulated it is time for the people to demand that the government bans exports of fish and fix a MSP to be sold exclusively to Goans. Please read MSP here as Maximum Selling Price for the sake of the quiet helpless Goan consumer.

(The author is a business