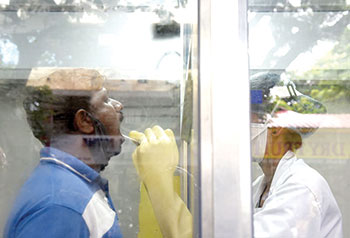 He decided to plunge himself and lead the charge of the COVID brigade in Goa, much like the Light Cavalry Brigade in the Battle of Balaclava in the Crimean War, which spurred Alfred Lord Tennyson to write his seminal poem 'Charge of the Light Brigade’.

The story of Dr Edwin Gomes, or at least the heroism of his act has shades of that  Battle of  Balaclava. The legendry Times, published an article about the battle in 1854 and wrote "The British soldier will do his duty, even to certain death, and is not paralyzed by the feeling that he is the victim of some hideous blunder". Tennyson, in his poem, used the word blunder "Some one had blunder'd"

Half a league onward,

All in the valley of Death

Not though the soldier knew

The decision to form the hospital and put together a team could have been the best one could do in that situation, but let it not be forgotten, that even putting together a team in a hurry and telling them “go figure” was a decision not borne out by forward planning. And let it also not be forgotten the acute pressure that this team had to face, with patients and deaths rising was also collateral damage of not keeping a watch on the influx from neighbouring states and monitoring potential zones like Mangor Hill, Moti Dongor and Chimbel.

But the team of doctors fought like the British Soldiers in that battle against a Russian cavalry unit. They just went in. Here are lines worth recalling

Theirs not to make reply,

Theirs not to reason why,

Theirs but to do and die.

The spirit of the poem and the battle is important to be infused with the present. The doctors of Goa were doing their duty just as the soldiers of Britain were. And they did it well. Even as they lost patients they stood tall and worked, worked and worked. 100 days and counting. And Goa prays that all remain healthy.

But the question here is that should there be any room for acrimony between the Doctor in charge of his brigade fighting the battle of Goa in the COVID war, and the Government of Goa, the “ruler” in war parlance? Should a plea of the Commander for a four-month break so that fresh forces can take over be rejected?

The jury is out whether Dr Edwin Gomes, one of Goa’s finest sons and doctors was handpicked because he was the best man for the job or was he nudged into leading this battle when there were no brave-hearts putting their hands up for a mission which could go either way.

When he was asked to form an army and take charge of treating COVID patients and literally transform the ESI hospital into a COVID hospital, all he had was his medical instincts, gut feeling, experience and a young indefatigable team. In the beginning, they did have time to read, research and draw from treatments being done in India and elsewhere, but to all the first lucky seven patients who recovered completely, there was an X factor which worked. And went beyond books of science. Warmth, smiles and laughter worked, Of course from June onward the onslaught of cases and the spectre of deaths, threw up challenges daily and yet we know for sure that at the COVID hospital, each patient was a name, a soul, was a father, mother husband, wife, sister. They weren’t numbers. Insiders speak of Dr Edwin breaking down at times when he lost a patient. The team derived strengths from patients too. For instance when the son of one man who lost his battle said he would light the funeral pyre of his father to give confidence to other patients relatives to perform last rites according to their customs. Or when the son of the sweeper of the hospital who got cured of COVID decided to donate his plasma (yes when those cured from other strata of society have been reluctant) and work in the hospital to help COVID patients.

Dr Edwin now under quarantine trying to cure himself as it were, from COVID asked for four months leave. The Health department was willing to consider just one. “After a discussion with health secretary (Nila Mohanan), we decided that Dr Gomes will stay posted at the Covid hospital till the crisis ends in its entirety,” said Health Minister Vishwajit Rane. Gomes, in a letter to the government, said that he and his team of doctors at the COVID hospital should be relieved this month.  (From Herald’s news report on the subject).

Dejected at this response his wife approached the High Court which in the fitness of things has asked the two parties to meet (over video conference) and sort this issue out.

While it is strictly not in the domain of column writers to suggest what administrative decisions department should take in matters of leave, it is fair to submit that the issue of Dr Edwin’s leave underscores larger issues including a post-mortem  of the holistic COVID management process of the government.

The need to have a one doctor heading the COVID hospital till the “crisis ends in its entirety”, is bordering on the absurd and the callous.

While Dr Edwin’s leadership has been stellar, not granting leave of absence to a man who has worked 100 days without a break can be a sign that Goa does not have good enough replacements to take this charge or few are willing to. It could also point to an acute shortage of doctors, which itself is both surprising and shocking. Rs 21,000 crores of grants for departments has just been passed without any discussion in the one day Assembly session. Shouldn’t time have been taken to ensure that there should be no gaps in the states health infrastructure?

Secondly, if early tightening was done, more tests conducted at an early stage, tests at the borders made more stringent (we saw people literally strolling into Goa), it is fair to say that fewer patients would have found their way to the COVID hospital in Margao putting less strain on Dr Edwin and his team. By insisting that one doctor be in charge of the state, in trying circumstances like this is not a sign of good health management.

Of course, whether Dr Edwin’s wife should have gone to court rather than sort it out internally is a debate which perhaps has its place. But irrespective of which side of this debate you are on, this is not bigger than that issue of a colossal failure of the state to set up systems and manpower to tackle this crisis.

The infrastructure is either creaking at its seams or has collapsed. How do you explain a 6000-plus backlog in tests by the simple explanation that there was a flood of people who showed up for testing when people in the area tested positive. No one has asked why was this flood accepted? Wasn’t there a protocol for testing and who could be tested and if there was, then why wasn’t it followed?

And perhaps the biggest failure has been not to take COVID care to health centres and villages. They are not equipped with beds ventilators and testing kits yet. Rather than have containments zones, it is more prudent to decentralise COVID management at the PHC and Urban Health Centres making each a mini COVID care centre or hospital.

We wonder if there have been serious efforts to involve the Indian Medical Association Goa Chapter to be the bridge between the private and government sector and deploy the private sector medical force into COVID care. This process, even if it has happened hasn’t shown results on the ground.

We have our medical soldiers all right. They have gone to battle and do not shy away from more. But let them not go in blindfolded not knowing if there will be light at the end of the tunnel.