Govt plans: sure recipe for disaster! 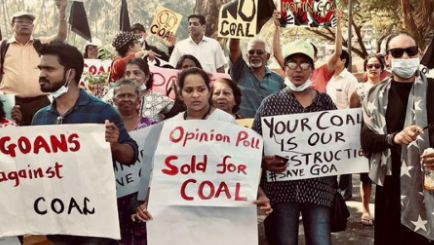 Everybody may want to go to heaven, but nobody wants to die until they have lived their quota of life. And to live, we know of no other place besides our Earth that sustains life. If mother Nature turns hostile due to our destructive activities (all in the name of development), we have nowhere else to run to with our money and wealth. More importantly, we all have a sacred duty to return the planet in good shape to its rightful owners-the incoming generations!An octogenarian fisherman sitting on the Velsao beach promenade recalled with nostalgia, even as the monsoon waves relentlessly lashed the structure, “In my younger days there were coconut trees all over in front here... and the sea even during the monsoon storms stayed far behind”. Today the beach promenade, rebuilt last year after the old one got washed away, is so badly battered by the monsoon sea that only the RCC portion of the structure has survived. The scene is more or less the same all along the coastline...Most of the High Tide Line markers are swallowed by the sea and more and more of the sand dunes are disappearing every year.Global warming is no longer a theory discussed in science magazines; its effects are out in the open for everyone to see. The beach erosion that has happened in recent years is not the normal monsoon erosion that gets filled out later during the year. This is something permanent; a red flag indicator that the sea is indeed moving up, perhaps at a pace faster than predicted by scientists. But instead of harmonising  with nature,  govt policies reflect intentions of warming up to the various business lobbies to open up more land along the coast for development – a sure recipe for disaster!For most of the past 12,000 years, the Earth’s climate was relatively stable and the biosphere was resilient and healthy. More recently, after the industrial Revolution, we have moved into a less predictable era of human-induced environment change. The term “development” has become a much abused word in the present world obsessed with profiteering. How can we pollute our air, poison the waters, destroy everything that nurtures us, leading to a situation that ultimately threatens our very existence and call it development?Amongst all the fossil fuels responsible for releasing green house gases in the atmosphere to effect global warming, coal is by far the dirtiest. Coal is the main cause of sulfuric and nitric acid rain. Its very nature is such that it  fouls up the atmosphere  not only of the place where it is mined but all the  places along the way to its various destinations  through horrendous coal dust pollution, even before it is burned.Goa is a natural Tourist Destination, a sunny paradise that got itself promoted to the world tourism map through its scenic beauty, pleasant tropical climate, clean environment, unique fusion culture and warm friendly people. Similarly, we are also blessed with one of the best natural harbour in the world. It would have been most logical to capitalize on these twin blessings and promote Mormugao Port as an international Cruise terminal. Strangely, for reasons best known to the powers that be, MPT, the central Govt agency managing the port has  left  every potential revenue generating option aside to concentrate on coal and keep their shop running.The State government, apparently under tremendous pressure from the Big daddies , speaks about capping the coal cargo to the present level. But capping is not a answer: MPT should completely phase out coal imports in a time bound manner and make better use of the Port.To put things in proper perspective, nobody does any charity to Goa on the power front. The State purchases most of the power from the National Thermal Power Corporation as per the allocation made by the central government. The Govt of Goa pays the due wheeling charges to Maharashtra & Karnataka for using their network for transmission. Having said this, it may also be added that Goa, a tiny State, must build up on its solar power capacity and show the way forward to the rest of the country.