Green Revolution in India: From hunger, Nation can now export tonnes of food 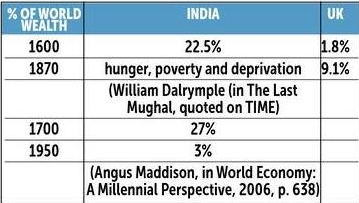 In 1943, with Churchill Prime Minister of the UK, part of India's crops were diverted to feed Allied forces in Europe. Despite the necessary stock of food in West Bengal and the insistent alarms of the local British Commissioners to distribute food to the starving population, Churchill wrote on the back of telegram paper received: "Is Gandhi dead"? And he was adamant not to give food to the dying local population, because it could miss to the fatted English soldiers.

As a result, between 1 and 4 million died in West Bengal from starvation and epidemics, that year. And many will have suffered the sequels throughout life, especially children.

At the time of independence, famine and malnutrition were raging in India, affecting almost the entire population. Life expectancy was 32.5 years.

Some people may think that India was always poor, as we have seen it on our lifetime, and so there was nothing to do. The truth however, is different. British economists, William Dalrymple and Angus Maddison  refer that in 1600 and 1700 India continued to be the richest country in the world. Hence, perhaps, the rush of the colonisers to arrive, dominate and take as much as possible. See these figures:

Dalrymple says that from 22.5% of world wealth of India in 1600, it was reduced to “hunger poverty and deprivation” in 1870, under the East India Co and the British Crown.

The East India Company (founded in 1600), the commercial and armed arm of the British Crown, was dedicated to taking the wealth to the UK. The railways and irrigation canals they installed were mainly to produce and transport cotton to the UK and then bring back manufactured textiles to sell in India, suffocating and destroying the local Indian industry.

Food shortages continued after independence. However, in the new democratic country, the hunger spots were news in the press and the authorities took measures, importing, if necessary, the millions of tonnes needed to feed everyone.

The worst year was 1969, when Indira Gandhi had to import 9 million tonnes (MT) of food grains. Unable to feed its population, Indira took drastic measures to accelerate the “green revolution”.

What is the Green Revolution?

The concept came from Mexico, through the North American agronomist Norman Borlaug, who won the Nobel Peace Prize in 1970. In India, M S Swaminathan led the process to improve agricultural productivity based on agronomic research and technology..

Borlaug dedicated his life to studying how to increase the production of wheat and rice, through the selection of the most productive varieties and, at the same time, resistant to excesses of heat and water. He drew up a plan for cultivation, fertilisation, pesticide treatment, irrigation, always experimenting, improving and identifying the most promising varieties and methods.

At the end of the WW II many countries had the problem of food shortage. In particular India, due to the remarkable negligence of the coloniser, which led the population to starvation, undernourishment or deprivation.

From the mid-1950s to the 1970s, the green revolution first asserted itself in irrigated areas, with a size of ownership that allowed investments in selected seeds, fertilisers, pesticides, etc. The area cultivated with high-yielding seeds grew from 1.68 million hectares in 1966-67 to 78.4 million hectares in 1998-99. Production went growing, alleviating the frequent famines; after 1970 there was no longer need for substantive imports.

When in excess, they degrade soils and eliminate a wide variety of insects, unbalancing the ecosystem and reducing agricultural production due to insufficient pollination. In any case, the increase in cereal production was remarkable, as shown in this table:

Of these three most important cereals, production increased more than 5 times, from 1960 to 2021, much more than the demographic growth. Today, with total production of all cereals of 308 MT, India can feed its entire population maintain a security stock and export, without problems, more than 20 MT per year.

Each stage of the green revolution involves some research: using selected seeds, expanding the crop and repeating the cycle of improvement, both in seeds and in the process of plantation, use of fertilisers, etc.

With the intense or almost exclusive cultivation of one variety, biodiversity reduces. We will see its consequences in the long term, but it seems that biodiversity is, in itself, a value to preserve.

As result of sustained actions in search of self-sufficiency, India is today: the first world producer of pulses, bananas, mangoes and jute. It ranks 2nd in rice, wheat, sugar cane, peanuts, lentils and cotton production. It is one of the biggest spice produce and the number one milk producer (since 1997).

Despite all the improvements registered, the productivity of the land in cereals is in India about half of the developed countries, maybe in order not to deplete soils by exaggerating in the use of fertilisers, or maybe for lack of money. That means India can still make a leap in food production if necessary.

(The author is Professor at AESE-Business School (Portugal).