How pandemic is manipulated to bring in environment misery 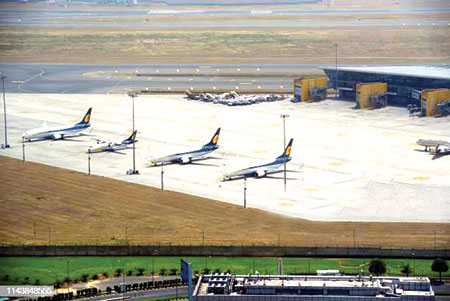 The Covid-19 lockdown brought economic misery, but it facilitated the restoration of the quality of the environment. The pollution levels plummeted all over. Delhites got to see a blue sky. The Himalayas   became visible to the naked eye from Delhi. The din and cacophony dipped in every city. Here in Goa we heard the birds chirping. As we got clean air, our lungs also got clear. Earlier the world was worried about degradation of environment and consequent pollution. Our poor ranking in the Environment performance Index had been a measure of our failure to address challenges. Our standing at 168 of the 180 countries assessed showed us our place!

We thought the pandemic has provided the way forward and provided lessons for the future.  It was believed that after the lockdown is lifted, the economic system would again kick-start with an alignment of growth with better environment.

But do we get what we deserve? Ricardo Salles the Brazilian environment minister was recorded in April as saying Government should take advantage of Coronavirus pandemic to relax environmental regulations. He is also accused of administrative dishonesty and the Brazilian prosecutors have called for his dismissal for his contribution to deforestation and fires in Amazon. Is this possible here?

The environment ministry has exploited the travel and social distancing norms to shift to online platforms and video-conferencing for decision making on environmental clearances which is totally inadequate. This has been a matter of serious concern for conservation scientists, environmentalists and wildlife experts who view the online-meetings to clear these projects to be farcical. The draft environment impact assessment notification 2020 which included controversial provisions to legalise environment violations. The draft excluding many ecologically significant areas that are protected under Forests Act 1927 and wetlands conservation and management rules 2017 and other fragile and wildlife habitats were  uploaded on the environment ministry’s website on March 23rd   a day after so-called ‘Janata Curfew’ and the lockdown that followed. The ministry received over 5000 objections by email within a month. A case for withdrawal was made out. The Union environment Minister overruled his own department officials and cut short time for public consultation. That the Delhi High Court intervened to extend time is a different matter altogether! The country’s real estate lobby wanted an exemption from the obligation to follow the CER guidelines.

An internal committee led by Dr. Satish Wate  rejected the demand twice but during lockdown time the same committee brought the law and the minister  approved the industry demand. PM himself launched auction of 41 coal mines several of which are located in forest rich areas of MP, Jharkhand, Maharashtra and Chhattisgarh signalling the government approach. Mineral resources deserve utilization for development and auctions  of course generate huge funds but the social costs in terms of  human displacement, disturbing of wildlife, contaminating and drying up  of water sources affecting  health and destruction of ecosystems

It is still extraordinary times. The virus has disrupted all aspects of our lives. We are told to stay at home. Travel and transport lines closed and air travel suspended. Shops and establishments including offices and courts were shut. Even Xerox places were closed. Our lives are upended. The world did not get such difficult times at least for a century. The environment ministry fast-tracked clearances amidst a total shutdown. Who thought that difficult times would be misused to ram the projects in this manner?

“I thought this pandemic will teach us a lesson that playing with nature can result in catastrophic consequences to humankind but sadly the MoEF&CC has used this lockdown opportunity to bulldoze major forest and environmental clearances,” said Dr Rahmani, former Director of the Bombay Natural History Society.

How can Goa and its Town and Country Planning department be far behind? The state government notified a total of 112 proposals for conversion of agricultural, orchard, forest-type and ecologically sensitive land for settlement. The notorious and arbitrary Section 16B of the TCP Act, brought in by the previous TCP Minister is yet to pass the High Court test. Same provision is now pressed by the present TCP minister. Four lakhs  sqm. of  orchard, about 49000 sqm. of land classified as natural cover, 26000 sqm. of paddy  and 81,000 sqm of partly orchard and partly paddy - large tract of it being steeply sloppy with green areas are to be converted. The government is set to destroy whatever that is left of this tiny state. The soul of Goa is being put on sale. It is our misery that trying times are permitted to be exploited and we taking it lying down. The  Brazilian environment minister was at least very honest by our standards!

The writer is a practicing lawyer, senior faculty in law and political analyst)