IPCC 2021 and biodiversity: Where have urban gardens gone? 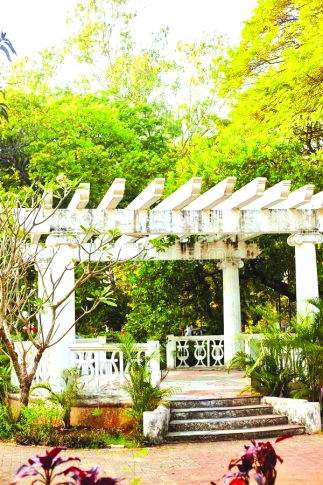 On the occasion of the World Habitat Day, the UN Secretary General emphasised on making cities more environment-friendly as benefits are ‘enormous’, and includes reduced climate risk, more jobs, better health and well-being. The theme for this year’s celebration of cities and towns worldwide is “accelerating urban action for a carbon-free world”. The IPCC 2021 report is categorical. In general, cities are responsible for about 75 per cent of the world’s energy consumption and over 70 per cent of global greenhouse gas emissions. Since the tipping point has been crossed, zero carbon urban infrastructure is the obvious option to achieve net-zero emissions by 2050.

The Goa State Biodiversity Board has formed a 45 member committee to prepare a biodiversity action plan for Goa. Considering the advice of IPCC 2021, crucial issues have been identified with special reference to the conservation of flora and fauna. Recently, the Ministry of Environment has released ‘guidelines on ecotourism in forest and wildlife areas, 2021’, aimed at promoting better understanding of nature conservation, and to promote biodiversity. Ecotourism may be developed in wildlife sanctuaries, national parks, conservation reserves, forests, mangroves, sacred groves, mudflats, wetlands and rivers. However, the document does not elaborate how the impact of footfalls or commercialisation of urban forest would be avoided. It appears that the government agencies have ignored recommendation of IPCC 2021 report.

In Goa, we keep hearing about government sponsored absurd “beautification” projects, but no one ever heard about any proposal for urban parks and gardens, creation of tree-lined avenues, regeneration of city forests or conservation of wetlands. Instead, heavy concretisation activity is seen in eco-sensitive zones, as in Miramar at this moment. Therefore, in view of the looming climate crisis due to excessive atmospheric carbon release, a significant contribution towards decarbonisation of cities would be to amplify manifold the green spaces, conserve existing natural assets, and restore and reforest degraded lands within and around major agglomerations.

Metropolitan forested ecosystems need to be considered here: (1) Urban gardens and parks: Panjim boasts of an iconic garden, Jardim Garcia de Orta, located in the heart of the capital city, and dates back to the 1850s, when it was built by the erstwhile regime to honor a noted Portuguese naturalist and physician. The garden includes a variety of lush green plants and trees, and serves as an ideal place for leisure activities. Some century old heritage trees can still be found in this park that occupies an area of about 11,500 square meters. In addition, Panjim also has other smaller parks adjacent to Adil Shah palace, one near the ferry point, the children’s park at Campal, and one near the bus KTC terminus. In Margao, the Aga Khan park popularly known as Margao Municipal garden characterises the city centre, built prior to the liberation of Goa, in area of 15,800 square metres. The northern portion houses the children’s park. In comparison, the cities of Mapusa and Vasco have nothing to offer in terms of green garden spaces. (2) Metropolitan forests and wetlands: The concept of wooded ecosystems within and around municipal limits is missing in our modern way of life. Panjim is blessed by an extensive mangrove marsh complex and wetlands within a backwater system that extends up to Ribandar and Santa Cruz. Mapusa city has similar natural setting, restricted only on the eastern side, whereas Margao is bounded by prominent wetlands on the western side. (3) Roadside boulevards: Campal is the only roadway in Goa which is bounded by a dense canopy of shady trees along a 2-km strip. Other three cities do present but a few trees along roads.

The concept of city gardens, forests and avenues seems to be neglected in Goa. Inspiration may be drawn from the capital of New Delhi and multiple parks that the city offers. The iconic Lodhi gardens and the compact tree lined avenues along Akbar road, Aurangzeb road or Janpath are examples to be emulated. In Bombay, the Azad maidan and Shivaji park may represent large open areas but fall short as gardens. The woodland of Aarey, Goregaon and Powai are some urban forests which have remained by and large intact.

Healthy urban forests improve air and water quality, provide wildlife habitat, stabilise soils, provide opportunities for recreation, and promote overall welfare of humans. As the trees grow they pull in carbon through their leaves and convert it into nutrients which they use to grow. So long as a tree lives, carbon remains within it, as trees can live for decades or centuries. Trees thus act as an enormous natural carbon sink. Research results reveal that 6 trees can offset 1 tonne of carbon, and that a trillion extra trees can remove a quarter of the carbon dioxide currently in the air. But these figures have been criticised and termed unreliable by a section of scientists.

In summary, Goa’s city gardens and heritage trees described above are all assets conceived and created by the erstwhile Portuguese regime. Nothing of significance is noted since then. Biodiversity of existing gardens needs to be enhanced. Open spaces as the jogging track at Altinho and Fatorda can also function as parks. Smaller parks presently lying in shambles can be rejuvenated. Uprooted urban trees need to be replaced. New roads are flourishing all over Goa; but the mandated plantations cannot be identified. On the contrary, recent reports about mangrove die-out along the new highway in the outskirts of Panjim puts our city forests in a perilous situation. Urban bio-reserves have to be conceived. Dense bio-shelter belts along heat generating concrete roads are imperative. While there is a consensus that protecting existing forests and aggressive planting will definitely help arrest and reduce impacts of climate change, they may not reverse it altogether.