IS THIS WHAT LIBERAL TOURISM MEANS? 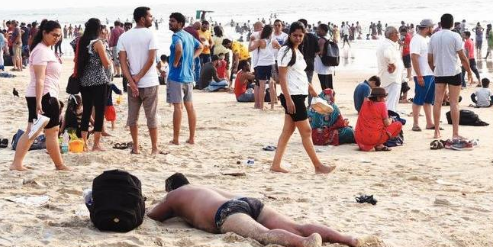 This year itself, two articles on Goa tourism – one on an international website the other on a national portal – had some ugly truths served rather harshly about the State as a tourism destination. These are truths that we in Goa would be happy to ignore but when confronted with it at the international level have to wake up to the reality that surrounds us. The articles described Goa as ‘hedonistic’, an adjective that is definitely not a pleasant one to be used to illustrate what we want the world to believe is a paradise and an unrivalled tourism destination.

Let’s begin with the dictionary meaning of hedonistic. The Cambridge dictionary gives this meaning of the word: ‘living and behaving in ways that mean you have as much pleasure as possible, according to the belief that the most important thing in life is to enjoy yourself’. Essentially it means partying with booze and drugs and all the possible pleasures.

The first report was on the CNN website and was headlined ‘Reinventing Goa, India’s hedonistic beach hideaway’. This article, that has the editor’s note stating that the series often carries sponsorship, asks whether ‘this destination once associated with untrammeled hedonism and rampant commercial tourism reverted to its old ways, with no thought to the negative economic, environmental and social impact?’ This was written with a post-pandemic perspective and hence the question worded in that manner. It goes on to profile a few business ventures that are making efforts to reinvent Goa by offering tourists something other than hedonism, but also drives home the point that the State has not changed its focus despite getting the opportunity bestowed by the slowdown due to the pandemic to alter the course.

The other article was on the site The Better India that profiles a couple that has started a tourism business in Goa, and states, “their eco-friendly travel venture was launched in 2012 as an answer to Goa’s hedonistic tourism culture.” Essentially, both articles, are promoting business ventures set up in Goa by persons who have recently settled in the State, and make an attempt to convince the reader that these ventures are trying to change the tourism image of the State. Who then is responsible for the term hedonism or hedonist being used to describe Goa? Or what is it that makes Goa be described as such? Is it the rave parties, the drug availability? Or is it just the lackadaisical attitude of the Tourism Department in branding Goa?

Interestingly, hedonism is not a term that has been used to describe Goa Tourism for the first time or only recently. In the 2000s, an article that appeared in the magazine section of the national daily Indian Express had described Goa stating, “If there is a hedonist’s haven in India, it is Goa. Prettier than a postcard, India’s tiniest State remains the vacationer’s hottest spot. And post-millennium, Goa’s become a hip international destination for trance-heads and rave-cravers.”

To a large section of the world, the silver sands of Goa that we Goans take pride in, is not a beachside paradise, but a place associated with ‘hedonism’ and a ‘destination for trance-heads and rave-cravers’. Reading something like this, makes one wonder whether we Goans are seeing a different Goa and the rest of the world another one. Goa has for long been associated with narcotics and psychotropic drugs and rave parties take place throughout the tourist season, even as successive governments resolutely deny this. So it was but a corollary of this for the State to be described as a hedonist haven.

Curiously, a search of the words ‘Goa’ and ‘hedonism’ on an internet search engine threw up many more examples of such articles. A 2015 article in The Independent titled ‘Take it easy in Goa, a different sort of India: The Hedonist’, has in its first paragraph this sentence: ‘Tinged as it is with leftover Sixties bohemianism, flea market psychedelia and recent waves of chic, Goa remains a lush, tropical enclave where sossegade – “take it easy” – is the order of the day’.

And there’s more. The Guardian in a 2013 article states, ‘Goa is India’s good-time state, the hedonistic hippy haven whose promises of sun, sand, cheap beer and drugs transformed it into a magnet for backpackers and budget tourists...’ The hippy era ended long ago, but it somehow never gets erased from memory.

While the State government and the tourism industry take pride in the fact that together they have taken brand Goa to different corners of the globe, the image of Goa appears to be in dire need of a complete and immediate makeover in the light of these descriptions. A forceful branding exercise should be undertaken to change the way many see Goa.

Goa has compromised with its identity in trying to be charmingly seductive to the traveller. That strategy has boomeranged horribly, as it allowed the guests to take unlimited advantage of its hospitable nature and convert Goa into their idea of what a tourist haven should be and not what the Goan believes that it should be. Brand Goa needs to be reinvented, not merely reworked, to meet the local aspirations and ideals so as to not send out the wrong messages to visitors.

For the ordinary Goan, tourism signifies travellers – domestic and foreign – coming to Goa and enjoying the natural beauty of the land, primarily its beaches, while also soaking up the culture with a day trip to the heritage sites, and then sampling the cuisine in the night, as Goan musicians serenade them at the dinner table.

That’s the untainted idea of a Goa most Goans have in our minds. That is also the very myopic idea of tourism that many in Goa have and view it as merely a commercial activity that keeps the economic wheels of many families turning. The underbelly of tourism, which makes up the broader picture, is not often seen and when noticed, is quickly glossed over.

Brand Goa should not and cannot be associated with hedonism. If, as the websites that termed Goa as a hedonistic destination found private players who are working to change this image, shouldn’t the government agencies do the same? Are crores of rupees of the taxpayer’s money being spent on sending out a false image of Goa? That’s a thought to mull over, especially after earlier this year the term liberal tourism was used by the government in relation to opening up the State for travellers.