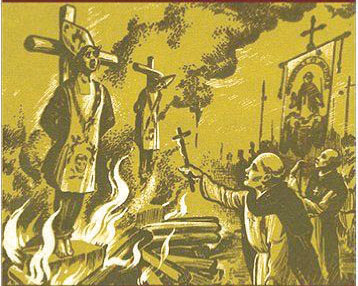 This has everything to do with an article written by Dale Luis Menezes on the Inquisition in Goa. The gist of Dale’s argument, if I got it right, is that A K Priolkar’s book on the subject is the cause of or contains a lot of misinformation on the inquisition in Goa. The writer does not exactly tell the reader which parts of the book seek to misinform or if all of it is total lie. Rather he makes a sweeping statement at the start that, “If there is one thing that unites all in Goa, it is misinformation about the Inquisition”. The next sweeping statement is that, “all Hindus are misinformed because right-wing propaganda is the main vehicle through which they receive information about the Inquisition”. No one is given the benefit of doubt and it is conveniently assumed that all Hindus are polarised, communalised and do not read anything else other that right-wing propaganda. He then traces the source of this “misinformation” to A K Priolkar’s book titled “The Goa Inquisition”.

The fact that no one till date thought it fit to dissect Priolkar’s book, to separate the wheat from the chaff, so to speak, makes one believe that there might be some truth in what he wrote. The article prompted me to read the book and it truly opens one eye to what happened in 16th century Goa. Priolkar starts out by admitting that all documents pertaining to the inquisition in Goa and Portugal were destroyed and hence he had to rely on other sources to fill the gaps. The book is structured in a way that lends credence to the charge that he depended heavily on the ‘Black legend’ and extrapolated it to Goa with the unsaid assumption that if the torture and terror happened in Spain and Portugal, it definitely happened here. Truth is the Inquisition came to Goa in 1560 and the consequences for natives was horrendous as pointed out in later chapters.

Dale’s article also mentioned the work done by Fr Henry Heras, “whose contribution to Indian history and archaeology is immense”.  Priolkar, in the book does mention Heras, who he refers to as Fr Heras, S J. He writes that Heras made a gallant effort to refute statements made by Bioes Penrose and other historians holding similar views (that force was used in conversions) in two essays, ‘Death of Portuguese Power in Goa and ‘The Conversion Policy of the Jesuits in India’ which were published in book form. “He was kind enough to present me copies of these essays and later enquired whether I agreed with his conclusions. On hearing that I remained unconvinced by his arguments, he accused me of being prejudiced against Catholics under the influence of protestant historians,” writes Priolkar.  If Priolkar was a half-baked writer with no credibility at all and given to misinforming, why would Fr Heras choose to interact with him?

One of the accusations against Priolkar was that he relied heavily on the work of Charles Dellon, who was imprisoned in Goa on charges of heresy and Francis Buchanan. He relied on them, but he also relied on several other writers, historians and travellers. Most pages have footnotes containing names of books and authors relied upon by Priolkar. And all of them cannot be wrong. In fact, the book is dedicated to the memory of Dr J H Cunha Rivara, “who facilitated the work of succeeding generations of research-workers by publishing documents available in the official archives of Goa”.  Priolkar’s quotes an essay by Dr Antonio Noronha, a former judge of the High Court of Goa titled ‘The Hindus and the Portuguese Republic’, which is openly critical of the conversion process.

He quotes letters written in October 1547 by a Jesuit priest Fr Nicolau Lancilotto to Fr Ignatio Lovola, which lists several reasons of the temporal nature, other than faith, for conversion.

Then comes a damning piece of evidence in the form of a resolution adopted by leaders of the Hindu community in 1541 donating over all the income of temples situated in the island, since these temples had been destroyed, to chapels built on the island.

One would have to be a fool to believe that this resolution was adopted willingly, and without any force. In an essay titled ‘Foreign Jesuits and native Resistance in Goa 1542-1759’, Charles J Borges writes, “Village lands had been appropriated in a number of ways to provide foundations for the religious colleges and convents and to procure funds for foreign missions. The Jesuits alone were said to have possessed half the income of the Public Treasury. They were absolute masters of a great part of the island of Goa and the property they had in Salcete was considered to be sufficient to maintain all the religious houses in Goa.”

Then comes Chapter VIII, which lists all the anti-Hindu laws promulgated in Goa – the banishment of Hindu leaders who were considered inimical to conversion of natives, threat of being imprisoned, confiscation of property owned by Hindus, forced adoption of Hindu orphans and subsequent conversion, restrictions and subsequent ban on Hindu marriages, ban on performance of Hindu rites, ban on Hindu priests, orders compelling Hindus to listen to Christian doctrine, laws depriving Hindus of their means of sustenance, measures depriving Hindus of rights and privileges in village communities and more.

The Hindus sent petitions to the king protesting against these laws, but almost always, were overruled by the Holy Office. Can all these laws and measures be construed as misinformation?

Dale’s article was posted on Facebook and it generated a heated debate. It was during this debate that I asked if anyone had written a counter to Priolkar’s book and he advised me to read Fr Anthony D’Costa’s ‘The Christianisation of the Goa Islands 1510-1567’, which I did. It is an intriguing book, but I will save my reaction to it for another article.

(Derek Almeida is a senior journalist)