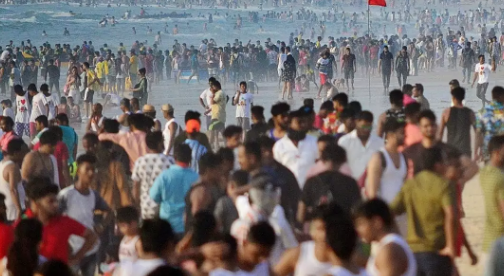 What more is left to see and experience of Goa the cradle of love, communion and hospitality. The Goa of the of lush green fields, seas, hills and trees! The Goa of Flora and Fauna! The day starts with a bright morning, while the creation sings God’s glory. The rain, the winds and the swaying coconut trees and the drops of water falling on the ground, things and aluminum sheets creates wonderful melody honouring the Lord God Almighty in word and deed.

It’s sad and sickening to see and hear, read the daily shameful acts on newspaper created for publicity, to divert the minds of people from burning issues. What do the readers expect to read in the dailies? The mind games of the inefficient ruling government? Is the government so weak that public has to knock the doors of the judiciary to chose and decide the fate of Goans? Are we in a haste to welcome and nurse the third wave having gone through the worst just a month way back to allow people to come or enter the State be they Goans without test? What proof have the vaccination proved? Have we not lost lives even after vaccination? There are people still recuperating from Covid after having taken the shots. So why was the hurry to amend and modify the earlier order regarding inter-state movement of people?

Well, the relaxations extended and with that the cases too increased. Today its 0 death tomorrow what awaits is question mark? And with this relaxation is the government saying, next week it’s a green signal for casinos to open? We request the government not to act in such a hurry; especially the reopening of casinos to avoid the third wave.

We had heard of stunts by the celebrities but the recent ruckus at Nuvem is shameless. Was it a stunt or publicity? Recently Nuvem was also in news but for wrong reasons. An untoward incident happened when a youth lost his life due to the careless act of those on duty. Did the supporters of the stunt company, go out in support of the broken parents who lost their only bread winner due to negligence of the concerned persons? Power and might shown when in dire need would prove fertile and not otherwise!

Can the powerless expect any good in the coming elections? The mind games. Do we smell a rat in the extension of the cabinet at the Centre, the Portfolio to the Goan MP, is it in the interest of the people or to fulfill the hidden agenda and to have full hand in taking over what is left. We have seen a couple of years back MLAs switching or hopping from one party to another to hide their sins and escape the prisons. Will the real Goan stand up and stop running after the current elected representatives, who are mere liabilities than assets?

There is so much on the platter. Yes, Goans feel suffocated. The CZMP, the double tracking, the coal, marine project, etc the deadly disease that mutates and its different variants. Is the State prepared to tackle the third wave to allow entry in the State without test certificates?.