Major Ports bill: When people’s interest is consumed by those who define ‘national interest’ 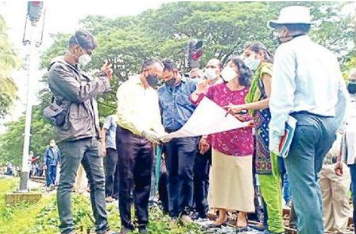 Dovetailed in the Major Ports Bill 2020, introduced in Parliament by Union Minister of State for Shipping Mansukh Mandviya, are at least four sections including sub-sections, each of which peels layer after layer off any veneer of pretence that our water resources, the land around rivers, livelihoods and the needs and feelings of traditional communities have any importance or protection. The Major Ports bill is a part of the grand plan, a plan which includes using the highways, the railways and waterways through Goa as a conduit for the transportation of material, mainly coal for projects outside Goa, with absolutely no social or economical benefit to Goa and  Goans.

Before deep-diving into what environmentalists and others knowledgeable enough to understand the implications the draconian sections of the Major Ports Bill, the larger narrative of the opposition which is gaining ground draws attention to the linkages between the projects involving shipping, highways and railways, each of which seeks to acquire land for widening or increasing  its assets, be it railways tracks, jetties or highways. The troika of National Highways expansion piercing through the Bhagwan Mahavir Sanctuary, the high tension power line and double tracking of the tracks of South Western Railway has resulted in over 50 panchayats and counting, voicing opposition and passing resolutions of objection. Goencho Ekvott, an umbrella organisation of over 20 NGO and groups are moving from village to village explaining the impact of these protests. At the same time the evergreen warrior Claude Alvares and his Goa Foundation have moved court against the three projects with the respondent state authorities and bodies asked to file affidavits in reply. At the same time, the Court has asked Goa Foundation to report to it in case of any activity towards furthering the cause of the projects on the ground, is noticed.

Another dot sought to be concealed is the nationalization of waterways which effectively gives the mandate for managing Goa’s water bodies to the National Waterways Authority of India.

However, the fundamentals of this scenario, even if you consider the size of the behemoth - the government- which has the levers of control, is that local bodies and people still have the right to object. There is no absolute finality. There are windows of protest still left open forcing the government and the project proponents to have EIA reports, hold public hearings and meet protestors. Therein lies a semblance of a democratic space.

The Major Ports Bill though seeks to remove even a fig leaf of any consensus, opinion or feedback by pretty much exercising absolute control over the territory of its ports. There may perhaps be room for arguments that if the territory belongs to the ports, why would it need to seek permission from anyone for carrying out any kind of activity within it. But within the area of the Mormugao Port lies coastal areas, fishing villages, traditional dwellings, each of which is going to be affected when the Major Ports Bill comes into force.

The bill seeks to provide for regulation, operation and planning of major ports in India and provide greater autonomy to these ports, and will eventually replace the Major Port Trusts Act, 1963. The all-powerful Board of proposed Major Port Authority will be empowered to carry out construction and development activities on their assets including within port limits without any reference to local town planning and development laws. Yes, no permissions are required from the state government let alone any other local body like Panchayats, Municipalities, PDAs to carry out any activity within the area.

The space to object has been taken, the room for discussion and debate has been sealed.

Let us now reveal four sections that need urgent and critical attention. These are reproduced verbatim with the operative part in each section marked in bold, which explains how and why this will be done.

(i) Sec 22 (2): All port assets shall be used and developed as per the regulations made by the Board in that behalf and to the exclusion of any municipal, local or Government regulation.

(ii) Sec 22 (3): The Board of each development or improving commerce and trade in national interest for which no regulatory licence or approval from the State authorities shall be required unless so mandated by the Central Government. Major Port may erect, construct or build such civil structures for the port.

(iii) Sec 25:  Subject to the rules made under this Act, the Board of each Major Port shall be entitled to create a specific master plan in respect of any development or infrastructure established or proposed to be established within the port limits and the land appurtenant thereto and such master plan shall be independent of any local or State Government regulations of any authority whatsoever: Provided that in case of any conflict between the master plan created by the Board and any local authority, the master plan created by the Board shall prevail.

Goencho Avaaz, an organization in the forefront of the opposition to the Major Ports Bill, spearheaded by a former Naval officer Captain Viriato Fernandes has written to the Union Minister of Shipping  appealing “to the Government of India to amend the said Bill and exclude Mormugao Port Trust from being vested with the powers provisioned in the Bill in the larger interest of the state of Goa and its people, especially those having dwellings along the coast as well as dependent on the produce of the river/sea”.

The letter stated “The draconian provisions in the bill that give total authority to the Port Trusts to undertake the so-called “developments” along the coast/river bank with independent powers vested unto them through this proposed bill is a sort of creating a parallel authority within a  state”.

The reach and control of the MPT over the lands of Goa is enormous. Port Limits of MPT was defined and declared by the Ministry of Transport, on Nov 16, 1963. It covers the entire area from Cortalim Jetty to Raj Bhavan, Dona Paula, the entire coastline of Mormugao Taluka and up to and including Arossim beach and extending and including the coastline on both sides of the Betul beach.

Further, on July 9, 2001, 16,29,795 sq. mtrs within and around Mormugao Port and Vasco da Gama  were handed over to the MPT by the then Manohar Parrikar government.

If you step back and see the bigger picture, the state by playing the development card, is moving in, like a pincer, taking control over lands and people, according to its own estimate and perception of “national interest”. But how can it be justified that national interest has to supersede or exclude local interest? What is happening here is that “national interest” is consuming local interests as a whale does to small aquatic life forms or marine mammals.

A development road map which disturbs the ecosystem and the environmental balance by affecting forests, trees, wildlife, indigenous communities, ancient dwellings and even livelihoods, for highways, port expansions, railways, marinas and jetties, et all, needs a serious relook. When this roadmap has the armour of legality and the law, either existing or newly construed like the Major Ports Bill; the level playing field between those who are powerless and affected, and the State which purportedly acts on behalf of the people, gets skewed.

The ability to make law and enact legislations or define ‘National Interest’ cannot always override the fact that it is the fundamental duty of Governance to give confidence to the common man, that it is working for its interest. When a swathe of people in Goa, many of them educated experts with a long history of involvement and study on issues confronting people, have a conflict with the government’s assumption that these decisions are in the national interest, they cannot be crushed under the power the state wields.

This is when public and elected representatives come in. The local bodies and people have played their part. May we ask, if either of the two MPs from Goa rose up in Parliament to utter a single line of protest or seek an amendment to the Major Ports bill which is going to affect the fate and future of so many in Goa?

Their silence signals a false approval of the people they represent. Even a word in favour of ‘people’s interest’ uttered by the two MPs of Goa, may have caused a rethink in the minds of those who are defining national interest for us.