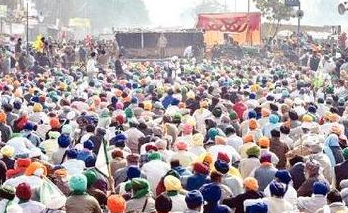 In winter’s chill or summer’s heat a farmer toils so the world can eat. Farmers don’t just labour till the sun goes down. They work till the job is finished. In the past, when Indian agricultural workers protested for fair prices and working conditions, the Indian government responded with violent crackdowns that included documented torture, human rights abuses and extra-judicial killings. We must proactively be concerned about the exploitation of the people who feed us every day. The incessant appropriation of everything from education to defence, from public sector undertakings to small-scale-retail business, from government offices to the Parliament Bhavan, from Airports to the Red Fort - the process of bringing everything under corporate capitalist system has been going on unabated for quite some time. It is now time to ask “mirror mirror on the wall, show me who is behind this all?” and the mirror will flash the faces of the two most powerful Gujarati politicians. Next the mirror will promptly show the faces of the countries two richest businessmen, again both from Gujarat! What a coincidence! Both have been long time cronies of Modi from his days as the Chief Minister of Gujarat.

The global experience across agricultural markets demonstrates that ‘corporatisation’ of agriculture without a concomitant security in the form of an assured payment guarantee to the farmers’, results in their exploitation at the hands of big businesses. The extraordinary haste with which the farm bills were pushed through both the Houses by the NDA government has created the present crises. The three farm related bills were passed on a Sunday, September 2020 by a ‘voice vote’ despite a request for an actual vote. The demand by the opposition for discussion on the bills was also rudely turned down. When injustice becomes a law, resistance becomes a duty. A right to protest is a fundamental right. There may be times when we are powerless to prevent injustice, but there must never be a time when we fail to protest. It is the Government which ought to resolve farmers’ issues not the Supreme Court.

Protestors began gathering in New Delhi last August, even before the farm bills became laws the following month. Tens of thousands of farmers joined from around the country, and the protest reached a peak on Nov 26, when an estimated 250 million people participated in a 24-hr strike against the reforms. Officials are particularly concerned and jittery about demonstrations planned on January 26 on the National holiday for Republic Day. It is noteworthy that till date the movement is completely peaceful and dignified. Yet, Chief Justice of India (CJI) Sharad Arvind Bobde has expressed that “Fears are growing that the largely peaceful protests could turn violent.” This is because India’s demoralised, impoverished majority has suddenly become aware of the danger that stares them in the face. It is our duty to protest. The National Commission of Farmers (NCF) was constituted on 18.11.2004 under the Chairmanship of Dr HS Swaminathan to address the nation on the calamity of farmers’ suicides in India. The report underscored the fact that more than half of the Indian farmers are in debt.

The Union government has by-passed the federal structure by legislating on subjects that exclusively fall within the domain of the State governments. Farmers are not being misled by anyone. They are raising valid and genuine concerns. The farmers’ struggle highlights the Centre’s violation of the principles of federalism because it has legislated on a State subject without consulting the farmers or the State governments. The three laws are meant to dismantle the mandi (wholesale market) system and the minimum support price of agricultural commodities. Such a law was passed by our democratic Parliament hurriedly, demolishing not only farmers ‘rights but threatening the right of all Indian citizens for food security.

More than half of India’s population comes from the agricultural sector. In recent years the growth rates of world agricultural production and crop yields have slowed. Agriculture is really a thankless, risky and back-breaking job. The next generation of farmers is quitting. It is feared that there might not be a next generation of farmers in the country. Why are farmers poor? The simple answer is their lack of liquidity.

Right here in our own Goa the first round of battle has been won by the farmers. Chief Minister Pramod Sawant has withdrawn the coming up of an IIT institute at Shel-Melauli by usurping the rights of the original owners of land. The Portuguese rulers in Goa had conferred Alvara Rights to over 8000 villagers of Sattari, Pernem, Dharbandora and Sanguem through a Decree No. 3602 dated 24/11/2017. The government of Goa has set a claim to this land and looks upon the original owners as “trespassers.” A group of simple farmers from in and around Shel-Melauli taught the powers that be, viz. the State of Goa that it is the real de-facto trespasser. A force of over 7000 police who were sent to disperse and break this peaceful movement of the people at the behest of our CM Pramod Sawant and the local MLA Vishwajit Rane, has rebounded and was rendered impotent by a united people. This victory by the people from the village of Shel-Melauli will stand testimony to the fact that people’s power cannot be taken for granted for it can shake any government from their perpetual numbness and indifference. This victory will surely give hope and impetus to all those fighting for various causes to protect the unique identity and sanctity of Goa.

(The writer is a social scientist and a practising criminal lawyer).