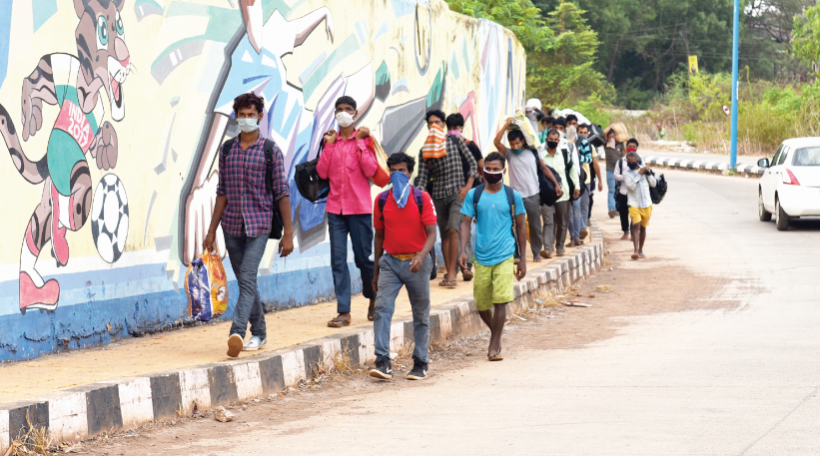 The Bhumiputra Adhikarini Bill, 2021, is yet another case of Function Creep, along the lines of central legislation such as Aadhaar Act, and the Trafficking of Persons Bill, 2021. In the name of one broadly articulated objective, other sinister objectives are sought to be achieved. That is the concept of function creep. The stated objective of the Bhumiputra Adhikarini Bill is to provide for a mechanism to give ownership rights to the self-occupied dweller of a small housing unit to enable him to live with dignity and self respect and exercise his right to life, but the real objective is quite another.

If one goes by the provisions of this law, a person who has lived in Goa for more than 30 years who has a house of his own, could have given his large house on rent, built a house in his field illegally, or worse still in somebody else’s field (one that a tenant may have been purchased from another landlord under the Agricultural Tenancy Act), and occupied the same, or not even physically occupied the same, and then he can lay claim to that unit on the pretext that it is his self-occupied dwelling unit. There is nothing in the law to suggest that the person should not have owned another dwelling unit, if he does not reside in the same.

The Constitution of India under Article 21 indeed provides for the right to life and personal liberty. But if that be it, and that should include housing rights, why call it a Bhumiputra Bill? Call it a housing rights bill, not a Bhumiputra Bill, is what so many tribal representatives are saying. Why ramp up Bhumiputra feelings, when so many Bhumiputras are still struggling to get their rights under the Mundkar Act? If the tribal people have failed to get their rights under the Mundkar Act, when they are really and genuinely mundkars, what is different in this law that would enable them to get those rights under this Bill?

True, Mundkar Act does not apply when it comes to Government land. If that be so, then the issue can be resolved by making an amendment in the Mundkar Act. It becomes clear that the Bhumiputra Adhikarini Bill is meant to pull wool over the eyes of those who are shelterless be they Goans or be they persons who have been long term residents of Goa, when the actual motive is to team up with at best a few of the shelterless people and boost the slum lords and the real estate business tycoons that will find it easier to acquire more land for their real estate business because people are likely to sell their lands in desperation to rule out the possibility of losing the value of the land that may be claimed.

Also, increasingly the Courts have clarified that tenanted land cannot be sold, and so also the law prevents a mundkar from selling the land once he has purchased it as a Mundkar for a specified period. What in effect is done these days is to hold out the carrot of a modern flat to the mundkar, often without proportionate share in land rights, or even no land rights, and to dissuade the mundkars from claiming their mundkar rights. Alternatively there is a group of extortionists at work, who have the blessings of the politicians in power, who make claims for mundkarship or possession, without really having any such rights, and then present what seems like a win-win situation for the so-called landlord and the so-called mundkar, where the builder gets the land at a cheaper rate, and the so-called mundkar along with the politician backing him up gets a big deal.

There is also no clearly defined process by which the rights-holders will be ascertained under this law, apart from stipulating that a Bhumiputra Adhikarini Committee will be constituted under this law. And what does one say about the BhumiDus or the Bhumiputrinns? From the Mundkar Act, one sees that there is no synchronisation of rights under the Family Laws with the synchronisation of rights of the members of the Mundkar family. The same definition is adopted here in this law, completely ousting the married daughter. This Bhumiputra Adhikarini Bill is only meant to be like a gun to be fired from the shoulder of the Goans or long standing Goans to achieve their ulterior aims of usurping Government land and Comunidade land to subserve the interests of the politicians and capital, specially global capital.

There are those who argue that this bill is intended to be a precedent for the rest of the country, to be a means to bring land or land illegally reclaimed by the Government or by corporates, under the scope of land revenue for providing the same to transnational capitalists. It could well be so. Goa has been made a poster State for initiating all kinds of top-down legislation and planning processes, and this could well be a continuum.

And what of the Goans who have affirmed their Portuguese Citizenship, a right hard won by Goans from the Portuguese, as a way to access jobs in the European Union? Their homes and hearts are in Goa, but their voices have no weight in Goa. They remit monies to their near and dear ones, with which the near and dear ones have been able to sustain themselves in Goa, not just generally, but even during COVID times. It is they who in many ways are sustaining the Goan economy for the people. And yet, where is the concern for these people and their housing rights – for when they can come back after their retirement to be at home?

This Bhumiputra Adhikarni Bill then is a continuum of the Major Port Trust Authorities Act, the National Waterways Act, the Citizenship Amendment Act, 2019, meant to provide citizenship to transnational corporates and to the corporate state, but not to persons/human beings who have their legitimate rights to housing which they have been denied in all these many years.

Last but not the least, for a legislation which makes a drastic change from the existing pattern of legislation, where is the consultation process and studies that necessarily had to precede such a legislation to ensure its efficacy to meet the broad articulation of its framers of housing rights? Where was the time for the legislators to deliberate on this?

(Albertina Almeida is a lawyer and human rights activist)