The Overton Window and the political change 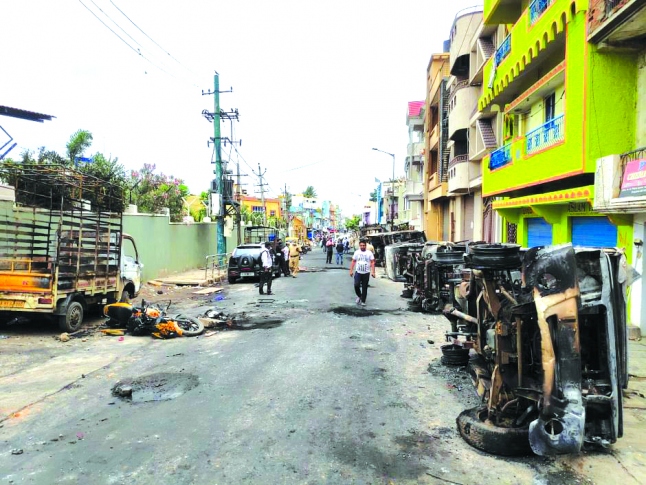 The social imaginary of our country has significantly changed. What was thought to be fringe has come to the centre. What was once unthinkable and unsayable is now heard everywhere and provokes our thought and conditions our life at several levels. The old centrist consensus that aimed at the common good of every Indian is replaced by a shameless, arrogant and majoritarianism that is on the threshold of the tyranny of the majority. What we once considered as blaspheme has now become an everyday discourse. The ideas that once risked popular support have now become mainstream.

The Congress has been dislodged by the BJP that is a war horse of the far right. We are witnessing a rapid shift towards the far right in our society and we are becoming more and more intolerant of otherness by the day. Both far left and far right impose an imagined homogeneity on the people. The right wing forces are forcing a sameness on our country. What passes of as timeless Hindu nationalism can be traced in the 19th and 20th century and is tainted by Hindutva that is far removed from liberal and tolerant Hinduism as well the welcoming ethos of our Indic civilisation.

Maybe to understand how we have changed, we may have to take the help of the Overton Window, a notion developed by public policy researcher, Joseph Overton. Passing of the CAA or the farm laws at the centre or the Bhumiputra act in Goa has overturned the Overton Window as a result, the centre as well has the Government in Goa had to face the flak of the people. We can also find how the same kind of reaction with regard the statement of the CM of Goa made in the legislative assembly that criminalised late hours of the day and lonely places in the State for women and tried to push the responsibility on the parents to protect girls from being raped. This means the policies and statements that the politicians make depends on what is called the reigning Overton Widow. Every society has its own Overton Window.

Although the Overtone Window has changed and is tilting towards the right yet it still enables us to reject policies and actions of the Govt that are viewed as unjust. Some issues like the CAA and the farm laws have exhibited people’s anger. In these cases, it seems that our people have shifted the Overton Window from the right but by and large we can be noticed that our Overton Window is tainted with stains of saffron. This is why the Overtone Window of our society did not seem to equip several among us to contest monstrous crimes of lynching as well as enable us to see brutal crushing of dissent as a loss of freedom and democracy. The Pegasus project that has allegedly invaded our privacy has also disturbed a few.

Our silence, therefore, has to be understood as rising from inside the Overton Window. The Overton Widow of our society has turned towards the right and hence, we assimilate without interrogating several statements of our politicians as truths of science when they link them with our imagined golden past. Thus, politicians utter hatred or even utter nonsense and go scot free without being charged for inciting hate as well as make fake claims that masks as scientific truths. It seems that neither we nor our opposition (except a few) nor the media have the courage to endorse that which now clearly lies outside our Overtone Widow but aligns with the values and ethos of our tolerant civilisation and our jest for wisdom. We are only repeating what we deem as valuable and imagine as something that promotes the golden past. There is no place for the future in our society. The future is simply the future of the past. This means future cannot become truly future. This means our politicians have become followers and not leaders. We are only living with what lies within the Overton Window of our society.

It is time that we understand the costs of our silent enslavement to the reigning Overtone Window. Sinking economy, loss of peace in a society marked by hate and restlessness, take over our national resources by a likes of the Ambani and Adani, lack of democracy, loss of several basic freedoms etc, cannot be noticed as we are blinded by the glow of the reign of the Overtone Window. We can see how there is an attempt to match the promise of free supply of electricity of the Aam Aadmi Party with a promise of free water supply by the BJP in Goa. As elections are nearing, the race to mimic each other’s freebies has just begun.

The challenge is to shift the Overton Window so as to embrace that which is emancipative and lies outside it. Regional political parties certainly change the frames of Overton Window at some level. We can see how Goa Forward Party had made room for the Goan interest in politics. This has also opened the play field for other stake holders like Goycho Awaaz. We may remember how a tragic loss of life of our children in Calvim, Aldona sometime in the past had sealed the political career of a seasoned politician. Shift of political discourse does enable us to shift the Overton Window. To do this we need to enable creative, critical and dissident voices in our society. Unfortunately, with the suppression and silencing of dissent, we lack critical voices. The political discourse that shifts the blame on the grand old party actually hides the inefficiencies of our Government. Besides, a rudderless leadership of the Congress both at the national and the state level fails to inspire confidence. Hence, it has become next to impossible to shift the reigning Overton Window. But to bring change and emancipation, we need to devise ways to bring about a shift in the reigning Overton Window to save Both Goa and India.