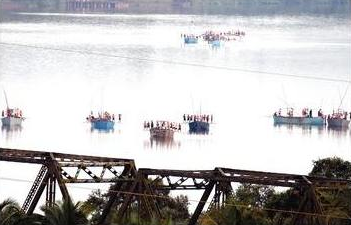 The recent headlines in the local press that “70 cubic metres of sand dumped back into the Chapora river” and that “illegally extracted sand dumped back under Amona bridge” is rather disturbing. All this while, sand extraction happened mostly in Tiracol river; but now it appears that mining of sand is spread in all the seven major rivers of Goa. Most of this activity does not have approvals from competent authorities, as it is banned. Heavy mining in the River Zuari at Curtorim is the latest example. With illegal sand extraction now being reported within the rivers almost daily, it is obvious that there is no respite in the relentless assault on the sensitive natural ecosystems of Goa.

Where is the sand in the rivers derived from? In general, rivers consist of three units: The upper course, closest to the source, in high mountainous parts, with steep gradients, V-shaped valleys, waterfalls, gorges with fast-flowing water, lot of vertical erosion and weathering. The middle course river features include wider, shallower valleys, meanders, and oxbow lakes. The lower course of river features consists of wide flat-bottomed valleys, floodplains and deltas.

All along the river path, there are three main types of geological processes that operate: erosion of rocks, transport of debris and deposition of sediment. In the higher rugged terrains through which high energy water comes hurtling down the slopes, erosion of surface rocks generate pebbles, cobbles, shingle, gravel and sand. The larger fragments get pulverised during transport over long distances. Sand grains thus formed get deposited in lower areas as water velocity slows down.

Haphazard and reckless mining of riverine sand is showing several deleterious impacts: (1) Degradation of river banks: It is sufficient to compare Goa side of Tiracol river banks which are in various stages of degradation with those of Maharashtra which are relatively intact; excessive activities take a heavy toll on adjacent borders wherever sand extraction is observed; unrestricted movement of men, material and machinery is also a major cause for concern. (2) Deepening of rivers: There is no data on the present depth of rivers wherever mining is happening; however, collapse of banks is reported at many places, obviously due to a disequilibrium in the morphology of the river; in fact, sand extraction in Tiracol has triggered collapse on Maharashtra side. (3) Absence of intertidal zone: Rivers of Goa are characterised by a significant strip that gets exposed at low tide; all mining sites are devoid of typical gradients due to erosive activity along banks, caused due to disproportionate removal of sediment from the river. (4) Damage to and loss of mangrove fringe: Being land builders, mangroves denote stable river borders; however, disappearance of mangroves is common in areas where river banks are disturbed. (5) Mutilation of benthic and riparian biodiversity: A disturbed river bed is bound to disrupt fauna leading to depletion of fisheries potential; continuous removal of sediment will lead to extinction of river bed species. (6) Influence on water quality: Churning of any water body leads to generation of suspended sediment load in the water column. (7) Impact on foundation of bridges: The present depth to the river bed around columns of bridges is not known; deficient sediment supply is bound to create scouring around foundations and impair their stability due to erosion around foundations. (8) Restraining of sand supply to beaches: Sand carried by rivers is ultimately deposited at the mouth of estuaries. Littoral currents then transport and deposit sand up or down the coast, a process by which sandy beaches are nourished naturally. If large quantities of sand are removed from rivers, beaches will be starved of sediment inducing erosion, a process that has become chronic on some beaches.

If illegal sand is to be reimbursed to the river, how and where is sand to be dumped back? Regrettably, studies on sand budget of rivers of Goa was never done. The composition, actual thickness, lateral distribution and volume of sand deposits in rivers are not known. A scientific sand mining policy that governs the quantity of sand to be extracted from a specific site is lacking, although there are guidelines and criteria meant to control this haphazard human activity. A scientific study on the impact of mining within rivers is again lacking. Importantly, any activity in tidally influenced saline rivers is governed under the realm of coastal laws (CRZ); specific distances on both banks are classified as No Development Zones where no commercial activity is allowed. All these regulations are thrown to the winds. Paradoxically, in river Tiracol, sand extraction is allowed along the southern Goa river bank; but such activity on Maharashtra side is prohibited.

Mining of sand per se should not be a problem. Sand deposits are entirely composed of silica or quartz that constitutes the most dominant mineral of the planet earth. The Indian peninsula for example is mostly made of granites and gneisses in which silica is major mineral. Sand generated due to erosive processes ultimately finds its way towards the ocean. As our sand in the rivers, sandy beaches, dunes and coastal plains are all siliceous. But the sensitive issue is how much sand is to be extracted and from where. Beaches and dunes are protected by law. River beds can be mined manually but not ransacked. Existing laws are snubbed. Hence the proliferation of sand mafias. Natural sand is a part of the ‘commons’ and is meant for collective benefit; sand is not the property of a selected few.