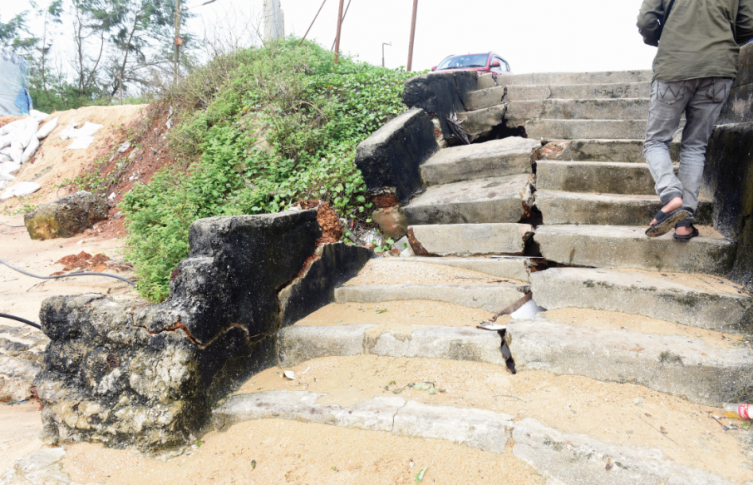 Notwithstanding the pandemic protocols, the coast of Goa, the sandy strips in particular, has been under continuous onslaught from clandestine human actions. A variety of covert construction activity, both by government agencies as well as private parties, is being reported almost on a daily basis. Hard structures are thriving along the sea front. Concrete has now become the buzzword along the beaches of Goa. It is thus obvious that the parties concerned are utilising the cover of Covid-19 to carry out nefarious activities. Beaches of Vainguinim, Morjim and Sernabatim have been the latest casualties of human folly.

Human activities on/along the coasts of India are governed by the Coastal Regulation Zone (CRZ) rules. The guidelines are explicit. CRZ 2011 notification identifies the marine area between the low tide line (LTL) and the high tide line (HTL) as CRZ I and, as such, an ecologically sensitive zone. CRZ 2011 has three major categories: prohibited, regulated and permissible activities. Under section 3(iv) of CRZ 2011, land reclamation, bundhing or disturbing the natural course of seawater is prohibited; however, measures for control of erosion need EIA studies. Scientific investigations of any kind were never ever done prior to concretisation of the coast that we observe at present.

Sandy beaches belong to the ocean. That is where the waves break and the sea comes to rest. Sea waves that rush towards the beach must get attenuated or nullified all by themselves without any hindrances. Here, the beach width, dune height and vegetation density play an inherent defensive role. As such, if the incoming wave encounters a hard obstacle, as a vertical concrete wall, before its energy gets neutralised, consequences on the adjacent beach can be dramatic. Since powerful waves break on the hard wall, reflected waves are created, thus resulting in high energy turbulence and a ‘confused sea’, a condition highly damaging to stability of beaches.

Examples of destructive effects of sea walls on adjacent beaches can be cited all over the Indian coast: (a) At Querim in Goa, a 300 metre long rubble wall was fixed in 2008, and tripods laid in 2010, blaming coastal erosion; in 2012, 2013, 2015, 2019, 2020 the beach in front disappeared completely, confirmed from satellite images; the strip has become overtly dynamic. (b) At Campal, a laterite boulder wall was erected a decade ago to tackle erosion; the narrow beach has vanished. (c) In 2018, a km long boulder wall was built at Malpe, north of the fishing harbour, and where in fact the beach was intact; within months, the beach went missing. (d) Kerala is an example where around 60% of the sandy coast is bordered by concrete or rubble walls; but sand has gone away and beaches have narrowed.  (e) In Kovalam, a high wall was built in 2009; the original beach has virtually disappeared as it gets submerged at high tide. (f) Pondicherry had a wide beach in the 1950s; it is now gone, thanks to the embankment along the old city; after the tsunami of 2004, the entire coast is dressed by rubble mound walls; open sandy stretches of the city have now become history.

The intensity of detrimental impacts of concrete structures on the beach has been reported globally: (i) Irreparable topographical alteration, damage to embankments which form a micro habitat for many faunal assemblages, (ii) Permanent loss of natural riparian faunal diversity, (iii) Damage to floral and faunal species during excavation, (iv) Possible effect on the avian refuge (potential roosting and nesting site for birds), (v) Negative influence on shoreline fisheries, (vi) Churning waters promotes erosion along hard structures, (vii) Sediment is transferred towards the sea, and consequently, the intertidal area in front of these walls gets deeper, thus affecting the stability of structure itself, (viii) Height and width of beaches is severely affected negatively, (ix) Worst of all, loss of sediment creates a permanent harm on inherent natural protection that a beach offers against extreme oceanographic events. Global research confirms that beaches backed by hard structures are damaged irreversibly. It is evident that sandy beaches in front of open sea walls drastically decrease in width, erode away and disappear. Therefore, sea walls and revetments enhance erosion.

Invariably, wherever concrete walls are emplaced, medicine turns into disease. Simple and cheap solutions and guidelines, without side effects are offered: (1) Preservation and conservation of sand dunes at all coasts, as there is no compromise on this issue; (2) The role and functions of sand dunes as Nature’s first line of defence against mighty oceanic forces have to be recognised and accepted by the administrative establishments; (3) Sand nourishment and replenishment of eroded beach needs to be a routine exercise; (4) Restoration of degraded sand dunes or creation of artificial dune fields has to be taken up wherever needed; (5) Promoting the growth of dune creepers as ‘ipomoea’ is imperative as these plants bind sand; (6) Emplacement of sand fences along the frontal dune line is imperative to curtail trespass, avoid trampling of vegetation and trap eolian sand; (7) Purely temporary structures, if any, should be located on the dry beach only; (8) Retreat from an affected coast to a safe distance inland needs introspection; (9) Coastal shelter belts in the form of buffer wooded biozones that nullify inundations need to be designated by law; (10) A sincere political will that promotes the principles of coastal management is the only hope for the welfare of functional natural coastal systems.