The Healing Title: Solace of Migrants 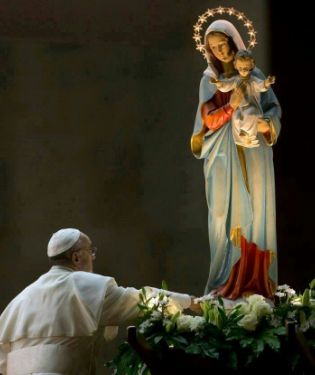 During the last three months we have observed how our beloved Pope Francis has called upon the church, the whole humanity, be it through the praying of the ‘Our Father’ ‘the Holy Rosary’ and the ‘Hail Mary’ or to pray to God as per the individual religion for relief from the fatal disease, to obtain a vaccine and so on.

The current pathetic situation has led the Pontiff, His Holiness Pope Francis, to have recourse to Mary, most ardently by declaring and calling upon her to intervene like the wedding of Cana at Galilee! The Pontiff is known for his devotion to Mary much as an Archbishop, when he introduced the devotion to the Mary Undoer of Knots. The devotion to Mary, Undoer (or Untier) of Knots is about 300 years old, but became more widely known as Pope Francis spoke about and promoted it throughout his papacy, and while he was Archbishop of Buenos Aires, Argentina. Pope Francis had said: Through Mary, “All the knots of our heart, every knot of our conscience can be undone.”

Yes, the compassionate and merciful Pope, has given the Virgin Mary three new titles, to be added to the ‘Litany of Mary’. The Vatican announced in the last week and came into force from June 21. The new titles are “Mother of Mercy,” “Mother of Hope,” and “Solace of Migrants.”

In letter dated June 20, Guinean Cardinal Robert Sarah, prefect of the Vatican’s Congregation for Divine Worship and the Discipline of the Sacraments, announced the titles would be added to the Litany of Mary. The first new title the Pope says: is to be placed after “Mother of the Church,” the second after “Mother of Divine Grace,” while the third will go after Mary’s designation as “Refuge of Sinners.”

He has also been a champion of migrants and refugees since his election in 2013, making frequent appeals on their behalf in his public audiences, and in his meetings with diplomats and heads of state.

The irreparable damage done to life beyond understanding has left the Pope to hang on to Mary, seeing her as a vessel of Mercy, Hope and Solace. Yes, beyond words…Solace of Migrants… who else could understand the pathetic state of the migrants if not Mary?, the young maiden of fourteen years with child who travelled to Bethlehem on an ass the thirty miles long distance in the scourging heat of thirty degree Celsius, in the freezing nights and the rains…? Besides, these ordeals, the hunt for the stay and the impending delivery? Oh certainly, Mary the Migrant has faced it all. No doubt! the uphill and the downhill… before the birth of Jesus, besides the overnight flight to Egypt over hills and plains!!

It’s still vivid in my mind. On my travel to the country in Israel, many thoughts ran into my mind and shivers ran through my spine, when I imagined how Joseph took Mary to Bethlehem, inspite of her impending delivery to register according to their custom and the Flight to Egypt, two thousand years back… we travelled in a gearless automated Volvo on smooth roads. Undeniably necessary and deserving to honour Mary our Mother and have recourse through these healing titles: Mary Solace of Migrants… of Mercy… of Hope.

The future of humanity is in all of our hands if we reach out to each other.