The need of power infrastructure in Goa 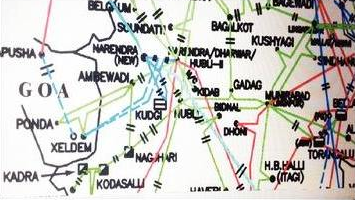 Any person driving through MES college, Zuari Nagar will notice a 33KV line on pylons (towers). This line was commissioned in the year 1976 and even today it serves Vasco city. Such lines which are built on towers (pylons) are robust and have useful service life of 50 years. Basically, such 400KV transmission lines are planned with 30 years in mind and are also capital intensive and cannot be constructed overnight.

Environmentalist usually come up with a slogan, we are eating into the future of children. But building such transmission lines with future vision, we are building a better infrastructure and future for our children.

When I landed in Goa in Feb 1970, Ponda had the main receiving station for power from Karnataka. I visited and remember that the load was 14 MW. The demand of Goa was doubling in 10-year in low growth period and in seven years in high growth period. It is not the number of consumer but the demand in MW and energy in MUnits.

Domestic demand does not remain static. Every year people add power consuming appliances/for example in the last decade households purchased air conditioners, geysers, etc. Growth in number of consumers only gives a false impression that power infrastructure is required only for industries.

Central Electricity Authority publishes Long Term Electricity Demand Forecast periodically. The 19th Forecast was published in Aug 2019 and it is as below:-

In June 1974, due to monsoon failure, Karnataka imposed power cut on Goa. The quota regime in power requirement for industries was introduced in 1974. Power connections to new industries were suspended. Power shortage is a major impediment for development and growth of state’s economy.

Because of then being an union territory and having good relations with Government of India, Goa was given the privilege of having a second source connection from Maharashtra. A 220KV line between Kolhapur and Ponda was erected and commissioned at 110KV initially in Dec 1978. Thus, the regime of quota was slowly brought to naught. Goa has thus luxury of getting power through Karnataka as well as Maharashtra.

All major grids in India were unified to form National Power Grid. The National Grid is the high-voltage electricity transmission network in mainland India, connecting power stations and major substations and ensuring that electricity generated anywhere in mainland India can be used to satisfy demand elsewhere. The National Grid is owned, and maintained by Power Grid Corporation of India, a Government of India Company. It is one of the largest operational synchronous grids in the world with 371.054 GW of installed power generation capacity as of June 30, 2020.

At present Goa has a 400 KV Power Grid owned substation at Colvale (Mapusa) and connected to the National Grid. The proposed 400KV line will ensure second connectivity with a Power Grid Substation in Karnataka. This double connection to National Grid will insulate Goa from shortages.

The above Grid Map available with Ministry of Power indicates also the formation of 400KV network within Goa by interconnecting National Grid with proposed substation at Xeldem with Colvale substation. Thus Goa will become part of a robust National Grid.

The earliest 110KV line from Hubli to Ponda was laid through Anmod Ghats in the year 1965. After the 220KV line from Hubli connecting Xeldem was commissioned, a portion of this line is still not being used and this transmission corridor can be gainfully used with least widening to accommodate the proposed 400KV line.

Electricity Department has no policy in place for management of vegetation under and along side of transmission lines. A proper vegetation management policy will give confidence to the public.

Such EHV lines do affect animals and plants besides humans due to low frequency electro magnetic radiation. But there are simple safe guards which are to be observed while designing and implementing the line.

In spite having access to adequate power, the reliability of retail supply need much to be desired. Adequate development of intra State transmission has not taken place. Even where 220/33kv transformers were installed (Cuncolim and Amona), it is not sufficiently loaded. Forming a robust downstream network of 220KV, 110KV and 33KV lines with power flow analysis and contingency analysis is the need of hour.

(The author is a Senior Electrical Engineer with 52 years of experience, transmission, distribution and utilisation of power)