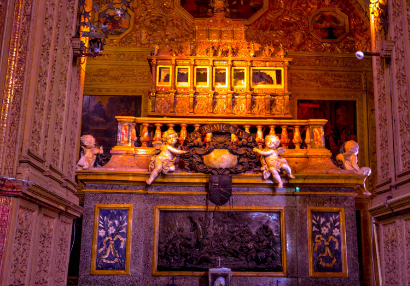 We may have been separated from the church and its activities, lamented one niz Goenkar, but we cannot be separated from Goencho Saib, the unforgettable saint, he sighed reminiscing the past. Rightly so, even though the front of Basilica of Bom Jesus is deserted and empty for the novena services in preparation for the feast of St Francis Xavier and a few tourists walk into the church gingerly, novena Masses are beamed into our homes on TV screens through different media sources making it easy for the devotees to keep in touch with the annual religious practices. To some who went on an annual pilgrimage to Old Goa as a family  tradition, this year remains incomplete with an unexpected break. However, St Xavier remains a powerful intercessor  to his devotees to strength their faith in God .

COVID-19 pandemic has given us an opportunity to introspect and know where we have gone stray and come to God who waits for us to return into his ever loving embrace. One can never know the Father till we have experienced his unfailing love and then there is unexpected change in our lives. Said the Rector of the Basilca: all these years we have been having the services outside the Bom Jesus church in the front under a massive pandal erected for the purpose but this year we have it inside the church and the media helping to reach out to every home through different electronic platforms. Indeed, the word of God resounds in every home these days following the services with an intent to keep touch with the inspiring saint who is held high for giving us the faith that we be  saved for eternity. The sanctity of the church stays revived and upheld with Masses being said at the Altar in the Basilica.

What made Francis Xavier such a remarkable saint? But for St Ignatius of Loyola who constantly reminded Francis of his life being wasted with worldly interests and vanity of living, Francis Xavier would have been a lost personality today. After deeply pondering on the quote Ignatius Loyola used from the Bible: what does it profit a man to win the whole world and suffer the loss of his soul, Francis Xavier changed his mind and never turned around to look back from the path he was deviating. His exemplary life he lived is an inspiration to many of his devout followers living the same way. Francis Xavier lived with the poor, the down trodden, the helpless and the sick. He was at their services in their times of need and preaching the Good news that they may know God and accept him. Rightly so, he fought against the injustices meted out  to the sufferings. In doing so he forgot himself and remained deeply embedded in the love of God. For the life he lived and served God in being in the service of others, the Father rewarded St Francis Xavier with heavenly glory and his body to remain incorrupt since death. It stays so from December 3, 1552 when he died at the age of 46 on the island of Sichuan while on his journey to China. He was declared saint on March 22, 1622. He has his followers not only in Goa but the world over and his devotion grows day by day making St Francis Xavier truly a unforgettable saint.