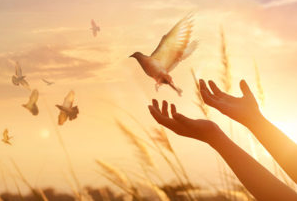 September 21 is celebrated as International Day of Peace.

While the world is experiencing one of the deadliest crises of pandemic Covid-19, let us analyse the crises in view of unpeaceful situation around the world.

Scientific explanation of the catastrophes is that when the natural laws are tempered by humans the nature takes the revenge in the form of such calamities disturbing the peace on the earth. Often diseases are emanating from biodiversity hotspots and it is said that the real reason for this is the excessive industrial activity and ecological imbalance in these areas. Because of the ecological disturbances – the micro-organisms that were confined to animals have started entering the human body and becoming the reason for new diseases.

However moral and spiritual law governs the world to a large extent to maintain peace and harmony on earth. As said “Peace comes when there is no cloud between us and God”.

Human actions in the form of violence, injustice, oppression,  mistreatment, killings, hatred, corruption, propagandas, rapes, indecencies, racism are forms of terrorism which are condemned by the Creator who likes justice, love, respect, honour, equality, peace and wants the humans to establish these norms in the world for harmonious living of all creatures especially the mankind.

As soon as humans tend to loose grip on the morals and standards set for spending their life on earth, the consequence is in the form of such calamities which leave mankind in a helpless state totally submitting him to the Almighty God - the Master of all affairs and who is ultimate hope for all.

The calamities are  small examples of wrath of the Almighty to teach the mankind to turn back to right path on right time to avoid greater harm to the self. The most merciful God loves mankind and hence through means of calamities warns the mankind to reform themselves just as a caring and loving mother punishes the child on his misbehaviour to reform the child. God loves to forgive but when the oppression reaches to a certain stage causing unlimited pain to others, wrath of God befalls in the form of calamities.

Not many deny the authority of God in their lives, the message of the messengers and accountability of worldly life in hereafter and its consequences in the form of heaven and hell - a belief which is foundation of all religions and strong source for moral upliftment and raising oneself above humanity. But this belief is nowhere found in actions today.

The system of governance led in earliest times based on submission to God and fear of accountability during the Leadership of Khalifa Abu Bakr is narrated by Umar, the second Khalifa that he i.e. Umar used to serve an old blind lady with her daily chores in the darkness of night. One night he sensed that somebody has preceded him and has done all the work. When he sensed the same thing the next night, he vowed to discover who that person was. In the night that followed Umar came much early and hid himself waiting for the mysterious person to enter the house. When the man came, Umar caught him and found that behind a covered face there was none other than the Khalifa Abu Bakr. This incident highlights that the leadership working under obedience of God and valuing humanity result in developing such morals which are concerned about its subjects and anxious to serve them playing the role of a servant to his subjects and not Master and Dictator.

Wealth is come to only few powerful hands and poor are struggling even to get a morsel of food. Rich are becoming richer while poor are heading below poverty line. How can such a nation find peace and prosper where some are overloaded with wealth while others are treated in shameful inhuman manner ruling them out even from basic needs of food, clothing and shelter. Will the Creator ever approve such an indecent act to shower his blessings on any nation? No wonder we see economic damage of highest level to most developed nations of the world today including our own.

Even in this situation of Covid crises when the common people are struggling to survive, there are still others who have found opportunities to prosper their businesses by playing with the life of people while some others are trying their best to fulfil their agendas carelessly ignoring the need of the common people and diverting the attention towards baseless incidents, arguments and discussions. Ordinances are being passed and major policy decisions are taken without being discussed in Parliament. The poison and venom unleashed on all media platforms has even made things worse.

The ecosystem is so organised that it gifts sweet fruits if used in limited manner balancing all the creatures in harmony. This balance if tempered with extravagance and limits transgressed, lead to destruction. In such situation when the rightful citizens keep silent and promote more oppression it causes greater harm. Calamities are also result of such closed mouths and deaf ears because this careless attitude towards spread of evil is also equally responsible for spread of evil.

War was never a solution to prosperity of any Nation. History also witnesses the aftermaths of two great wars and their effects on the lives of people which took ages to recover.

Peace is the only solution which the world needs today that can be achieved by turning towards our one Lord, our Creator, our Master, knowing his message for mankind and Working for the betterment of humanity.