WHAT’S THE GOAL IN HOSTING THE ISL? 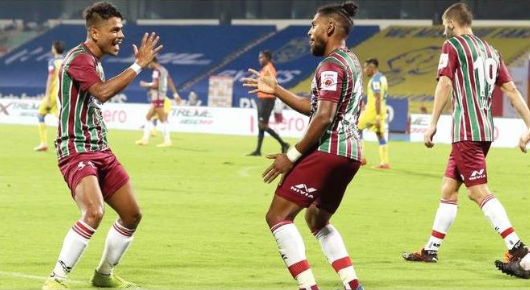 Four months, 115 matches, three stadiums, 11 teams, one State and an entire league in a bubble. This is the first time that something like this is occuring in the history of sports in Goa. The Indian Super League kicked off on Friday in Goa, and the buzz is entirely missing. The pandemic has transformed the entire league and for a change all the matches are being played in the State, without spectators on the stands and with the teams living, training and playing in a bubble. If early this year, somebody had predicted that this would be happening, that person would possibly have been scoffed at for forecasting a scenario that was improbable and impossible. But the situation left little choice to the ISL. It was either have it this way or not at all. And they decided to have it. The good news is that the new cases of COVID-19 are on the decline, and since this is long four months of playing, there exists the chance the speactators may be allowed into stadiums at some point, but that depends entirely on the pandemic situation improving further, so let’s not make any attemtps to try and predict what can happen.

It was believed that being the host State of the ISL would be beneficial to the Goan economy that is desperately in need of a major boost, but that bubble has burst. Goa earns from the renting out of the stadiums for the matches and for the practice grounds. Goa earns from the booking of hotel rooms for the teams and support staff. Goa earns from the food and beverage bills that will be raked up during the long stay in the State. But Goa only partly earns from transporation of the teams to the practice grounds and the playing stadiums, as many of the teams have opted for outstation logistics firms to transport their players and staff. Goa also does not earn from the ground management of the stadium as the arrangements were given to firms from outside the State, with even generators procured from outisde. With no spectators allowed the myriad smaller business that would earn during the ISL will also not see anything dropping into their kitty. Goa does not earn from the security point of view as the contract has gone to a firm from outside the State. So, how does Goa benefit, if at all it does?

That’s from the economic point of view. What about from the sports angle? Is football getting a boost in the State from the hosting of the ISL? Will the standard of football improve after the four-month bonanza of soccer that will be held in the State and witnessed on television screens?

The matches are being played to empty stadiums, so budding footballers will not get the chance to be on the stands see some excellent footwork by the players, who come from various countries, and pick up a few pointers by watching. Recall that the league has a tremendous following from young and old, and there are Goan footballers who aspire to play in the same league. Wouldn’t this be a wonderful opportunity for them to get to the playing field and see their heroes in action? There are young boys who have been hanging out at the practice sessions of the teams, watching the moves of the players, and sometimes hollering out the names of their favourites. The interest is there, wouldn’t it be advisable to allow these budding footballers to watch the matches? Not having spectators due to the pandemic is acceptable, but concessions could be made for young players who would be interested in watching the game. This would surely help improve the standard of the footballers in Goa, and the State definitely needs a better crop of players for the game to retain the high standards that Goa has been known for.

Similarly, there are in Goa at present 11 teams with 11 coaches who have been handpicked mainly from Europe, why doesn’t the Goa Football Association get some of its local coaches to be trained by these experts? We know that the teams are in a bubble, and that there is danger of COVID-19 infection in case of contact with persons outside the bubble, but arrangements can still be made. Goa Football Association could have a set of selected Goan coaches enter the bubble and be with the team, shadowing the coaches and picking up tips and tricks from them, with the associaton meeting the expenses. Would this be so very difficult for Goa Football Association to arrange a programme such as this for its coaches? The local coaches would of course have to keep secret the tactics of the coasches and not leak these out to the opposing teams. But, imagine what at great training it would be. Similarly with refereeing. There is only one Goan referee in the ISL this season because the other referees were unable to join and remain in the bubble for five full months. A rotation system of lesser time in the bubble could have been arranged so as to accommodate more of them in the arbitration of the matches.

What Goa will retain at the end of the ISL is the football grounds. Not only the three grounds where the matches will be played, but also the practice grounds that have been given a thorough makeover by ISL and brought up to international standards. Even the casual observer who sees the turf will agree with the high quality of work. What will be required is maintenance of these grounds after the ISL ends and the teams return to their home cities. The managers of the grounds cannot complain of lack of funds for maintenance, as they are currently earning a fair amount from the rent of these grounds, which can be utilised for the upkeep of the fields. The ISL has just started, there are close to four months before it ends. A lot can still be done to give back to the hosts more than just the playing fields. Since the government decided to allow the ISL to be played in Goa, it should look to how it can benefit from it, besides just hiring out of grounds and hotel rooms.