WHATEVER HAPPENED TO REUSE AND RECYCLE?

Beaches with broken glass pieces will not bring more tourists to the State, it will act as a deterrent to potential tourists 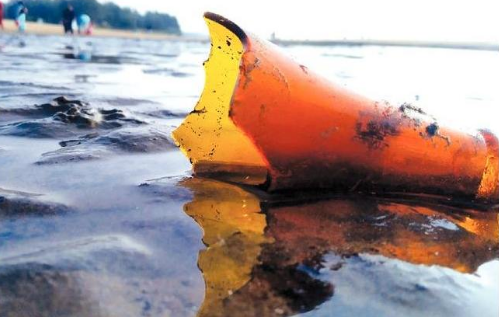 The shards of glass, mainly of broken beer bottles, on the beaches of Goa on New Year’s Day were chilling evidence of partying the night before by the thousands of tourists that had driven down to the State to welcome 2021 and the unconcern of how they left the beach after their night of partying. Goa has opened its gates to tourists, despite misgivings from certain quarters that this could go horribly wrong due to the COVID-19 pandemic that is yet to abate. The Health Minister, a day after the New Year celebration, has warned of a possible spike of COVID-19 cases, as pandemic norms were not followed. Due to economic reasons tourism businesses were allowed to recommence operations, which they did. But behavior such as this from the visitors is not what Goa expected from the tourists that it has welcomed to the State.

Goa now faces not just the threat of a rise in COVID-19 cases because tourists ignored the pandemic norms, but also the danger of glass pieces cutting into the bare feet of people walking on the silvery sands. We have experienced this earlier too, as there have been instances of injuries due to glass pieces in the sand, and it is other tourists themselves who have complained of the menace. So if there are some visitors who ignore social propriety and discard broken glassware on the beaches, there are others who are affected by the actions of those who visited the beach prior to them. Yet, throwing glass bottles onto the sand would lead to littering, as they would not break. What we see are broken bottles of beer with sharp edges that can cut through the bare foot of an unsuspecting visitor to the beach. This is absolutely criminal, and cannot be condoned, as it appears that the bottles have been deliberately broken. Annually, Goa spends crores of rupees on beach cleaning, to keep the sands clean for the tourists, not for them to behave in such manner. But even if the larger pieces of glass are collected and disposed, there will still remain small chinks that can hurt visitors, especially children who play in the sand.

There has been outrage on social media over this littering, especially of the broken glass bottles, but that does not solve the problem. What is required are solutions. So here’s a question: Whatever happened to reuse and recycle? Have they been forgotten, or just discarded like the bottles on the beaches?

Take for instance the fact that there was a time, just a few years ago, when bottles once emptied would be exchanged back at the retailer, or handed over for a return of the deposit that had been paid. Today most bottling companies do not accept the bottles back. They are made for one-time use. Can’t the government frame a law that makes it mandatory for the companies to collect the bottles from the wholesaler or the retailer? If the consumer is made to keep a hefty deposit with the seller for every bottle that has been picked up, a deposit that he will get when returning the bottle, won’t this reduce the waste that is created? It may not wholly eliminate the problem, but there will be a reduction of it. As a people we are always looking for schemes, so why not one that makes bottle collection compulsory by the bottling companies?

There is another problem that the bottles that are not taken back by the bottling companies create, as they are disposed off as garbage. According to estimates, there are about 200 tonnes of glass waste that is generated on a monthly basis in Goa, and the State does not have the facilities to manage this. The management of the Saligao Waste Treatment plant is on record that broken glass bottles hamper their operations, and injure workers manually segregating garbage. Goa Waste Management Corporation had in the past even moved a proposal to the Excise Department and the government to ban glass bottles and instead promote cans and tetra packs. Until now nothing has come out of this. Perhaps the pictures of the glass shards on the beaches will urge the government to move on the proposal.

However, it is not just the concern of the government and it cannot be entirely blames, but the tourists too have a responsibility and there is need of a major change in their behaviour when holidaying in Goa. If they won’t change their manners willingly, then they would have to be fined. Glass bottles are banned from the beaches of Goa. A person caught with a bottle can be fined. Just because there is inadequate personnel to man the beaches of the State, especially on a day when thousands of people have decided that the shore will be where they bring in the New Year, does not mean that the tourists can drink and throw the bottles on the sand? This is a clear reflection on the attitude of the tourists who lack civic sense and also social propriety.

It has to also be the duty of the tourism industry of the State to enlighten tourists to the need to keep the beaches clean. If the tourism industry is earning from the beaches, it is also their duty to keep them clean. Beaches with broken glass pieces will not bring more tourists to the State, it will in fact act as a deterrent to potential tourists. The pictures of the glass pieces on the sands of Goa have been posted on social media and gone across the world. Tourists considering a holiday in the State could amend their plans because of this.

The aftermath of the New Year celebration should be a wake-up call for the government, the industry and the tourists to the peril of glass pieces on the beaches of the State. It cannot be allowed to reoccur, and before the next year is brought in the State and stakeholders have to be discover a solution to it, failing which it can have major negative repercussions on the industry.